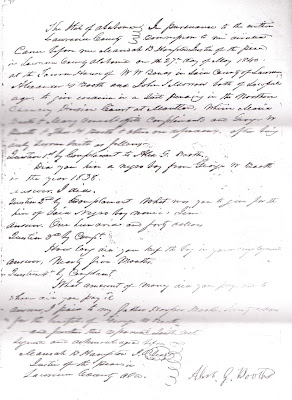 One of the documents I have waited a great deal of time for has arrived. This is the first page of the Chancery Suit between Mariah Winfield Booth, et al, and her second husband, George Washington Booth and his brother, Thomas Harper Booth.

The document was simply an inquisition into whether Maria was owed money given to her husband during the hire of two servants by his relatives. I am awaiting other documents. Mariah and Dr. Booth may have been separated by then. Married couples had trouble in the 1800's just as much as they do today. They just handled it differently. 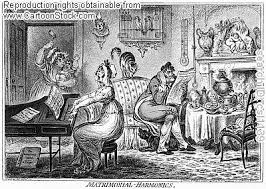 I am awaiting other documents that might help me paint a broader picture, but this one was very important in helping me to establish a few things.

First: The less than 5 year old girl shown as a dash in the home of James Moffett in 1830 did not die. She is listed with her mother in this chancery suit and her name was Mary Ann Moffett.

Second: Mariah Booth Winfield Booth was alive and well in 1840.

Third: I know where Dr. George Washington Booth settled with his wife (and her daughter), after their 1836 marriage. He took her back to his home is Lawrence County, Alabama.

But more research is needed and other questions arise.

2) Did Mary Ann Moffett marry, and if so who? And where did she live? And when did she die? Did she have descendants?

3) Did Mariah and Washington have any children?

Every detail is a piece of a puzzle. Will it ever be complete?

The document reads:  The State of Alabama Lawrence County in pursuance to the written....came before me Manaseah B Hampton, Justice of the Peace....on the 27th day of May 1840, at the Town House of W. W. Bower...Alexander G Booth and John J Morrow both of legal age... wherein Mariah Booth and Mary Ann Moffitt complained against George W. Booth and Thomas H. Booth...

To Alex Booth was asked 4 questions:

Did you hire a negro boy from George W Booth in the year 1838?

What was you to give for the hire of said Negro Boy named Jim?

Answer: One hundred and forty dollars

How long did you keep the boy in your employment?

Answer: I paid to my father Harper Booth forty dollars for the benefit of George W. Booth.

The same questions were asked of a Mr. John J Morrow concerning the hire of "Bill".

Mariah and her daughters complaint was that they were entitled to a share of the money paid for the hiring due to the fact that the boys were left to her as part of her inheritance and that her husband, possibly estranged, owed that share to her.

Hopefully, the 1838 documents will make things even more clear.

Now to find out more about Mary Ann Moffett.