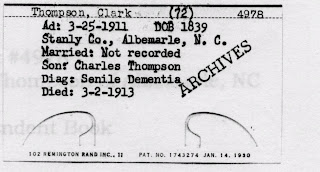 Biologically, we have 2 parents, 4 grandparents, 8 great-grandparents, 16 great-great grandparents, 32 great, great, great grandparents and so on to eternity. Some of us are lucky enough to have more than that when extra branches are grafted into our Family Tree. I was one of those fortunate persons. I have two Dads. One is biological and we have reunited and I love him. The other was a gift from God who I was blessed with as the father who raised me and his parents were wonderful people who accepted me as their grandchild, although I was about 3 or 4 when they met me. Their family tree is mine too, even though my DNA test will not connect me to any cousins on that side. 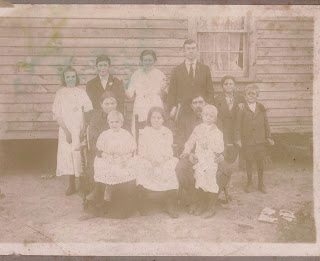 The little boy to the far right in this photo, on the back row in the suit and the knickers is William Joseph Thompson. He was my grandfather and died in 1992. Seated are his parents, Thomas Jefferson Thompson and Mollie Dennis Thompson. Mollie died July 26, 1917, leaving her children motherless. Her youngest, Tom Jr, was born in 1915. Only Arlie, Cletus and Tom were younger than my grandfather, who was born in 1905. It appears that the youngest was not yet born in this photo, so this photo was made sometime between 1911 and 1914.

Thomas Jefferson Thompson, the man seated with James Arlie Thompson on his knee, was born April 20, 1868 in Anson County and died December 3, 1942 in Albemarle, North Carolina. At some point the family had moved to Montgomery County from Anson and he raised his 12 children on the banks of the PeeDee River in the community of El Dorado, Montgomery County, North Carolina.

Clark was a Civil War Veteran, having enlisted in Montgomery County on March 1, 1862.


His last wife would be a lady known as Julina or Lina, and they would reside in Albemarle.

Posted by Jobs Children at 6:48 PM