The Woman who loved Mauldins 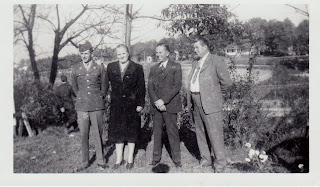 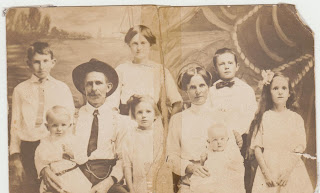 Wincie Ann Mauldin was born October 4, 1884 in the Fork area near Norwood in Southern Stanly County, North Carolina. This area was near the confluence of the PeeDee and Rocky Rivers and a historically fertile ground. Wincie was the daughter of  Frank Washington Mauldin and Martha Margaret Russell.

Wincey was an ancestor I actually remember. She was born October 4, 1884 and died October 12 1864. I was 4 and a half. She was my great-grandmother. In the family portrait, my grandmother is the little girl standing in between her parents. The two boys standing are older brothers Grover (left) and Fred (right). The older girl in the back is not a sister, but a young lady they had taken in that lived with them. I had heard her name once, but now can not recall it. As both my grandmother and great-grandmother have passed and neither my mother or I can remember her name, we may never again know. I believe she was a Russell, but if anyone recognizes her from old photos, please let me know.

I have few, but very distinct memories of Wincey Ann Mauldin. One was on a day I believe she was babysitting me. I was probably 3 or 4. She had a scaley bark tree in her yard with fushia flowers and tempting branches. I had climbed up it and was sitting on a brach that was not supporting of my weight. I did not fall out of the tree when the branch broke, but remained hanging to the trunk, but slid down, with the remnants of the branch slicing open my leg as I slid. It was a long scratch, but not a deep one. Grandma Mauldin as we called her, was keeping an eye on me from her wide kitchen window as she was busy in it, and hurried out as fast as she could to get me. She was a large boned, tall, stocky built woman and she scooped me up in her arms and carried me into the kitchen and sat me on the counter with it tiny checkered pattern tiles. She turned on the faucet and grabbed a towel and wiped the blood off and applied mecurochrome and bandaids. She was a strong, funny and caring woman.

I also remember how when we (her greats and grands) cried, she would hold her palm under our cheeks and  say "Cry me a handful so I can water my flowerboxes", and we would stop. I remember the layout of her living room as if I had walked in it yesterday, the brown leather recliners and the ancient clock with it's ticks and tongs. She seemed to be the healthiest old lady in the world until the end, having the walk and the whisk, her apron bustling, of a much younger lady.

My mother always said that Great-grandma Mauldin was German and Great-grandma Davis was Dutch, but my research has revealed that neither were true. While there was a lot of different nationalities in their family trees, for the most part they were both of English decent.

My great-grandparents, during my brief 4 years of knowing them, were neighbors, practically, living about a block apart on streets that ran parallel to each other. There was a gravel path that led between the two streets. Sunday was visiting day and which ever grandparents house we were parked at, if the weather was good, we would just walk down the path to visit the other. Many summer nights were spent with the adults sitting on the long front porches gossiping and catching up while the children played tag and caught lightening bugs in the yard.

I called Wincey Ann the woman who loved Mauldins because she was born Wincey Ann Mauldin to Frank Washington Mauldin and Martha Margaret Russell Mauldin in 1884. On December 29, 1900, just after Christmas, she married Walter Jonah Mauldin, son of  James Duncan Mauldin and Margaret W Soloman Mauldin. Jonah was the father of her children and died in 1930. They had Grover Littleton in 1901, James Fred (Fred) 1903, Ethel Pearl 1906, Annie Maude 1909, Walter Lee 1911, Riller 1913, Holly Benton 1916, Robert Franklin 1919, Ada Louise in 1922. Holly and Rilla or Riller, would both die as young children. Wincy's sons would serve their country in the World Wars. The top photo shows Wincy with her youngest son Robert to her left and her sons Grover and Fred to her right. Grover is the stocky one and Fred the smaller.

After she was widowed, she would marry a widower, James William Mauldin, son of Franklin Mannasseh Mauldin and Ella Sophronia Huckabee or "Phronie". It was often said that she was "born a Mauldin, married a Mauldin and when he died, she married another Mauldin.

Frank Washington Mauldin and James Duncan Mauldin were brothers, both sons of Thomas Alexander Mauldin, making Wincy and Jonah first cousins. All of the Stanly County Mauldins are related in some way, and she and Papa Jim, her second husband, were not as closely related, but their trees collide about 4 generations back, so they were related, but not as closely as she and Jonah.

Papa Jim was a kindly grandfather to us, and a good stepfather for her children. He was a soft-spoken, gentle man. He outlived Wincey by two years, leaving us in 1966. I remember he would always give us great-grandchildren an old silver dollar for our birthdays. I have some he gave me with dates into the 1800's.

My last memories of Wincy were of the week she took ill. I remember the closed bedroom door and the saddness that prevailed. Aunt Pearl and her husband, Clifford Thompson and family coming in from Charlotte, Uncle Robert and his wife Aunt Leona, Aunt Louise, the youngest,  and her husband Uncle Ralph Vanhoy. All of the cousins gathering in. Grandma being overtaken by emotion. Aunt Louise who had a voice that carried, calling Mutt and Doogar, what she called my grandparents, Maude and Lewis Davis, to come hurry. The clock on the wall tick tock tick tock, the neglected flower boxes in need of watering. And Greatgrandma Wincy Ann Mauldin Mauldin Mauldin passing away. The brown-eyed tall lady who loved Mauldins. 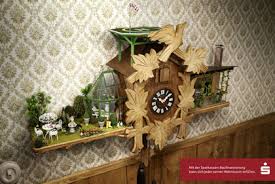 Posted by Jobs Children at 7:30 AM