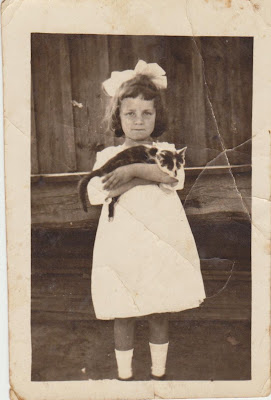 My grandmother, Hattie Helen Hudson Thompson, was born on September 3, 1899, just before the dawn of the Twentieth Century. Her little sister, Edith J. Hudson, was born on May 28, 1915. Hattie was nearly 16 years old when Edith was born.

Their mother, Judie E Aldridge Hudson, would died on Dec 23, just before Christmas, in 1922. Grandma was adult by then, and married to her first husband, Eleazor McSwain, and just widowed, as he was is World War I and died the same year.

Judie died of bronchial pneumonia, following influenza. The same disease, pnuemonia, that would claim Edith in less than a decade.  Her youngest child, Edith, was only 7 years old.

I can tell how much my grandmother loved her little sister by all the photos she had of her. She had dozens and dozens of photos in her box of Edith at various stages of life. She even had photos of Edith in her white casket. I feel those were too morbid to copy. Instead, I chose to celebrate the life of a young girl who was full of it and whom my grandmother adored. She must have been like a second mother to Edith from birth, and after their mother's death, she must have become a primary caretaker. 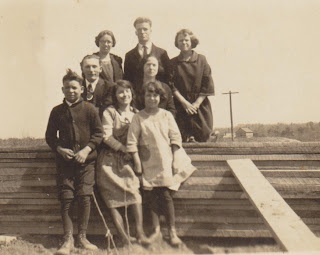 Top row, my Grandmother, Hattie H. Hudson McSwain, her brother Walter and his girlfriend Annie B Talbert. Second row were friends Olon Carrol and Ila Biles. First row, the younger Hudson siblings, Craven Reece Hudson, who I knew as Uncle Ted, Aunt JoAnne, who would marry a Pruitt and move to Greensboro, North Carolina and little Edith. This picture, judging from the approximate ages of the children, was made while Grandma's first husband was in service and just before the death of their mother. The wind and the sweaters suggest early fall and Judie would die in December. 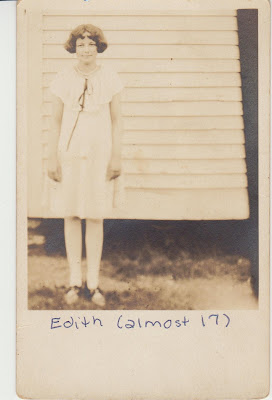 This is the first census that Edith would show up in. She is the child Julia, her middle name, age 5. The Joe A Hudson is actually JoAnne Hudson and Craven is Uncle Ted, Reece Craven Hudson. The two older daughters, Bessie and Hattie are married by this time, and little Robert Lee, born in 1910, only lived a year.


In the 1930 census, the family was counted twice. Grandma had already married my Grandpa, William Joseph Thompson, who was a little younger than she was, and they had moved to Albemarle. Living with them was Grandma's little sister Edith and Grandpa's father, Thomas Jefferson Thompson and his youngest brother, Tom Jr.  Being close in age, Tom and Edith may have been good friends.
This census taker made Edith a year older than she was. Maybe she had understood him to ask how old she would be on her next birthday instead of her last. He also designated her as a boarder instead of sister-in-law and he included her middle intial 'J". Edith and her brother Walter would be buried side by side under the same tombstone.

Posted by Jobs Children at 6:29 AM