James Robert Hudson was born on December the 8th, 1868 to an orphaned,  teenaged,  unwed mother, in Stanly County, North Carolina. Harvest season was over, if there was a harvest at all. Farms had been abandoned, fields lie untilled. The male population had been decimated, reduced largely to one of old men, young boys and crippled or blind soldiers. There were a few healthy survivors of the war, but not many. JR's mother had lost her own mother in childbirth at age 8. Then her father died in the war in 1862. The previous census had shown her living with her stepmother and two younger sisters. Her stepmother, Sarah Ann McSwain Hudson would remarry an elderly merchant, John Norwood and have more children. Half-sister Ella, born the year their father died, in 1862, would not show up again. Sister Sarah Ann, born the year their mother Sarah Ann Lee Hudson, died, would marry a Whitaker, son of Nelson and Sophia Murray Whitaker. In the first census JR Hudson shows up in, his unwed mother is living with her little sister Sarah and her husband. 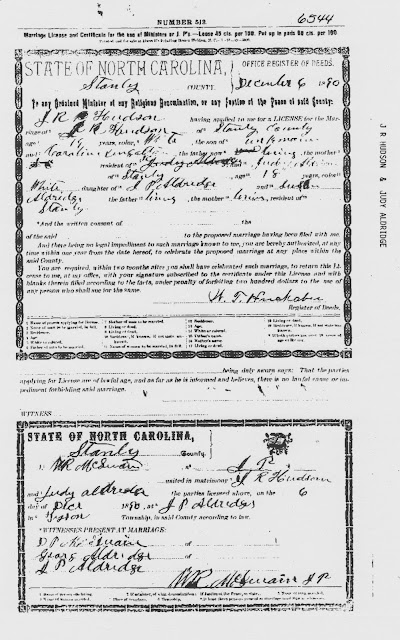 I remember when I was small, my grandmother telling me her father had been illegitimate and that her grandmother's name was Caroline Singleton. There were two Caroline Singleton's in the area. One born a Singleton and the other married a Singleton. I finally found the answer to who she was on her death certificate. The married Caroline Singleton had been born Caroline Hudson. A lightbulb went off and I realized, James Robert had been given his mother's maiden name, having been born when she was only 15 and unmarried. Her father was named, Burwell, and I discovered he was one of the sons of Hudson family patriarch, William Joshua Hudson, Jr, who lived nearly 100 years, who had not returned from the war. Everything fell into place.

On Dec 6, 1890, just two days before his 22nd birthday, J. R married  19 year old Judith E. "Judy" Aldridge, the daughter of J. Pink Aldridge and his wife Susan Floyd Aldridge. Her father Pink was a first cousin of my great, great grandmother on my mother's side, Frances Julina Aldridge Davis.
The marriage certificate list father as unknown and mother as Caroline Singleton. At age 27, Caroline had married Robert Dock Singleton, known as 'Dodie', the son of a shoemaker who had settled in the small growing town of Center, which would be renamed Norwood, after the Norwood brothers store.

JR and Judie would bring 8 children into the world, but not all at once. Bessie, the oldest, who would marry Henry Bunch, would not arrive until 5 years after the wedding in 1895, the second daughter, my grandmother, Hattie Helen Hudson McSwain Thompson, would not arrive until 1899. The 1900 census would find the young family living in the town of Norwood. The census indicates that JR was working as a farm laborer while his wife was housekeeping and that he owned his home, but it was a house and not a farm. The census also indicated that Judie had been the mother of 3 children with two living, Bessie and Hattie.

By 1910, JR and Judie had moved their young family into the country not far from Norwood Town, because they were still in Center Township. Center had once been what the area of Norwood was called, as it was a Centerpoint on the old road from Salisbury to the Cheraws, and the site of an early Methodist Camp Meeting site. Eventually, the old River town of Allenton, that predated Norwood by many decades, would be abandoned due to Thyphoid and other outbreaks and the survivors would move up to the old Camp Meeting grounds and the town of Norwood formed.

JR is listed as a farmer, not a farm laborer. He is renting his home, and it is a farm, not just a house. The census indicates that he and Judie, along with older daughters Bessie and Hattie, can read and write. Two more children have joined the family, Walter in 1901 and JoAnne, in 1905. The census indicates that Judie has born 6 children, 4 of whom are living. The sixth one was son Robert Lee, who was born in 1909 and died in 1910 and is buried in the same plot as his mother.

By the next census, JR has moved his family again, this time to the other side of the river in Anson County, in the township of Ansonville. He is running his own farm and his family are working on that farm as laborers. Older daughters Bessie and Hattie are married by then, Bessie to Henry Bunch from Wake County, North Carolina and Hattie to Eleazor McSwain from the Center and Tyson area of Stanly County. Both sisters would marry young men who would fight in World War I. Henry Bunch would survive. Eleazor McSwain would return ill and die.

Bessie and Henry Bunch would set up houskeeping near Mountain Creek, near New London in Harris Township, Stanly County. Hattie and Eleazor in Norwood. Bessie and Henry would have 3 children as families during this era and into the Great Depression, would get smaller. They were Cora, named after Henry's mother, Henry Jr, who would be called Herman, and Walter, named after the sister's beloved younger brother, Walter C. Hudson. Hattie would remarry, a younger man, William J Thompson and have one son, named Robert William, after his father and his grandfather, James Robert Hudson.

Henry Bunch, Sr's death certificate reveals the middle name of his wife Bessie, who is otherwise just shown as Bessie F. Hudson Bunch. The 'F' stands for Freeman. Not a typical middle name for a daughter. If JR and Judie were to chose a family surname as a middle name for their firstborn, would they not have chosen a family surname, like Aldridge, Judie's maiden name, or Floyd, her mother's maiden name? Their other daughters were given feminine maiden names. Could Freeman be a clue as to who JR's father was?

In 1920, Craven Reece Hudson (1912) and Edith Julia Hudson (1915), have joined the family. I would know Craven Reece Hudson as Uncle Ted and Edith, I would never know. She died just short of her 17th birthday.  Shortly before Christmas in 1922, on the 18th of December, Judie Hudson would die of Bronchial Pneumonia, following influenza. The "Flu" as we know it, was a very deadly disease in those days. Today, it might knock us out of a few days of work or school. 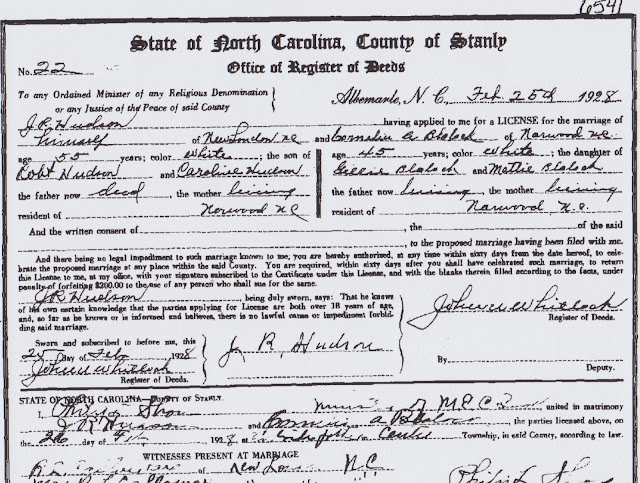 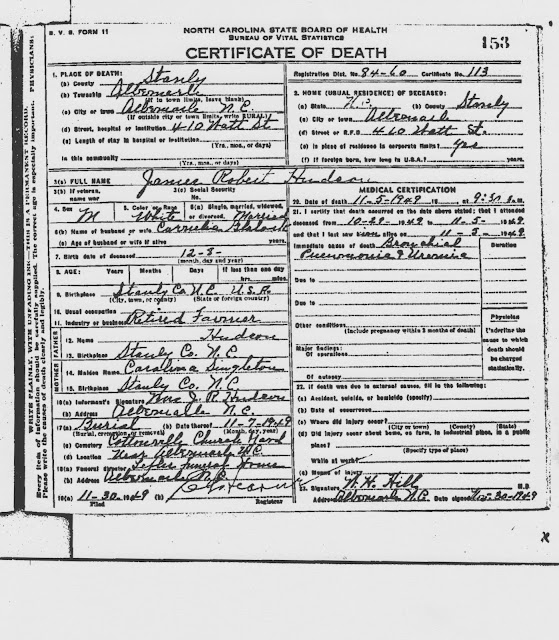 In 1930, JR and his second wife Nealie are living in Harris, at the end of Mountain Creek Road, in the Harris Community. I remember going into this old house as a young child, while my grandmother was visiting the children of her sister Bessie, Cora Bunch Williams and Herman and Eula Bunch, whose families remained on this road and on this land. I remember her finding treasures and showing me old schoolbooks she used as a child that were stored there. In 1930, youngest son Craven Reece (Ted) was living with his father at age 18, while 15 year old Edith was living in Albemarle with her sister Hattie and her husband Will Thompson. JR is listed as a farmer and Ted is listed as working at the brickyard. The Yadkin Brickyard operated until just a few years ago, not very far from where the Hudsons lived at this time. By 1940, Ted had married and moved on and older son Walter had moved back home. Walter had never married, had been a soldier and in the previous census, was working in Albemarle as a jailor at the County Jail. JR was still farming up on Mountain Creek Road between New London and Badin, right off of Hwy 740.
James Robert Hudson would not quite make another census, he died on November 5, 1949 of Bronchial pneumonia, anemia and cause unknown. Basically, the same disease that killed his first wife and daughter Edith.  He was 78 years old, a retired farmer. Both wives, Judy Aldridge and Cornelia Blalock are listed.
His father is listed only as Hudson, his mother as Caroline Singleton. On his marriage license to Cornelia Blalock, his father is listed as Robert Hudson and his mother as Caroline Hudson. Was his father really a Hudson, a relative of young Caroline or was this a vague reference to his stepfather, Robert "Dodie" Singleton and the clerk just assumed that his name was Hudson and JR maybe too embarrassed to offer a correction, not wanting his new bride to know the circumstances of his birth. Or was his father really Robert Hudson. Or was his oldest daughters middle name "Freeman" a hint as to his biological heritage. There were no Freemans in either JR or Judie's family tree. We may never know.
My Daddy, Robert Thompson, bears a strong resemblance to his grandfather in photos, as his mother Hattie, bore a strong resemblance to JR's mother Caroline. They both carry the soft, deep blue eyes and Daddy had JR's ears and shape of head and face and inherited the early whitening of the hair. It would be terrific if some biological descendants of JR Hudson would all get together and have a DNA test and compare it to others on Ancestry.com and she what unknown distant cousins pop up. Rule out the ones who come from other parts of their family tree and see what unknown connections who lived in the area shortly after the Civil War they have in common. This might determine JR's real surname. Until then, JR will continue to be a broken branch on the family tree. James Robert, father unknown.