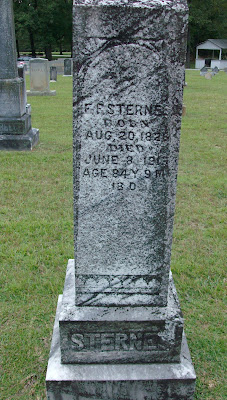 Frederick F Starnes or Sterns is buried in Meadow Creek Primitive Baptist Church Cemetary near Locust,  in Stanly County, North Carolina. The cemetary is in close proximity to both Mecklenburg and Cabarrus Counties. F. F. Starnes spent his last years in Mecklenburg, but most of his life in Cabarrus, and part of his life in Union County.

He has been a phantom to researchers and descendants. The reason has been two little letters. In a census, the census taker notated that he was born in Georgia. This part I have not verified as true or not. At present, I am trying to find proof that his father was in Georgia, at least for a little while, long enough for his oldest son to be born there.

And do I know who is parents were...sure! Was it difficult to figure it out? No. Why someone hasn't before me, I have no idea. I guess they are seeing for the fruit and not looking up at the tree.

If you find an apple under an apple tree, surrounded by other apples, the probability that it fell from that tree. Now, it is certainly possible that someone brought an apple from many many miles away and just randomly placed it under that tree. Possible, but not probable. I mean, the apple could have been zapped there by an alien if you watch enough TV. But not likely.
Fred and Mary first show up in the 1860 census of Union County. He is listed next to his father Frederick Starnes and mother Bettie.  He is not in the 1850 census, that I can yet locate, but both his father Frederick Starnes and his grandfather, Frederick Starnes, are.

He is not living in the household of the Gaddy's. This is a computer glitch, that failed to separate households. 'Allace' refers to daughter Sarah Alice who would marry Wiley Monroe Linker and 'Ollivy' refers to Margaret 'Leavy' Starnes, my ancestress, who married Robert Lemmonds. John is only listed in this census, so likely died as a child, prior to the move to the Rocky River community of Cabarrus County. Several of the Starnes children died young. Most of them buried at Rocky River Presbyterian Church in Cabarrus County. 
By 1870, the family was living in Cabarrus County. Thomas, Martha and Della have been born.


And then the 1880. Frederick L Starnes, Georgia Ann and Daisy have been born. Grandma Martha Byrum has came to live with the family as well. 
OVERVIEW:
48th Infantry Regiment completed its organization in March, 1862, at Camp Mangum, near Raleigh, North Carolina. Men of this unit were recruited in the counties of Union, Davidson, Iredell, Moore, Chatham, and Forsyth. Ordered to Virginia, the regiment was assigned to General J.G. Walker's and Cooke's Brigade. It fought with the Army of Northern Virginia from the Seven Days' Battles to Fredericksburg, then moved to Pocataligo, South Carolina, where it was stationed until August, 1863. Returning to Virginia, the 48th was involved in the conflicts at Bristoe, The Wilderness, Spotsylvania, and Cold Harbor. It then endured the hardships of the Petersburg siege south of the James River and the Appomattox operations. It reported 18 killed and 70 wounded at Oak Grove, lost over fifty percent of the 400 in the Maryland Campaign, and sustained 175 casualties at Fredericksburg and 123 at Bristoe. The unit surrendered with 12 officers and 87 men. Its commanders were Colonels Robert C. Hill and Samuel H. Walkup; Lieutenant Colonel Albert A. Hill; and Majors B.R. Huske, William H. Jones, and Francis L. Wiatt.

He was held as a prisoner of war. Afterwards, he settled in Cabarrus County, with his wife Mary Byrum. From there, he is easily traced. It is beforehand that is the mystery.