Who are you Ann Howell? Another mystery in the search for Kitty Davis's husband and who killed cousin Hortense.

While trying to determine who the mysterious E. W. Cox who married Kitty Davis actually was, I came across perhaps a distant cousin and another mystery. The Edward Cox who might be the guy, is related to a Howell family who originated in Cedar Hill, Anson County.

Now, that brings me back to Job's Children. Job's wife Sarah Winfield had 4 children by her first husband, Richard Howell who died in 1802. Peter, John W, Jordan and Charlotte. John W and Jordan moved to Cumberland County, although I know Jordan's daughter Clarissa was present in Stanly during the time of Job's death. She and her husband Jeremiah show up in one census and Jeremiah in Job's estate papers in 1853 before they move West. Charlotte, and her husband the Rev. Levi Stancill moved to Georgia. Peter, the oldest, remained in Anson, although he often shows up in Stanly county records, and bought out his siblings share of Richard's estate. Peter was born around 1794, and the early 1800 Howells in Cedar Hill, which you are in immediately after crossing the river, were his children.

Then there is Ann and her children.


Cedar Hill would eventually be known as part of Ansonville, although a sign designating the community still stands and it is located in the 6 miles between Ansonville and Norwood along Highway 52. Tom Howell is listed as a grandson. It is unknown exactly how the child James Burt is connected to the family. Araminta, Elizabeth, Hugh and Martha are her children. 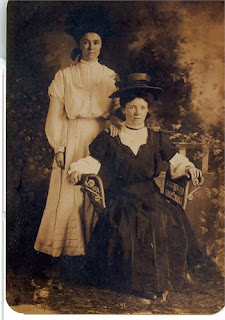 Araminta Howell Mullis and daughter Annie.
Lizzie and Araminta's descendants have been traced. No further sign of Martha and Hugh have been found. Yet.

Lizzie (Mary Elizabeth) Howell Ledbetter, who went back to her maiden name when her husband ran off. 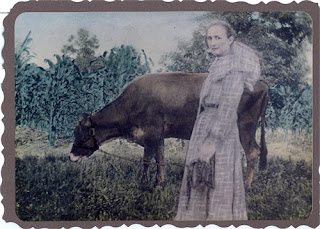 Lizzie and her cow.


List of Peter Howells household in 1850 in Cedar Hill.


In 1860. Florence and Robert were grandchildren.

Peter also appears in court records taking guardianship of grandchildren Teresa and Jonathan. But that is another mystery entirely.