In today's concrete cities, we plunge into the jungle-ish mass of kudzu-covered forests that were once over-plowed fields that caused ancesters to migrate when the fields failed to yield, or barely distinct trails that were once the most traveled roads. Waterways have been the most helpful landmarks when trying to locate exactly where an ancestor lived, as they are the least changed, but most of them have fallen victim to the hand of man as well. Damns have created huge man-made lakes that have left entire towns under water, a reason many of our more recent ancestors left the homes granted to their fathers and grandfathers and moved into towns during the industrial years.

Finding abandoned homesites can be difficult, if not impossible, but there are hints, beyond a rooftop peaking  through the trees, or even just nothing left but a chimney. Trees are our best allies. Especially certain kinds of trees. See a huge square area between some lumbering old oaks surrounded by young pines or scrub trees? A house or building likely existed there in years past. See a grove of magnolias? They might be marking an abandoned graveyard, or the entrance to a past driveway. In my searches, I found that certain ornamental plants must have been passed from neighbor to neighbor, from mother to daughter and so-forth, and some homefronts and gardens that were obviously meticulously tended by a devoted gardener in one day long gone, had now survived their planter and still marked the area where the home was, or is buried. Seeing hints of magnolias through the trees or huge groves of wisteria, or in very early spring, masses of daffodils along the way hint that someone once lived here. 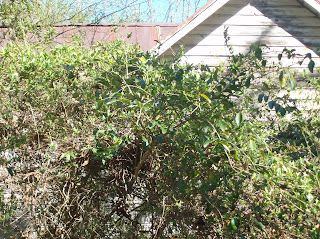 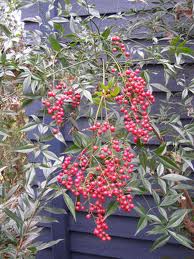 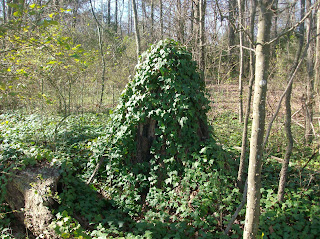 In hunting the homes of Peter Howell and his sons, in North Anson County, in the old Cedar Hill township along Howell and Kendall roads, all of which are not yet paved, I found old driveways lined with ferns and Nandina bushes everywhere. These were bushes my grandmothers had around there front porches, which have decorative red berries that I used for pretend foods for my dolls in my imaginary tea parties.

Ivy was another common decorative plant that can be a taletail sign of an ancestorial abode, and can totally hide a rock wall or entrance to a driveway. 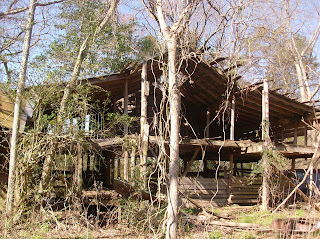 This looks to be an old barn or stable that was on the Howell property, that was of some substantial size. Vines and scrub trees had taken over, but enough of the structure remained to give a hint of its former self. Sometimes, rusty old horse-drawn farmer equipment will remain inside or nearby. On the Howell property, several old farm buildings lined a dry creek bed.

There were the remains of 3 or more two story farmhouses, not very far from each other and not all of them near a road, but a clear path leading from one to the other. The family must have stayed close together for each others aid in running the farm.
While winter time loss of leaves will revel more of the hidden treasures, early spring will give tailtale signs of a lady trying to beautify her home.

Posted by Jobs Children at 7:24 AM