Moriah Murray was one of the middle daughters of Jesse Murray who died in Stanly County, North Carolina. Her exact age was not known, but she was old enough to have teenagers in 1850. Her estate was first brought to court during the August term of  the North Carolina Court of Pleas and Quarter Session in the year 1854.

The final settlement by the clerk of court was on May 2, 1857. As Moriah's children were bound out to different family members and neighbors in the 1850 census, and she is no where listed, it is most likely the case that she was deceased prior to 1850.  Moriah's is an unusual case, and some of the first entries into the court records of the newly established county of Stanly in 1841, is of her son Albert being bound out to farmer John Norwood to learn the art of farming. 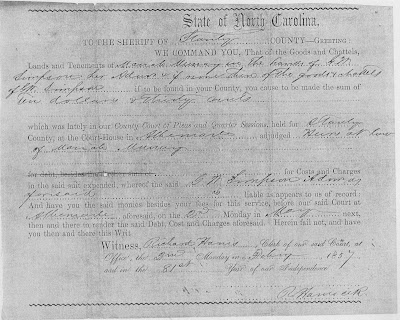 Moriah was the mother of  four sons and 3 daughters: Ben, Mary Jane, Albert, Eliza, Lydia Adeline, Wesley and William. Wesley and William may have been twins as they are both shown as 6 years old in 1850 and twins ran in the Murray family.

Ben, named for his uncle, Moriah's brother Benjamin Murray and also an older ancestor, I believe was the oldest. While he is mentioned in pre-1850 records and in the estate papers, he is not listed in the census of Stanly County, and may have relocated prior to then. Several of the Murrays left for Arkansas at various times and young Ben Murray may have been one of them. I have yet to track him down with any certainty, although I have found records of Ben Murrays who may be him. The remarkable thing about Mariah Murray's children is that they are all listed as mulatto's in the court records and also in the 1850 and 1860 census records. Moriah Murray had chosen to co-habitate with an African-American man in the years prior to the Civil War and had 7 children. Her son Albert Murray, who married a daughter of Mariah's sister Sophia Murray Whitaker, named his father on his marriage license. Henry Wilkerson. 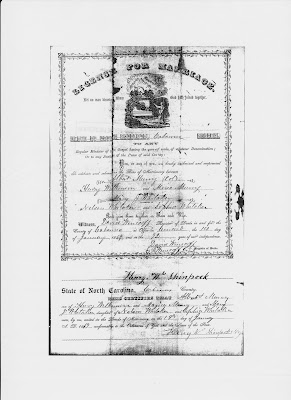 All of  Jesse Murray's other daughters would marry or have children with Caucasian men, with the exception of Priscilla, who would have one mixed race daugther in 1867, after her husband died. Moriah, albeit tri-racial, was certainly excepted as primary as white as her siblings were. To have this relationship and these children during the late 1830's and 1840's was out of the ordinary and extremely looked down upon. As tension in the area mounted and the sparks of war in the air, I wonder the fate of Mariah Murray.

Green Wesley Simpson, the administrator of her will, was a teacher and church leader in her community, and the brother-in-law of her sister Priscilla "Prussia" Murray.

I am still researching the fates of  Moriah's children. Mary Jane married a Manuel and moved to Robeson County where the racially ambiguous Lumbee tribe are centered. Wesley Murray remained in the home of his Uncle, Ben Murray and relocated with him to Arkansas. Wesley died at age 20 of "worms" in Arkansas.
I have not discovered the fate of Ben, Eliza or William Murray, although there are faint records of a Will Murray in Cabarrus County and in Union County that could be him or his older cousin William R. Murray, son of Jane Murray, Jesse's oldest daughter and namesake of his mother.

Albert married his first cousin Mary Jane Whitaker in Cabarrus County and lived next door to her parents for awhile, where they are listed as black while her parents are listed as white. The family later locates to Chesterfield, SC and then to Florence, SC, where they are listed as white. Albert was born a mulatto child, but died a white man. His sister Lydia Adeline also moved to Cabarrus County after having 2 or 3 children by Pinkney Carpenter, a caucasian farmer. She later married a black man, Allan Faggart. Her children also married African-Americans. Her son John lived close to Mount Pleasant, North Carolina and married twice. Her daughter Jenny married a Mr. Thomas Kirk and lived near Concord in the Cold Water Community.

I have not yet located any living descendants of Albert or Lydia Adeline, though it might still be possible. I wonder about the life of Mariah Murray and more about who Henry Wilkerson was. I believe Mariah's children may have been taken from her and bound out while she was still living, as they often did with illegitimate children.

Stanly was Montgomery County until 1841 and the courthouses of Montgomery County loved to burn, and with them went a treasure trove of records. These records may have given me much more information on the Murray family, court records on Mariah's children. There may have been information on her demise. Her youngest, Wesley, was only 5 when she died, so she was not an old woman. Did she come down with a disease? Did any younger children die with her? Was her death suspicious? Even Green Wesley Simpson, in his journals and records did not let us know.

Goodbye Mariah, your secrets have gone to the grave with you.
Posted by Jobs Children at 2:27 AM