Don't you sometimes wish your ancestors used a little more imagination in the naming of their children?

When a family has expanded to include more than one household, or when some members have migrated and you are trying to find out where, it is impossible to verify if the ancestors name was John,James or William or some other overused moniker. Being thankful for the Archaelus, Zebedee,  Phillipi or Armistead, it still can cause a great deal of confusion when Drury has spawned 10 grandsons who have all named a son Drury.

The following are the final wills and testaments of John, John and James, 3 three men whose families were entangled with mine or whose a member of my family is mentioned or witnessed. 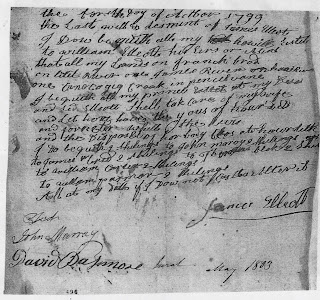 This is the May 1803 Will of James Elliott of Orange County, North Carolina that was written in 1799, and proved 4 years later.

The 4th day of October 1799. The last will and Testament of James Elliett I do bequeath all my housell estate to William Elliott his Heirs or assigns All my Lands on franchbord on the little river on James River on Haw River on Cane Creek in Pensylvania. I bequeath all my personal estate at my Death and said Elliottt shall take care of my wife & let her have the use of her bed forever after while she lives - And the disposal of her body chose at her death - I do bequeath 2/ to John Murray 2/ to William Carter 2/ to James Hird 2/ to Thomas Blake 2/ to William Passmore all at my death if I do not chose to alter it -
James Elliot
Test John Murray
David Passmore } Jurat
Orange County May Term 1803
The Execution of the foregoing last Will and Testament of Jame Elliott dec'd was duly proved in open court by the oath of David Passmore a subscribing witness thereto and ordered to be recorded.

My ancestor John Murray was one of the son-in-laws of James Elliott. 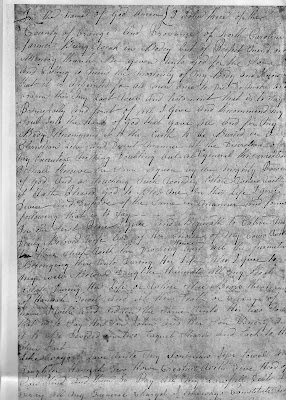 WILL OF JOHN RICE – 19 JANUARY 1783 ORANGE COUNTY NCIn the name of God, Amen – I John Rice of the County or Orange and Provinceof North Carolina, farmer, being weak in body but of perfect mind and memorythanks be given unto God for the same and calling to mind the mortality ofmy body and knowing that it is appointed for all men once to die do make andordain this my last will and testament. That is to say principally and firstof all I give and recommend my Soul unto the hands of God that gave all andfor my body I recommend it to the earth to be buried in the Christian likeand decent manner at the discretion of my executors nothing doubting but atye general resurrection I shall receive the same again by the mighty powerof God. And as touching such worldly estate where with it hath pleased Godto bless me in this life I give devise and dispose of the same in manner andform following that is tosay -------------------------------------------------------------In the first place I give and bequeath to Cathrine, my dearly beloved wife,two of her choice of any cows with three sheep with the dwelling house andall the furniture belonging there unto during her life. Also I give to mywell beloved daughter, Hannah, all my real estate during her life, or whileshe bears the name of Hannah Towel. And at her death or change of name, Iwill and ordain the same unto her two sons, that is to say, her son John andher son Henery and it to be divided into two equal shares and each to havetheir part.Likewise, I leave unto my son-in-law, Jesse Towel, and daughter, Hannah, twohorse creatures and five head of cow kind —and them to pay all my lawfulldebts and to pay all my funeral charges. I likeways constitute, order andordain my son-in-law, Jesse Towel and my nephew, —John Murry my whole and soleexecutors of this my last will and testament of all my real and personalestate and do hereby utterly disallow, revoke and disanul all and everyother former testaments, wills and legacies, requests and executors by me inany ways before this time named, willed and bequeathed ratifying andconfirming this and no other to be my last will and testament whereof I havehereunto set my hand & seal. This nineteenth day of January and year of ourLord one thousand, seven hundred and eighty three.John (his X mark) Rice (seal)
Signed, Sealed and Delivered in the Countence ofJames ThompsonJohn Murdock
Prudence Murdock


Orange County  November Court 1783
This execution of the written will  of John Rice Decd. was duly proved in the open court by the Oaths of James Thompson and Prudence Murdock, Subscribers being Witness thereto and ordered to be recorded.
List Js Johnston C. C. 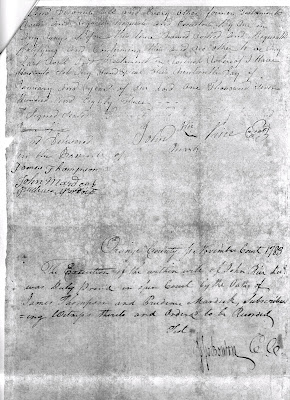 
And last but not least: John Emmanuel, Stanly County estates. The Emmanuels were relatives of Jesse Murray's second wife, Elizabeth. 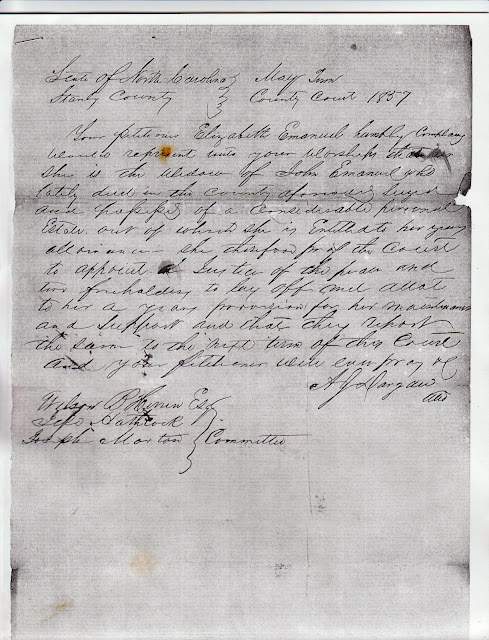 Your petitioner  Elizabeth Emmanuel humbly complains ? unto your worship ? She is the widow of John Emmanuel who lately died in the county aforesaid and possesses of a considerable personal estate out of which she is entitled to her years allowance she therefore asks of the court to appoint and lay off