The Howell's: A New Journey 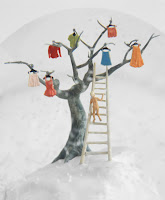 Sometimes, when you are trying to pull apart the tangled threads of one family line, and have exhausted your resources and energy to a point that you are unsure what step to take next, it is time to step aside and lay that brick down and pick up another.

While I have not solved all of the confusion in the Murray family tree, I have made great head way. There are some members of that family who appear to have left documents, but otherwise just escaped detection, and it may take hours on microfilm to find anything else.

How can you find an individual in a census as a child, find where someone has been paid in court to house them as a criminal or bring them in from a neighboring county for trial, but never actually find the case itself, then find them listed on the marriage license of a child, with a wife, but not anything on the marriage of this person or their wife, and not find them past 6 years old on a census, and find the grave of their wife, but never them. Good job hiding in plain site William Murray.

But this post is supposed to start a journal of my search for the Howell's.

The Howells were the family of Job's stepchildren. Sarah Winfield's first husband was Richard Howell. It is appearing as if Richard Howell was the son of Jordan Howell the first. I have documents from this family and will be ordering more and posting things as I find them. Richard and Sarah appear to have had 3 sons in a rapid succession: Peter, named for his grandfather Peter Winfield, John W and Jordan (named for the older Jordan Howell who appears in records, if indeed Richards father.
The 1800 census records show one adult male 26 thru 44, one female 16 thru 25 and three little boys under 10. Sarah was born in 1773 and should have been about 27.

Richard died in 1802 and left a will. By 1810 Sarah had married Job Davis and her daughter Charlotte, who was born after the 1800 census, but before 1802, shows up along with John W and Jordan being the boys between 6 and 10, Peter being between 10 and 15 and her first two Davis sons, Henry and James, being the under 5's.

Some of the Howell relatives appear to have lived around the Fayetteville, Cumberland area. This first census shows the young family in the Fayetteville area, but after Richards death, Sarah must have come back to the Forks area, of the Rocky and PeeDee rivers, as her fathers land appears to have been both on the Anson and Stanly sides, which was Montgomery pre-1841, and Winfield Ford, as shown on old maps, became Davis Ford and the Davis plantation was on the Stanly side of the river. Peter Howell would later buy out his siblings share of their father's inheritance in Anson county. Jordan and John W Howell would reside in Cumberland and Charlotte would marry a minister, Levi Stancill and relocate to Newton County, Georgia.

This weeks posts will be in discovering the origins and trails of this branch of the family, Job's stepchildren, their extended family, and if they are linked to Ann Howell who shows up as Peter's neighbor between 1860 and 1880. 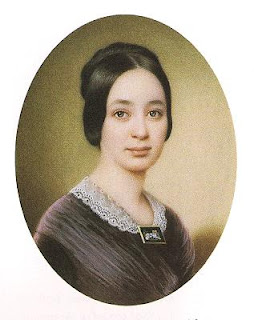 This is Varina Howell Davis. She was the young wife of Jefferson Davis, President of the Confederacy. As some of the Davis's had taken the route from Virginia through Kentucky on to the Mississippi River while others came south, some of the Howell's in early Anson had either traveled south into Georgia or west to Mississippi. Varina Howell came from this branch. This portrait must have been painted of her at a very tender age. Her large eyes and consigned look tell of her lack of choice in matters. She was very pretty for the times and would obviously had had movie star looks if born this day and time with modern hairstyle and makeup.

The HOWELL journey begins.
Posted by Jobs Children at 3:08 AM