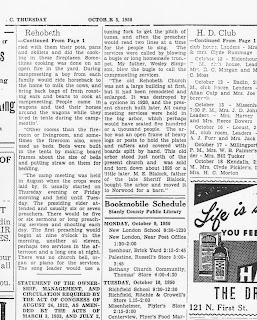 Rehobeth is an abandoned church with a sizable cemetary located near the communities of Aquadale and Cottonville in Southern Stanly County, North Carolina. Locales refer to this area as UCLA:        Upper Cottonville, Lower Aquadale.

Most of the folks who attended there and are buried there are relatives of mine, if not directly, they married into the families at some point, fought with them, lived next to them and were overall a part of their lives. My great-great grandparents, H. H.Davis and Julina Aldridge Davis are buried there, with a large number of the Aldridge Clan. Aldridge Patriarch, Caleb Aldridge is buried there, along with both of his wives.

Rehobeth observed the practice of Camp Meetings in which families would build tents or cabins surrounding the church and camp out for weeks at a time while having revival meetings. There is one such camp located not too many miles from Stanly, down around Mineral Springs in Union County below Monroe still in existance, Pleasant Grove Camp Ground. 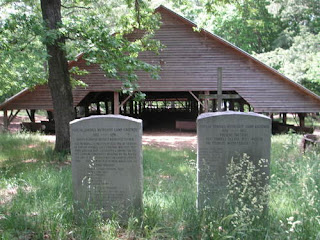 
Rehobeth seems to be the one of the five oldest churchs in Stanly County. Randalls Church, not too far away on the PeeDee River near Norwood, NC claims to be the oldest. Kendall's church in the Kendall Valley Community north of Albemarle, and Ebenezer Baptist, now Badin Baptist, in the town of Badin, along with Pleasant Grove  in Western Stanly , and Saint Martin's Lutheran are among the others.

Green Wesley Simpson was a member and a teacher at the church who kept journals and records of the times. Also, the deeds give us a bit of information. A spring is refered to, and a brickyard on the east side of Winfield road. Winfield Road was named for my family, the father and brother of Sarah Winfield Davis. Much of the Davis plantation was originally Winfield property. The road came from Concord in Cabarrus county, passed Saint Martin Church in West Stanly, passed Rehobeth, went through Cottonville and the Davis lands, down through Anson to Wadesboro and on to Cheraw. Cheraw in the early days was a trading center for those living up and down the PeeDee River. Parishoners and circuit preachers traveled by horse and buggy, if not by boat. One report is that they came "with their tar buckets hanging on the coupling poles under the wagons." Rehobeth is perhaps the only church in Stanly County that held camp meetings. The last one recorded was in 1885. The old Harbor stood north of the church with the pulpit elevated on a stage in the middle of the room. The Harbor was later purchased by M. E. Blalock in 1896 and moved to Norwood to use as a barn. Before the church bought a bell, G. W. Simpson would blow a bugle to announce service. The bugle survives as a Simpson family heirloom. The 1920 tornado took all but the floor and a bible. An old school building from Aquadale was bought to replace it.

Tent Holders at Camp Meeting:
circa 1880 and prior