The Kron and Delamothe Families 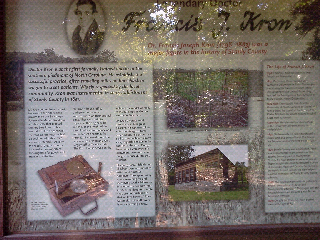 The Kron and Delamothe Families of Stanly and Montgomery Counties, North Carolina.

On August 19, 2012, I attended a program at Morrow Mountain State Park on Dr Frances Kron. Dr. Kron was a very influential person in the early years of our area and his homesite is a restored property within the confines of the State Park. Dr. Kron was born in Prussia and later moved to France. It is said he was the first formally educated doctor in the area. He married a Parisian girl, Mary Catherine Delamothe. Her uncle, Henry Delamothe, was one of the earliest settlers on the Montgomery County side of the river, and he came over during the North Carolina Gold Rush in search of treasure. He persuaded the Krons to come to America, by promising to make Mary Catherine and her family his heirs, as he had none at the time. 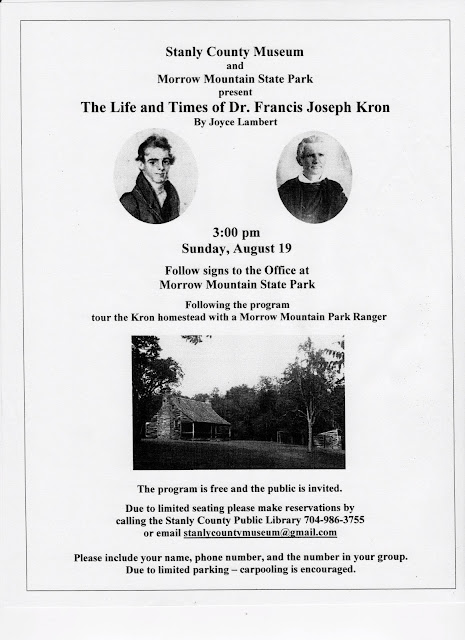 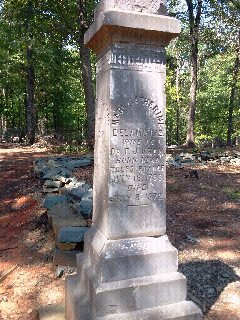 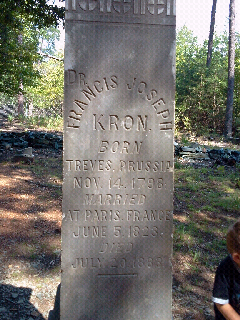 Dr Kron left an extensive paper trail, including ledgers, journals, botanical drawings, scientific studies, family history, and genealogical information on the Kron slaves. Kron was a horticulturalist, a physician and a botanist.
He originally bought his log cabin and property from an early Scotch settler in the area,Rev.  Willliam McGregor. While pursuing his medical practice, Kron also became involved in local politics and helped petition for the division of Stanly from Montgomery County in 1841, due to the danger in crossing the Yadkin River to get to the Courthouse. The Kron property was located near the  small community of Tindallsville, which once served as the County Seat of Montgomery County, until a typhoid outbreak caused most of the townspeople who survived to relocate. Other Courthouses and County Seats were located on the East side of the PeeDee River. It was also located near Lowder's Ferry and Inn, along the Salisbury to Fayetteville Road. This ferry was located on the river, where the Uwharrie runs into the Yadkin to form the PeeDee.  According to the presentation on Sunday, Dr. Kron was a member of the First Court of Common Pleas, was one of 9 men appointed as a Superintendant of Common Schools, directed to set up an education system in the county and was on the Commision to build the new Stanly County Courthouse. 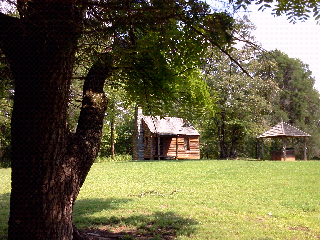 He referred to his home as Attaway Hill. He and his wife Mary Catherine had two daughters, Elizabeth and Adeline. The girls never married as Dr. Kron did not feel that the Americans were good enough for his daughters. They were educated by their parents and attended St. Mary's Episcopal school for Girls in Raleigh, North Carolina. Although the Krons do not have any descendants, their materials and journals were important for the records they kept on local families and the contributions they made to the community.

Dr. Kron prided himself on the many varieties of trees, flowers and vegetable he grew. He had an orchard, a vineyard and a greenhouse. He cultivated 13 varieties of grapes prior to 1859 and in 1859 he ordered 107 varieties from the Luxemborg Gardens. He experimented with grafting and some trees from his experiments exist, or descendants from the original trees.

There were Krons existing in the early records who have descendants. These are descendants from the slaves of Dr. Kron and his family. They were very close knit and the descendants of the Kron slaves remained with the daughters until their deaths. Adeline, the last of the Krons, attempted to leave her estate to Saul Kron, a son of George and Julia, who had worked for her father. However, she was so in debt to the Morrow Brothers and Heath company in Albemarle, that they confiscated her estate instead and her will was  disavowed. 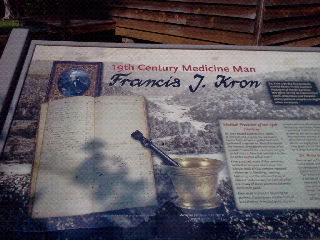 Henry Delamothe was the cantankerous uncle of Mrs Kron, Mary Catherine Delamothe Kron. His relationship with the Krons was tenuous at best. Although he had drawn his neice and her husband over with promises of a legacy and prosperity, late in life, he made the decision to create his own heirs. He married the daughter of a local farmer at the age of 70, his bride Bethany Bailey was only 18. 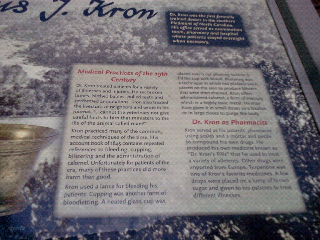 Two daughters would be born during the marriage of Henry Delamothe and Bethany Bailey, Nancy and Elizabeth. It was said that old Henry had brought a 'stranger' into the fold in order to orchestrate an heir. Nancy Delamothe arrived according to plan. Elizabeth, later known as Lizzie, appeared to be quite a surprise. It is said that Dr. Kron thought this was very amusing, and went around the community laughing and making light of it. Statements made in Henry Delamothe's will verify these rumours and remarks. On December 1, 1835, Frances Augustus Delamothe arrived, per Henry's bidding. Augustus was the younger brother of Henry and refered to as 'The Nice Uncle'. Frances Kron recorded this arrival shortly after the following entry in his diary. "In the evening I went to Lawrenceville. According to reports Mrs. Delamothe was delivered of a stranger on Friday 28th November, a little girl made to inherit the old cuckhold's property. Will that nefarious scheme be crowned with success? " Henry died in 1838 after making his will. The will bears the date September 10, 1838, so he passed in the fall. The will was probated on January 9, 1839 in Lawrenceville, Montgomery County. Among the pronouncements within were these stipulations: "To wife Beneathy (Bethany) Delamothe one third of the estate and personal property and a tract of land. For her years provisions 125 bushels of corn, 10 bushels of wheat, 25 lb weight of coffee, 50 lb of sugar, 500 weight of pork and $50 cash." For the legacy of his children "I give my daughters Nancy and Elizabeth (so called) 50 cents each and no more. The reason for it can be easily guessed at. And should my wife Beneathy get any more children before my death or after my decrease whom the law would entitle to be heirs of mine I give each of them the same sum of 50 cents and no more. To my brother Augustus, was given some small specific legacies, the sum of $1000 and an annuity of $150 per annum during the remainder of his life. To Mary Catherine Kron - legacy of $1000 and an annuity of $100 for the remainder of her life." Each Kron daughter recieved $1000 when she attained the age of 21 from their cantankerous, convivng great-uncle Henry. The remainder of the estate was held in trust by the executer for the benefit of his sister Quenet's children and grandchildren," by the name of Forestier, who might apply for the same within two years, it being obligatory upon them to pay $100 annually to their grandmother during her lifetime and following her death, to their mother." Henry's memory of this family was hazy, and indeed, he may never have met his sisters grandchildren. It seems a little course that Henry would provide so well for his wife, considering, but so little for her two daughters bearing his name, after all, they were innocents and the fruit of his own plotting. Rather rapidly after Henry's death, the young Widow Delamothe married Willis Morgan from Montgomery County, but not before drawing up a prenuptual agreement. Nancy Delamothe would die young, but Lizzie would be known as 'Morgan' from thence on, suggesting Willis Morgan was the hired surrogate to produce a Delamothe heir. The Morgans would leave this state and relocate South to Alabama. Lizzie, after marriage, would relocate to Texas. Bethany and Willis would bring several more children into the world too. 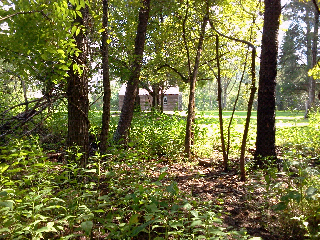 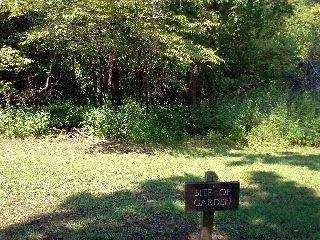 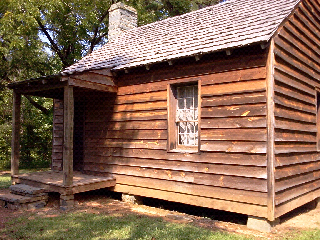 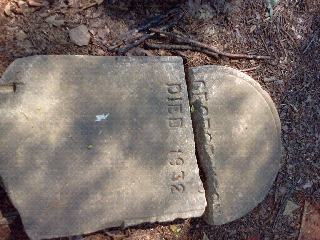 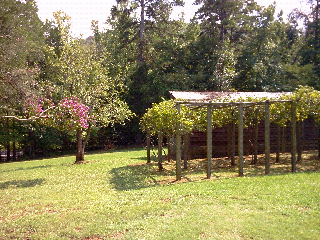 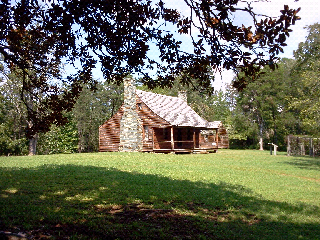 Six grandchildren of Quenet named Forestier applied for the inheritance within the prescribed time. There would be several lawsuits dealing with Henry's massive plantation. The courts finally ruled that neither Augustus, the Forestiers or Mary Catherine Kron could inherit the property, due to not being American citizens. Mary Catherine had applied for citizenship, but not yet recieved it. In December, 1841, the Kron daughters, both natural born citizens, came into the possession of 6090 acres of land lying across the PeeDee river from their home. Elizabeth, called Lizzie Kron, was the oldest and blonde, while Adelaide or Adele was called Addie Kron and was a brunette. Both girls were well educated and artistic. They even grew silkworms on the Mulberry trees. The girls were said to have kind hearts and in 1858, they bought George Kron's wife Delia and four children, who lived on a neighboring farm so the children could be together. In 1910, with the passing of Addie, the Kron family was no more, but they left a mark. The county of Stanly and local individuals funded the restoration of the Kron house and other structures to preserve the memory and contributions of Dr. Frances Kron. The cabin was originally built by Rev. McGregor, a Scotchman who preached in the Baptist church in Tindallsville known as the Mouth of The Uwharrie Baptist Church. A marker to him is located in the woods past the cemetary. Descendants of George Kron and Israel Delamothe still carry on the legacy of the Kron an Delamothe names. These men were of African and European ancestry of what origin we do not know, and were born into slavery, but remained near the family for the rest of their lives. Thanks to the care of the State Park system, Dr. Krons knowledge and contributions to Stanly County will be known to generations to come.
Posted by Jobs Children at 2:56 AM