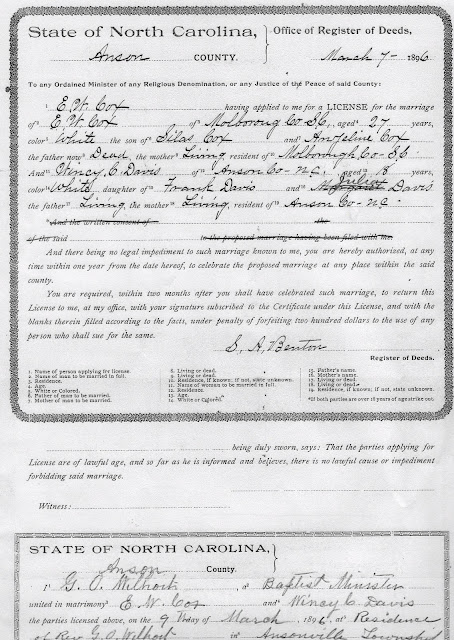 Ye
As the last residence recorded for Wincy Catherine 'Kitty' Davis on her death certificate, before her admitance to Broughton Hospital for the Insane, her residence had been Polkton, in Anson County, North Carolina; so I went to search for her marriage license in Wadesboro, at the R.O.D. office for Anson. I found it. Funny how the solving of one mystery opens the door to another, or several. The marriage license states that Kitty married an E.W. Cox, age 27, son of Silas and Angeline Cox of Marlboro County, SC on March 9, 1896. Just weeks before the mysterious death of her cousin Hortense, who had accused Kitty of running off with her husband Bill Stewart to Chester , SC in her divorce papers just one year prior, 1895. So, that should solve the mystery of who the mysterious Mr. Cox was that Kitty married prior to being commited to Broughton. However... I searched Ancestry.com for EW Cox born around 1869 in Marlboro County. Nothing. Plenty of Coxes. No EW's. Tried looking for Silas and Angeline. There they were in plenty of records, family trees, censuses, city directories, marriage bonds. Silas was born in 1807 and Charlotte Angeline Ivey Cox in 1810. The problem is, not only did they not have a son with the initials E.W, they were too old to have had a son in 1869. Angeline would've been 59 and Silas 62. I don't think that happened.

The one thing Silas did have was a son named W. E. , or William Edward Cox. And I know from experience that quite often, two first names could be come entirely interchangable. Take my ancestor Henry Garner Aldridge, for instance. I've seen his name just as often as Garner Henry Aldridge.

The problem with this theory is that first, the age is all wrong. W. E. Cox was born in April of 1843. In March of 1896, he would be a month shy of his 53rd birthday. I don't think a 53 year old man could pass for 27. Second, he had married Miss Lucy Ann Skipper in 1870. Lucy shows up with him in the Bennettsville Census in 1880, then again in the PeeDee Villiage in Rockingham County in 1900, and then again in the 1910 census with him in Darlington, South Carolina. They did move around a bit and in 1900, they were very close to where Kitty's last known residence, Polkton, Anson County, was before she was committed.

Now, W. E. Cox did have a son named Edward, born in around 1870. Age right, first intial right, and Edward was single in 1896. However, his middle initial was L for Lee, and Silas and Angeline were his grandparents, not his parents. Then, in 1897, the next year, Edward Lee Cox married Josephine Quick. In the 1900 census, Edward and Josephine are living right next to his parents in Richmond County. He died there at the age of 76 on July 22, 1947, in the community of Cordoba, where he was a Tax Lister and Payroll guard at a Cotton Mill.

Did Edward discover something horrific about Kitty and quickly divide himself of her presence, and marry Miss Quick quickly? Or did he file for an annulment or a quick divorce? I will have to check the divorce documents of Anson County for that time period to find out. In the meantime, Kitty's life has become more of a mystery than ever. 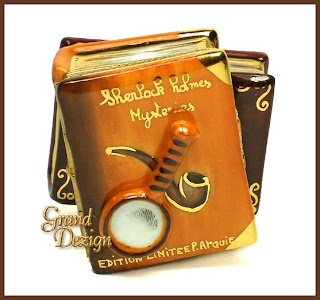 Posted by Jobs Children at 7:51 AM