All in the family: The Story of William Deaton and Nancy McQueen

1867 was a very busy year for the McQueen and Deaton families of Northeastern Montgomery County, North Carolina. I had been exploring Bastardy Bonds of the era, looking for one in particular and found out a great deal more about dealing with people I had came across in my research.

I wrote down a list of Bastardy Bonds that I had came across while searching, whose surnames connected to those I was researching.


I also found one in 1867 for Terry's sister. Margaret Smith McQueen, whose husband, Calvin McQueen had been killed in the Civil War in July of 1862, but who had given birth to a son, Larkin, on June 4, 1867. 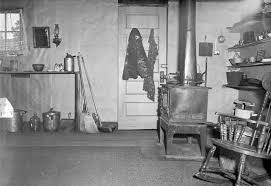 In the case of Margaret Smith McQueen, she refused to name the father, but a D. D. Deaton had came to her defense and paid her bond and court fees. Most of the time the man who paid these bonds, if not a relative of the woman or girl (as some of these were really young), getting her out of jail, were the actual fathers of the infants.  Kindly neighbor?, maybe. Married man? Usually. And I blogged on Maggie here:

The Ballad of Maggie McQueen

But there was a third bond involving a McQueen and none other that William Deaton, that very same year. I wonder if I will find more bonds against William Deaton if I keep digging through the whole 2000 pages?

And this was the case of 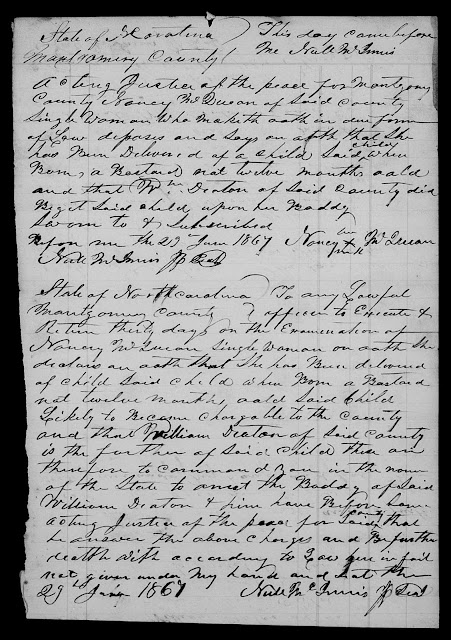 Nancy McQueen, I would discover, was born Nancy Britt, daughter of  William Britt (1793-1864) and his wife Catherine Deaton Britt (1784-1880). Yes, children, it appears we are still keeping it all in the family here.

It seems one Joseph Deaton, born in 1755 in Deatonville, Amelia County, Virginia who migrated to Montgomery County, North Carolina in its very early years, and married Elizabeth Jordan, daughter of Francis Jordan, was the founder of the Deaton Dynasty of Little River. It is said about Joseph, who was the son of Thomas Deaton Jr of Amelia County, that he settled down at the forks of the Little River, just a few miles east of the modern town of Troy. Francis Jordan was already here, supposedly, so Joseph married his daughter around 1873 or so.

It is said that Joseph Deaton helped found Star Baptist Church and that Dison founded Laurel Hill Church. I'll let you make your own decision about William.

The fact was that Nancy Britt McQueen was the niece of William Deaton.


James Batten McQueen died March 11, 1855, at the age of 28. According to a family legend, he ostensibly died from the result of a tragic accident. James B. McQueen is buried at Laurel Hill Church.


Sarah Jane McQueen was born posthumously to James Batten McQueen's death. Her marriage was also a cousin marriage as John Christina Deaton was the son of Francis Jordan Deaton and Rachel Holderness Deaton, making him her mother's 1st cousin and her 1st cousin once removed.

The 1850 census showed a happy young family unit unaware that tragedy would strike in 5 years.


What did Nancy do after her husbands' death? Young and pregnant with 3 small daughters, she must have been in an awful state. It was the mid-1800's, what power did women have? Her husband died intestate, he was so young, how could he have known his days were numbered.

It must be noted that neighbors were Valentine Moore, James Poe, Batten's father Alexander McQueen and Wiliam Bruton and Thomas Shaw.

In 1860, Nancy heads her own household as a widow. Notably, she is living next door to her parents, William and Catherine Britt and her 3 single sisters, Talitha, Fanny and Carthena. Her brother, Merriman Britt is on the other side of her. Nancy has moved home to her father's property.


Discernibly missing from the 1860 census was Nancy and Batten's oldest daughter, Elizabeth. Oddly perhaps, she was living with the family of Wilson Wright Williams and his common law wife, Diza or Dicey Maners McQueen Williams. Now, Wilson Williams is a perplexing person himself. He had a connection to Edward Wright and is mentioned in his will. He is seen by both of the surnames Wright and Williams. Diza is the woman mentioned earlies as being the first wife of Calvin McQueen, or perhaps they never married, but they did have a daughter, Mary Ann. Calvin did later marry Margaret Smith, they have records and he did die in the Civil War.

The other McQueen in the household, 17 year old Margeret, was the sister of Calvin McQueen. A little confusing, perhaps? Yes, more than a little. To add another twist to the conumdrum, Wilson Wright Williams was not a white man, and is listed as Mulatto while Diza and the McQueen girls were white.


So that's where the McQueen family was before the Civil War and before Nancy McQueen and William Deaton were dragged into court. 1870 told a different story.

Nancy McQueen was now 43 years old and living with Sarah Jane, the youngest child of she and Batten and now she has a younger child, Flora.

Flora A. W. F. McQueen was actually born in 1867, acoording to later records, and was the daughter born to Nancy Britt McQueen and William Deaton, the subjects of the 1867 Bastardy Bond. Some family trees have her listed, nearly laughably, as the daughter of James Batten McQueen, who died 12 years prior to her birth. Now that would have been a long pregnancy.

As for Nancy's older daughters:

Elizabeth had married Archibald Leach and was living near the town of Troy in Montgomery County, still.


Mary McQueen was living with her grandmother, Catherine Deaton Britt. Her name was written in as "McQueen Mary". Her maiden Aunts, Valetta and Catherine II, was still in the home and the Greens were another transcription error, as they were an entirely different household and not living with the Britts.

Nancy Evangeline McQueen is missing from the 1870 census. She would have been about 15 or 16 and possibly living with other family members and misnomered.


However on Janeuary 14, 1877, she would marry Henry Maners or Maness ( the spellings were excruciatingly interchangeable).  They would first live near Troy, then move to Sheffields in Moore County for a few decades, before finally settiling down in Randolph County, where Henry would die. 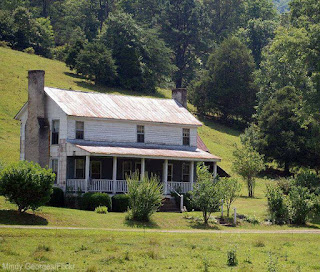 But what about William Deaton, the other person mentioned in the Bond?


He had been a married man, having married his first wife, Nancy Allen in 1823. Together, he and Nancy had 10 children:


His son-in-law, Aaron Brewer was bondsman. So, I wonder what happened between 1862 and 1867 for William Deaton to show up in court on two different bastardy bonds? One with his niece and one with his granddaughter.

In 1870, William Deaton seems happily settled and still living his second wife, Elizabeth, but we know better, don't we? Elizabeth had been born Elizabeth Allen, and I believe may have been his sister-in-law. She was the widow of a Joseph or Josiah Lassiter, and had been living in Richmond County before moving to Montgomery. Her husband died about 1856, so she's living in Diffies as a widow and farmer in 1860.

In 1870, she is living with William and her youngest daughter, who is shown as Jervey Deaton, but is really Virginia or "Jenny" Lassiter. Right next door is William Deaton's daughter, Jemima Deaton Smith and Jenny Lassiter ends up marrying Mima's son William Smith. I'm not sure who the 12 year old boy Owen or Oscar, is yet. Possibly one of her grandchildren.


The last census they both show up in is the  1880, and they have one of her grandsons, John Lassiter, living with them. In the same household, but not connected here, but shown as in the same household on the actual census, is Wilson Williams, as a hireling, who was mentioned earlier. The whole neighborhood surrounding them are family or people I've been blogging on lately. Near them is Williams grandson, William Smith and Elizabeth's daughter, Virginia and their family. Not far is her son Joseph Lassiter Jr, married to Williams granddaughter, Sydney and her mother Mary living with them. Next to them is Mary's daughter, Franie Jane and her husband Edmund Denson. There's Levi Deaton and a variety of Hogans and Freeman and Manuses, all intermarried with the Deatons and among themselves. It's a tribe.


1880 is also the last census for Nancy McQueen. She's 53 with a houseful of children. Living with her are her daughter, Mary Catherine and the 4 youngest children are Mary Catherine's.

F. A. W. F. McQueen is Flora and her many middle names unknown. She's 14 here. So what happened to Flora, the child of William Deaton and his niece, Nancy Britt McQueen? Her life wa short, but not without love.

Flora married at 19 to Frank Green, son of Anderson and Talitha Green.


Together, they had two children:

Frank then married Margaret Leach and they had one child:

It is unknown where either he or Flora are buried.

As for Will Deaton, he supposedly lived until 1891 and is buried somewhere near Laurel Hill Church, if not in it.

Times were different. A man of his ilk today would be locked away. Not so with Will Deaton. He lived in a time and a place where it is said that poor families would send children packing during the winter to find someone to live with as their parents couldn't feed them. Children could be seen walking down the road with little bags of clothes.

And they call those the good old days...

Posted by Jobs Children at 1:59 PM