A Tale of Two Alexanders

The Scottish immigrants into the Sandhills of Montogomery, Moore, Richmond and Scotland Counties in North Carolina were very fond of the name "Alexander". I am not certain if this was because they had a certain affinity for Alexander the Great, or for some other reason. What I do know is that both  Malcolm McQueen and his brother Alexander Marcus "Sandy" McQueen, sons of Alexander Murdoch McQueen, both had sons named "Alexander M. McQueen", obviously in honor of their father. These identically named cousins of relatively the same age, make it a little difficult to decipher who was who in the old records. The following is my theory of which Alexander was which.

In 1840, there were only 3 McQueen households, that of 3 siblings, Malcolm, Alexander and their unmarried sister, Elizabeth. So we know that the younger ones to come fit under two roofs, Malcolms family or Alexanders family. Alexander's family (nickname 'Sandy'), was intact. He also left solid records and a family bible, so we know who his children were. Malcolms had been sparsed out to family by 1850.

There were other siblings about of Malcolm and Sandy, other children of Murdoch and Mary Nicholson McQueen. Elizabeth and Nancy never married and remained in Montgomery County. Hugh camped in Chatham and later went west to Texas. Anne married a Street and lived in neighboring Moore County. Daniel spent his time between Robeson and Marlboro County. John settled in Richmond County. 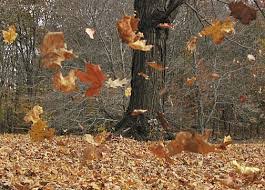 Below is the family of Sandy McQueen in 1850. His son Alexander Jr is 15 years old, born in 1835. His older 3 children,  Herbert, Betsy and John Batten McQueen have already struck out on their own.


Alexander (Malcolm) McQueen, born in 1836, is 14, just one year younger than his cousin. In 1850, he is living with Ferebee Wright, the widow of Edward Wright. Also in the home is Wilson Williams, a man who keeps creeping up in the study of these families and who has an interesting story of his own.


I'm not quite sure why the children of Malcolm McQueen were scattered among other households. I do know their mother was deceased and perhaps, their father was ill. He did not live until 1860.

Confused yet? I'm about to make it worse.


In November of 1859, just one year before the 1860 census, Alexander M. McQueen married Martha Simmons (misspelled Semmons here). The bondsman was Robert Crowder and witness, John McLennan. So, which grouping did this Alexander and Martha belong to, the 27 year old Mechanic or the 25 year old Carpenter? Oh, and by the way, they both lived in Diffies, as if that helps.


There was another wedding coming up, that of A. M. McQueen and Susan A. Parker in McDowell County, North Carolina on January 11, 1867.


But why McDowell? Above is the comparison between Montgomery and McDowell in location.

We have  35 year old Alexander McQueen, a Millwright, living in Cocke County, Tennesee, with his wife Susan, and they have a 2 year old daughter, Mary Jane.

So, he had been on his way to Tennesee.

So, what was going on back in Montgomery County, NC? You might ask yourself, did Martha J Simmons, who married an Alexander M. McQueen in 1859, die? And then he married Susan Parker?

No, she did not die, not yet, anyway. Above is Martha McQueen (those transcription errors hard at work again), 30 and her 7 year old son James. Not to far from her is another household:


That of Alexander "Sandy" McQueen Sr. Now, I really can't blame the transcriptionists too bad for this one because the census taker here for 1870 had very sloppy handwriting. 'A M Mclucia' is really 'Alexander Marcus McQueen Sr., his wife, Sarah, and their youngest son, Neil. There's a 7 year old Sarah, who turns out to be their granddaughter, living with them. 1870 is after the Civil War. Linda, age 30, and the children Mandy, Abram, Betsie and Reed, are all listed as black, the first four individuals as white.


In a minute, I will look closer at the two mentioned children, James and Sarah. For the time being, I need to look at an event that seemed to change everything, the Civil War.  So, in 1870, we have a 35 year old Alexander McQueen with his wife Sarah and little girl, Martha, 2, living in Tennesee. We have Martha Simmons McQueen living alone with her 7 year old son, James, in Montgomery County. Was one of the Alexanders killed in the Civil War?

I found an Alexander M McQueen who enlisted in the 4th Infantry a Orange Courthouse, Virginia.


This 27 year old Alexander McQueen was injured at the Battle of Seven Pines, Virginia. It is said that he Surrendered, survived the War, had been a resident of Rowan County, NC and is buried in Pulaski, Arkansas.

So, which Alexander McQueen was he?

Let's step back and take a look at the children of Martha Simmons McQueen. 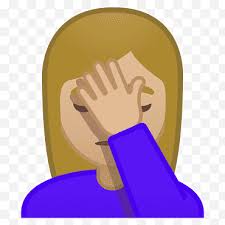 On January 9, 1876, in Montgomery County, NC, this younger Sarah Ann McQueen would marry James Stevens Lake. She was 15 and he was 22, but at least he was not a relative. James Lake was the son of John Frederick Lake and Selina Wright Lake, and an orphan. He'd lost his father in 1863 and his mother in 1865. 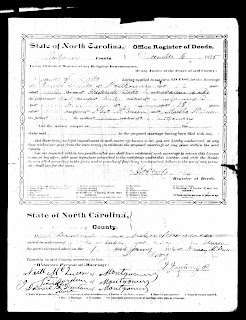 On the marriage license, James parents are listed as deceased, however, Sarah Ann's parents, Alex'r and Martha McQueen are both listed as living. The ceremony was conducted by D. Deaton, Justice of the Peace and witnesses were Neil McQueen, Daniel Deaton and a G. L. Jordan.

They wasted no time having children, and Ida Lou Lake was born on September 2, 1878 and her brother, James Alexander Lake came exactly a year later in September of 1879.

Now, where do we find this family in 1880, just a year later? Living with Alexander McQueen and his wife, Sarah, in Saline County, Arkansas. But remember, Sarah Ann was the daughter of Alexander McQueen and Martha Simmons McQueen. The Alexander McQueen who married Susan Parker in McDowell County in 1867 and made his way from there to Tennesee and then down to Arkansas is now listed as the father of Sarah Ann McQueen Lake. She, her husband and two children are living with him. But Martha is back in Montgomery County, living down the way from his father.

So, now two Alexanders have merged into one, but not really. It just appears that Malcolms son Alexander disappeared into thin air. He must have died a young man, possibly in the Civil War. When you add these two in with their cousin, Alexander Joseph McQueen of Richmond County, it gets a little murky in the Civil War records.

I began by thinking one Alexander married Martha and another married Susan, but this was not the case. Neither did Alexander become a widower before remarrying. I do not know if he bothered to get a divorce, or if he just left Martha after the war and committed bigamy. Things were a bit informal sometimes during those years, apparently. He may have just said, "Buh-bye" and didn't look back. 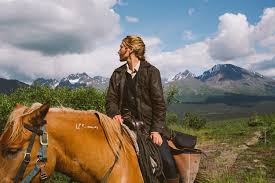 What happened between Alexander and Martha? We may never know, but there may have been one hint in the person of James R. McQueen. While Sarah went to join her father in 1880, her son was even said to be born in Tennesee, James R. stayed in North Carolina. He also left his father's name off of his documents. He may have been angry, or, he may have had another mans genes.


So, the remainder of the story unfolds for only ONE Alexander M. McQueen.

His daughter Sarah appears to have died in Arkansas before 1886. Her husband, James Lake remarried a Cynthia Perkins and has 10 more children.

Alexander spent the remainder of his life in Pulaski County, Arkansas. He and Susan had a large family of their own and Alexander farmed and ran a mill until his death in 1923. In the 1920 census, at age 87, he is still listed as a Mill Wright.

Alexander outlived all but 3 of his children. 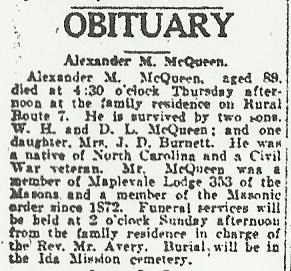 He was laid to rest in Little Rock. 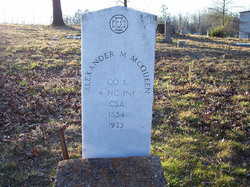 Posted by Jobs Children at 2:31 AM