The Devil and Franie Jane

Portions of the story of Franie Jane Deaton Brewer Denson have me agasp. I really don't

know what to do with them besides present them.

I asked myself, was I really reading what I was reading? Could I be reading it wrong? So some of it I will just drop here and let the reader decide what they are reading.

Franey Jane Deaton was the daughter of Mary Deaton, a single woman from Little River Township in Montgomery County. I discovered later that the area was known as "Black Ankle".


According to the book, "The Story of Black Ankle, North Carolina and People Around About", by Ruby Odom Perkins,

"The people in this part of the country were nearly all related or "close a kin' as they said. If they became angry with each other, stole from each otherr, or even killed, they wanted to settle the trouble by themselves. Seldom would one tell on the other."

"Outsiders were rocked if they started into that part of the country. Occasionally someone was found dead and the murderer would never be found. So Black Ankle's reputation grew."

Into this community in 1845 or about, was born a little girl named Franey Jane.

In the 1860 census of 'Diffies', Montgomery County, we find the Homestead of William Deaton and his wife, Nancy Allen Deaton. Also in the home is his daughter, Mary "Polly" Deaton, a single woman and her children; Jane 15, Margaret 12, Sydney 10, Betsy 8, and Rena 2, all girls and all fatherless.

The 15 year old was Franie Jane Deaton. A look at the entire page shows an area of family and connected persons. The couple of Aaron Brewer and his wife Margaret was Franie's aunt and sister of Polly Deaton, Margaret Deaton Brewer and her husband, Aaron. 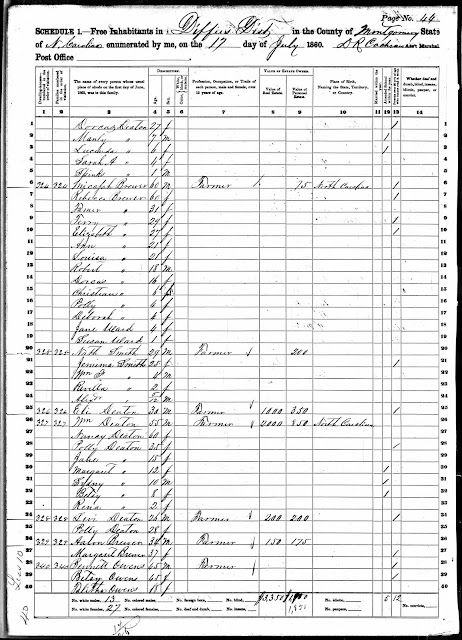 Also on this page is Dorcas Brewer, at home with her parents Micajah and wife. I've touched on her in previous posts. Shortly after this census was taken, Franie Jane moved to the home nearby of her Aunt Margaret and Uncle Aaron, or was removed. She was unofficially adopted by the couple. A jump 10 years into the future will show possibly why. 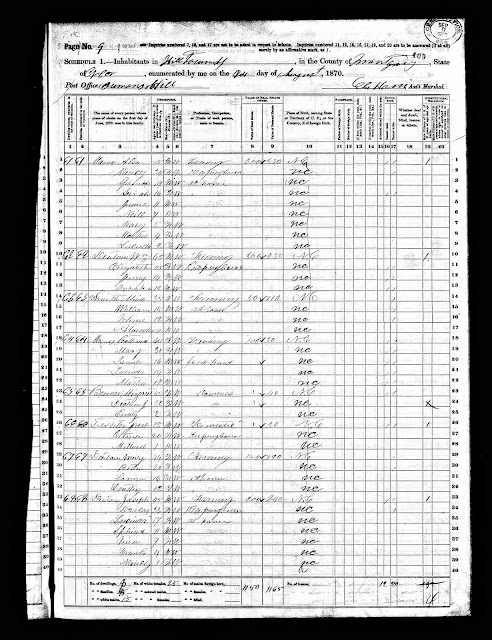 Nancy Allen Deaton has died, and in 1866, William Deaton remarried to Elizabeth Lassiter. Most of his children surround him, still. A few houses down from William Deaton's home we find his daughter, Margaret Deaton Brewer, and J Deaton, with daughter Emily. This is Franie Jane and her oldest daughter, Mary Emily Denson. As it is a little hard to read, I will list the households:

What had made Franey Jane a blacksheep of the family?

In the Winter Session of the court of Pleas and Quarters of Montgomery County, North Carolina, Eli Ward, on of the Justices of the Peace for the county declared that it had been brought to his attention that " Frany Brewer a single woman of said county is with child which child when it shall be born will a bastard and may become chargable".  He meant that Franey was unmarried and that her child could be a ward or financial disability to the county. He ordered that the sheriff bring her in on the next term of court, which he did. The following document is to follow. I'm going to just drop it here and let the reader decide for themselves what it is saying. It involves the young woman, Franey Jane Deaton/Brewer and William Deaton, her grandfather. 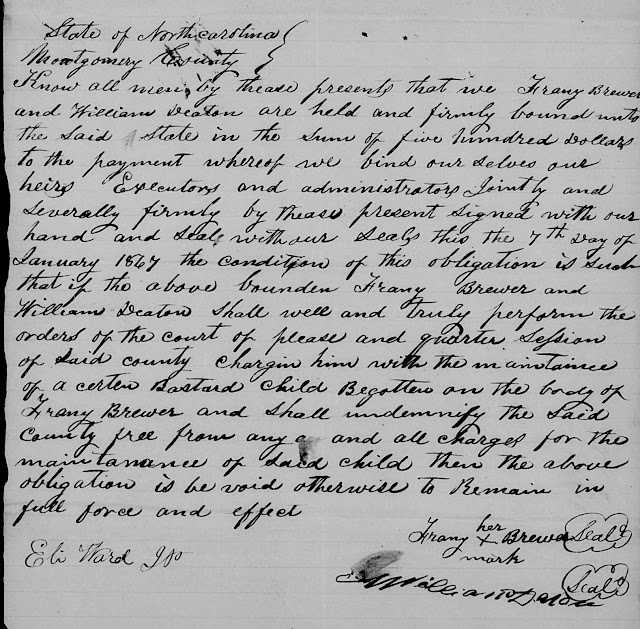 
Franie Jane Deaton/Brewer would marry in 1872 to Edmund Denson, a man himself born out of wedlock to Sarah Denson, a white woman and Thomas McLeod, a black man.

Franie Jane is seen in her early records, both census and in court as a white woman. If someone in court was not white, it was noted with a "col" for colored. If they were not white on a census, they were given a b for black of m or mu for mulatto. After her marriage to Edmund Denson, Franie is called "mulatto", as was her daughter Emily. Emily is also noted as white in 1870.

In "The Stor of Black Ankle North Carolina and People Around About." by Ruby Odom Perkins, Ms Perkins notes that:

"Several of the women were tried in court for living with negro men, but they just said  the men were working for them and usually they were found not guilty. .......the Indian men seemed to have left that part of the country and many of the Indian girls married  into white families. If the resulting children resembled white parents, they were called white and if any were  like their Indian ancestors, they were called Negros.....In court the dark men were called "clay banks" and in the census they were classified as 'other than white', and of course , to the uneducated people of this section ,all dark folks were called Negroes."