The Results are In!

I took an autosomal dna test in 2013 through ancestry.com. I uploaded that data to gedmatch.com, My Heritage, and Family Tree. I learned how to use DNA Painter. I've made many fascinating discoveries in the years since.

I've found close and - hitherforeto unbeknownst to me - relatives. I've found family mysteries, and the answers to family mysteries. I've discovered how to trace paternal lineages beyond the known by using Y-DNA testing of  direct- line male relatives for that particular surname,  with varying,  and continually evolving, results.

But one path I had not yet taken was the mtDNA test.

Simply put, mitochondrial dna, or mtDNA, is genetic information passed down from only the mother, to all of her children. Unlike a Y-DNA test, that can only be taken by biological males, an mtDNA test can be taken by anyone. It's been passed from mother to child for generation after generation. And as with YDNA, mutations occur along the way causing variances. By testing and studying those variances, scientists can visualize the human migration patterns of ancient peoples and the origins of certain groups, called haplogroups, of individuals.

I've been able to trace most of my family tree for 5 or 6 generations, and a few more prominent lines even more. Through DNA, I've discovered ancestors I never knew existed, and still not sure of where the genetic trail and the paper trail meets, or diverges. With the mother line, family names are not so important and not at all helpful, as most women in history who married, took their husbands name and passed that name to their children. Each culture is different, but that has been the pattern in the culture from which I descend.

I can trace my mother's family tree from my mother, to her mother, Maude, to her mother, Wincy, to her mother Margaret Catherine Russell, to her mother Elizabeth who married Eli Russell. I don't know Elizabeth's maiden name. I know she was born in 1811 and died in 1861. Now, some have her pegged as the daughter of an Elias Solomon Morris and his wife, Mary West.  If so, then Mary is my next mother up.  Now, that's 6 generations up from me, which is pretty good, I suppose, as some people can't get that far. But there's just some things in my genetics that I keep trying to get to the bottom of.

My genetic pie is pretty typical for who I am: an American, who is visually Caucasian, whose ancestors have been in the country for several hundred years. I mean, my most recent ancestors arrived to the state I live in prior to the Revolutionary War. I'm a pretty ancient American. And as happens in that situation, my ancestral origins are pretty diverse.

This is the pie chart of who I am genetically. This is from Eurogenes K13 test from Gedmatch. It's a program that is designed for the genetics of people who are of primarily European origins, which I can scientifically surmise by looking in a mirror.

Each autosomal test can vary a little bit, that's why it's not to worry over small differences because as their databases enlarge, and new discoveries are made, those variances can shift slightly.

From my autosomal testing, I have discovered that I am at least a third  British Isles, around 20 percent Germanic or from central Europe, with a dash of Jewish, some Portuguese, 12 percent Native American, 8 percent African (with that showing Angolan and West Indies origin) 11 percent Finnish and to a smaller degree West Asian and 3 percent East Asian. I just about have the entire globe covered.

The few lines I've been able to get back to an immigrant ancestor has led several times to Scotland, various parts of England, Wales, one to Ireland, and one to France. I know the names of my West Indies ancestors and some of my Native American ancestors. I have several Palatinian ancestors from Germany. I've recently discovered Armenian. I know the name of a Jewish merchant in Monmouth New Jersey who got himself in debt and reinvented himself in Coastal North Carolina around the Revolutionary War and ended up in my family tree. I joined a Finnish ancestry group because that 11 percent Finnish I just have not been able to nail down. So this MtDNA test is just another step in the journey.

So yesterday I got my results back.

Haplogroups mark the branches on our shared maternal tree reaching back to Africa. Haplogroup U5 is between 24,900 and 35,600 years old. Researchers believe it was born to a woman living in West Asia. Its presence in both Mesolithic gravesites in Iberia and Iron Age gravesites in the Altai Mountains indicate that it spread early across a wide area in Eurasia. Bitter cold and ice forced members of this haplogroup who traveled to Europe as hunter-gathers during the Last Glacial Maximum into refugia. When the ice began to retreat, they were among the earliest settlers. The most common of these lineages in modern populations are U5a1, U5a2, U5b1, U5b2 and U5b3.</p> The origin of the U5a1 lineage dates to between 14,100 and 19,800 years ago. Members of the U5a1 lineage were among the first people to repopulate Europe and West Asia. However, Neolithic farmers and herders from West Asia crowded out the U5a1 lineage as they entered Western Eurasia. It is now about 3 percent of the population throughout Europe with its greatest diversity in Central Europe and greatest frequency in central and northern Europe and Russia.

So my haplogroup began with a woman living in West Asia. It goes into migrations and mutations and letter segments that mean nothing to the reader, and is still Greek to me.

Then I checked my matches. I am sure there are many more people who have taken autosomal tests and Y tests than Mtdna tests. My 3 closest matches are Americans, no surprise there. They are all on the Number One level, so we could possibly put our heads together and find a common ancestor. So they also descend from this mother who came to America, but that's not where she was from.

Then beginning with my 4th closest match, and all of my Number Two's which mean their a mutation beyond the Number One's, I noticed a change. The surnames, instead of Smith, Philbeck and Bates, which are the first 3, I get Westin Fodd Grahan with little dots over the o, and Gustavsson F.  Larsson and Lendburg and Forsberg and guys named Ulf  Israelsson and Lars Erikkson and Juel and Killick.
Some have listed their oldest known ancestor. Number 4 is descended from Sven Wallstrom 1712 - 1776, with those little dots over the "o" again. But there's a cluster of 8 people, in my Number 2 batch, descended from a particular woman, their oldest known female ancestor straight down their maternal line named:

There's those little dots again. Now, I've never heard of Anna and I had no idea where Arnas was, so I had to google her. But I've found my maternal roots and they led to; 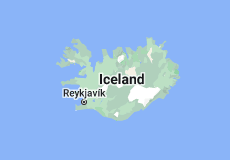 Now, how my GGGGGGGGGGGGG Grandmother got from Iceland to the US of A, I have no clue, but I do know her mitochondrial dna arrived to me via Elizabeth, of whom I am sure of, and possibly from Mary of whom I am not. What I do know is that I have yet to find one ancestor who spelled their name with little dots over the vowels.

So, with this information, Family Tree DNA included a nice little video, which I will link to in a minute, explaining the migrations of my maternal haplogroup and when it gets to near the end of where it was leading, up pops -FINLAND. The 11 percent I could not figure out.

The jist of it is, many ancestors we may think were from Western Europe or the British Isles may have sailed from there to American, but that does not necessarily mean that's where their roots are from. Think about it, 11 percent is nearly an entire Great Grandparent and I don't have a Great Grandparent from Finland...or Iceland.

Each letter in that long haplogroup string they give you is another change, another mutation, that breaks down into a more recent location and individual.
U5a1b1d-T16093C
That's my Finnish ancestor who evidently ended up in Iceland and was an ancestress of
Anna Jonsdottir born in 1670.

A female descendant of hers migrated to America and here I am.

U5a1b1 is the largest group within U5a1b with 83 members and an age estimate of about 8000 years. U5a1b1* has 29 members, with 10 from the UK, 3 from Poland, 2 from Germany, 2 from Finland and 1 each from Ireland, France, Austria, Switzerland, Italy, Norway, and Russia. U5a1b1 also has six named subclades (U5a1b1a to U5a1b1f).  U5a1b1a has 17 members, with 4 from Ireland, 2 from the UK, 2 from Norway, and 1 each from Germany and Italy. U5a1b1b has 7 members with 4 from Russia, 1 from Belarus and 1 from Sweden. U5a1b1c has 12 members include two U5a1b1c* from Russian and England; seven U5a1b1c1 with 3 from Finland and 1 each from Russia, Serbia, Poland and Denmark; and U5a1b1c2 has 3 members with 2 from Russia. U5a1b1d has 8 samples including 2 from the UK, 2 from Poland, 1 each from Germany and Switzerland.  U5a1b1e has 8 samples including 2 from England and 1 each from Germany, Poland, France and Norway. U5a1b1f has only 2 samples including 1 from England 1 from India. To summarize, U5a1b1 has its greatest frequency and diversity in Northern Europe from Ireland to Russia, and 54% of all U5a1b samples fall within U5a1b1.

On Gedmatch, one of the neat little tests you can take is that of archaic dna. These are comparisons with the skeletal remains of ancient peoples found all over the world. I match most to some found in Siberia, Greenland ,Sweden,  Russia, Hungary and Luxemburg.

I also match to the ancient dna of a Native American child found in the mountains of North Dakota.
I wonder if that child was descended from early Vikings who discovered Newfoundland ?