The Ballad of Maggie McQueen 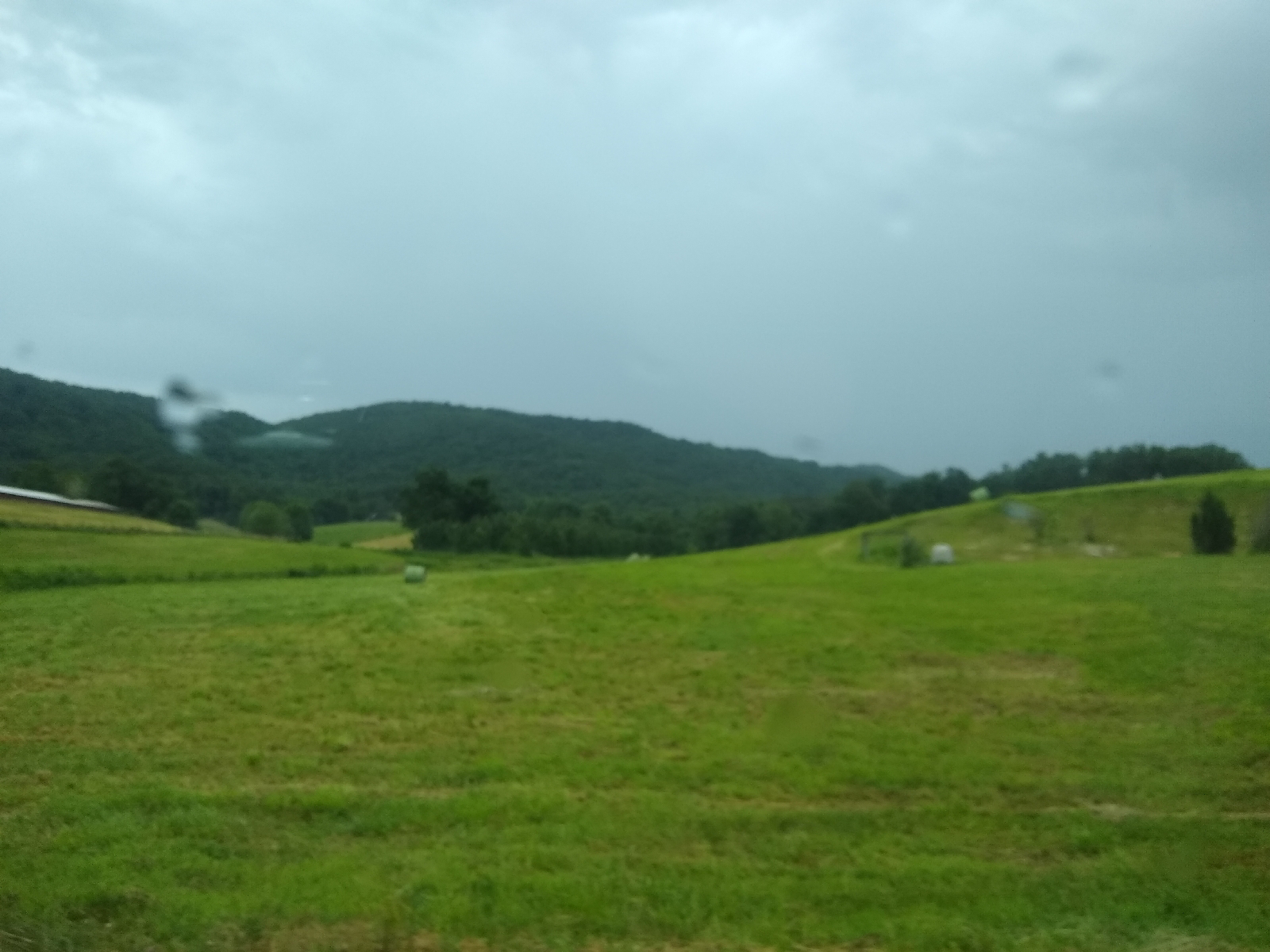 The aftermath of the Civil War in Piedmont North Carolina had left a surplus of widows and orphans and a few dispassionate men. Some men had arrived home with pieces missing, both physically and mentally. Others not at all. Some went West, but a few, especially in the Quaker belt of Surrey, Guilford,Randolph and Moore and into northeastern Montgomery County, had escaped service entirely, some due to devout Quaker or Wesleyn Methodist beliefs, but others from a backwoods defience, half- caprisious,half -feckless existence. Not my pony, not my show, in other words. They rather chose a world of imperturbation and detached existence in their insular and rustic habitat. But for some the War had came to them.


I found a neighborhood of Montgomery County, that during the mid -to -late 1800's had sort of a moral separation from the rest of the land. Where people openly participated in a lifestyle that other parts of the county found shocking and unethical, while these obscure individuals participated in rather defiantly.

I had touched on the story of Maggie McQueen in my review of the life of her parents, Joseph and Martha McCaskill Smith in my post:

It Started with Joseph Smith

Since that post, I found out a little bit more about both Maggie and her parents.

First, I have been reading books by William T. Auman, most specifically, "Civil War in the North Carolina Quaker Belt".  I'd known, and some do, that there had been an area in the Uwharries, where Randolph, Moore and Montgomery Counties come together, where a large and growing band of deserters and 'draft dodgers' hung out. Long kept secrets of events that happened during that time are just now beginning to come out. The Smiths, to whom I am somehow genetically tied, were disenters, peace-lovers, and maybe, but not assuredly, Unionists.

Joseph Smith and his wife disappeared between 1860 and 1870. They were, after all, both 58 in 1860 and longetivity was harder to come by in those days. They could have just died of natural causes, but other men in that era, who did not serve in the War, also disappeared in those days.

Home Guards kept the roads hot in the later years of the war. They went farther and deeper into the small mountain range of the Uwharries, looking for deserters and not only that, but demanding of farmers and community families fodder for the war, conscripts, getting younger, and older, all the time. Joseph Smith was 62 in 1864. He did not have a son to give. He'd had a family of girls, for all we know. Dashes that may have been sons in the older censuses were unconnected and unnamed. He only had one, Andrew, who would have only been 13 or 14 by then. Andrew did sign up, near the end of the war, and maybe about that time, as a conscript, and they lied about his age, saying he was 18 and he was taken to Robeson County.

Home Guard killed men and were never brought to justice. Men killed Home Guards and were never found. Joseph was rumoured to be one of these victims. As for his wife, perhaps grief was what took her, if not hard times.

Margaret was the second daughter of the Smith family. Her sister Sarah, was already married in 1850, but not far away. Maggie, 19, would marry this same year to a neighbor, Calvin McQueen, son of Malcolm McQueen, in this heavily Scottish settled area. 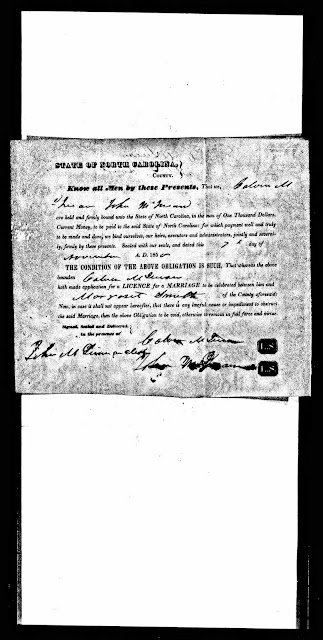 One thing I didn't know was that Maggie was young Calvin's second wife, and that he also had a child. His first wife, if they were actually married, was Diza Ann Manness or Maners, as the name is shown both ways. She and Calvin had a daughter together, named Mary Ann. Diza has an incredible story all of her own.

Calvin had moved his family to Guilford County by 1860, where the transcribers messed up his name. It remained McQueen, lol. They had a number of people living with them, a young man named Scott Dunn and an Indian mother and son. 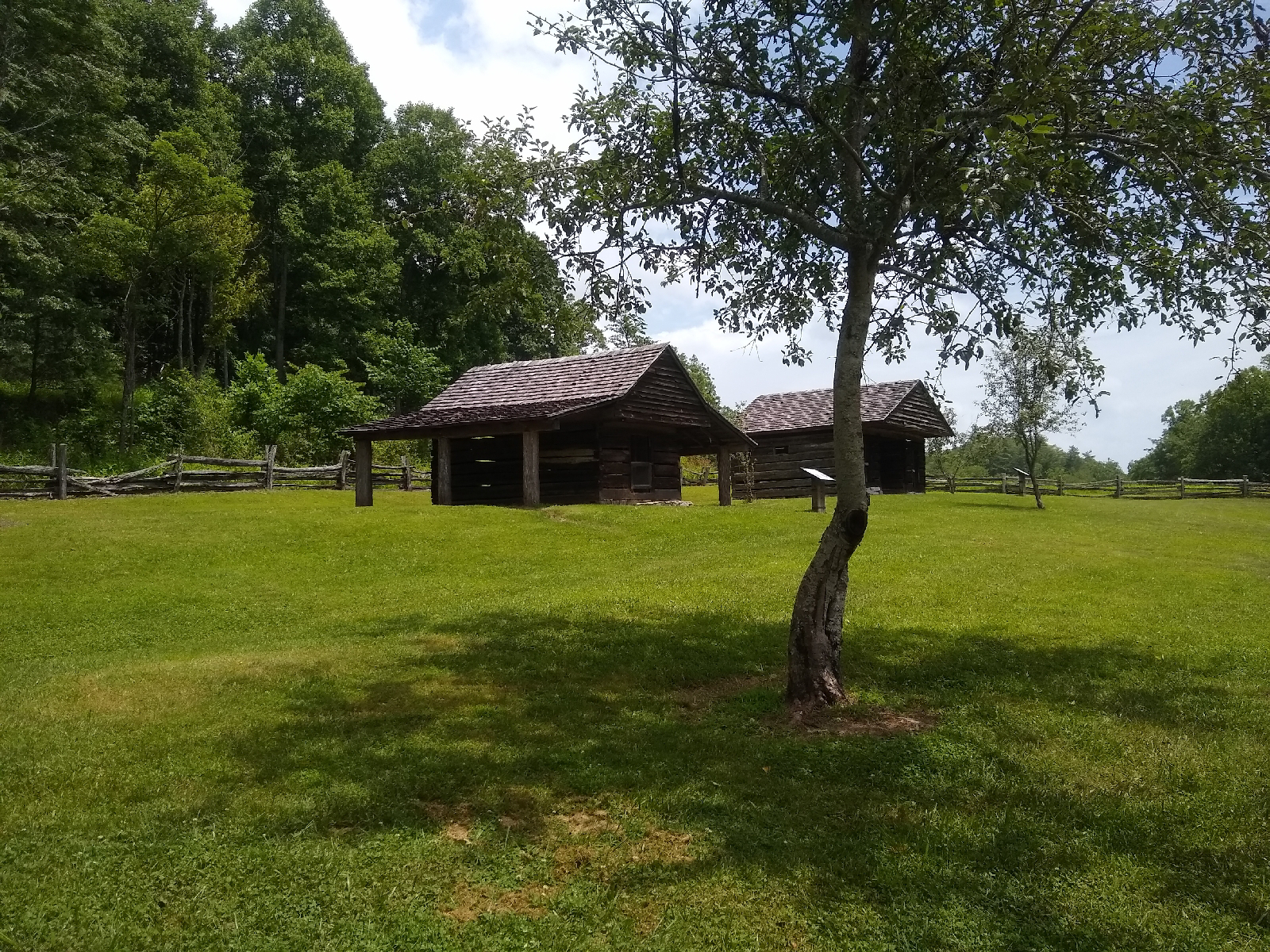 Calvin enlisted in the war in Guilford County in February of 1862, and then died of wounds recieved in battle in July of that same year at Mechanicsville, Hanover County, Virginia.

Margaret and the children returned home to Montgomery County and here in was a another factor that I hadn't known.

In the 1870 census, Martha was her oldest child, William was William Calvin, who would have been more like 8 or 9, but who was the little boy Larkin?

I found the answer just the other day.

In the Bastardy Bonds for Montgomgery County, North Carolina, which was the 19th century answer to child support for  illegitimate children, Margaret McQueen was brought to court in 1867 and was charged with having a 'baseborn child", that could be held chargable to the county. She was ordered to name the father of the child. She also gave the exact date of birth for the child, June 4th, 1867, nearly 5 years after the death of Calvin McQueen. The child definately was not his, and this child was Larkin. 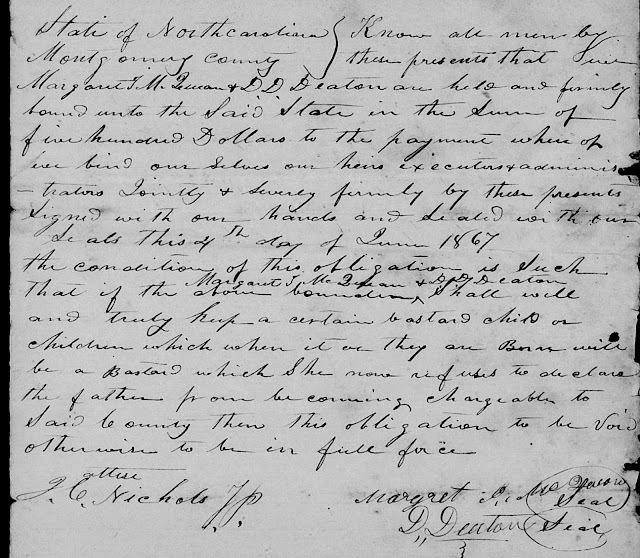 D. D. Deaton signed the bond and paid the fees for Maggie, yet she refused to name the father. I have looked through many of these bonds and one fact comes to surface. For the mothers who refused to name the father, two things usually happened. Sometimes a family member would pay the bond for her, a father or brother usually. But sometimes, an odd fellow would up and pay, someone who would not make much sense. These were usually married men, and sometimes they were more well-heeled in society than the poor 'ruined' lass. Everyone knew, it was whispered, that these men were the fathers after all, who promised to pay the fees, and perhaps a bit more, a trust fund of sorts, if the girl just kept her mouth shut. In some unfortunate cases, men like these would end up killing the girl and she'd end up with a ballad in her name, like Naomi Wise, or Patsy Beasley.

But who was D. D. Deaton? The search continues.