The Sins of Sandy McQueen 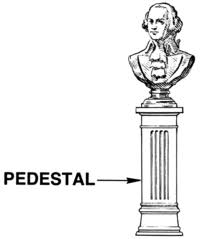 We have a tendancy to put them on pedestals, are if they were incapable of mistakes, human frailties or emotions. Many were tough and lived through tough times, but while times have changed, human motivation and desires have not.

One thing that has changed is context. It tends to be trendy. What was the norm a hundred, two hundred years ago, can be completely foreign concepts to us now. What it took to survive in the early years of American history, can indeed be, a thing of the past. We can not judge our ancestors on todays standards. They didn't live in our day, they lived in theirs. They lived the life they knew. They did what they did out of either what it took for them to survive in their day, or because they didn't know any other way. Their routines did not mirror ours, neither did their families, neither did their motivations. So, sometimes, finding out things about local people in the 1800's can really be mindboggling, based upon what we think we know, today.

The story of the family of Alexander Marcus McQueen, however, is one unlike any other I've ever came across in my many years of digging into old records and old families of Stanly, Anson, Montgomery and surrounding counties. I'm here to recount it. It began quite as normally as any story in the peopling of North Carolina.

Alexander Marcus McQueen, Sr., was born on August 11, 1799 on the Isle of Skye, Scotland. Supposedly, he left the British Isles as a 3 year old toddler, aboard a ship called "The Duke of Kent" from Liverpool and survived a 3 month journey to the port of Wilmington in North Carolina, arriving late in October of 1802. He was in the company of his parents, Alexander Murdoch McQueen and Mary Nicholson McQueen and his three older sisters, Elizabeth, Nancy and Anne. Helmed by a Captain Thompson, others from his homeland, some no doubt relatives, were also onboard. Among those companions were Kellys, McCaskills, McGillrays, McLeods, McDonalds, Nicholsons and other McQueens. 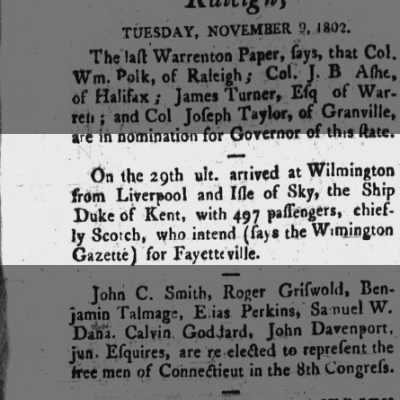 After arriving in Wilmington, the McQueens at some point would make their way up the Cape Fear River to Fayetteville, then Chatham County, and would eventually settle in Montgomery County, NC on the eastern border with Moore. Four more sons would be born to them in America: Hugh, Malcolm, Daniel and John.

Sandy McQueen, as he would be known, grew up in the eastern Montgomery County sandhills and on November 13, 1823, at the age of 24, he would marry Sarah Ann Batten, aged about 16.

Ten years later, the family had grown exponentially, as they tended to do in those days. Oddly, although Alexander was named as the Head of Household, he seemed to be missing. The only other McQueens in this census, in Montgomery, were his brother Malcolm, with a wife and 4 young children, and his single sister, Elizabeth. In Elizabeth's household were 3 women, two of middle age and one elderly, and a boy over 10 and under 15. The elderly lady had to be his mother, Mary and the two middle-aged women his single sisters, Elizabeth and Nancy. I don't know who the young boy could have been., Or, where Alexander could have been.

He recieved another late in 1844 for 85 acres on the waters of Little River. Things seemed to be progressing along normally. 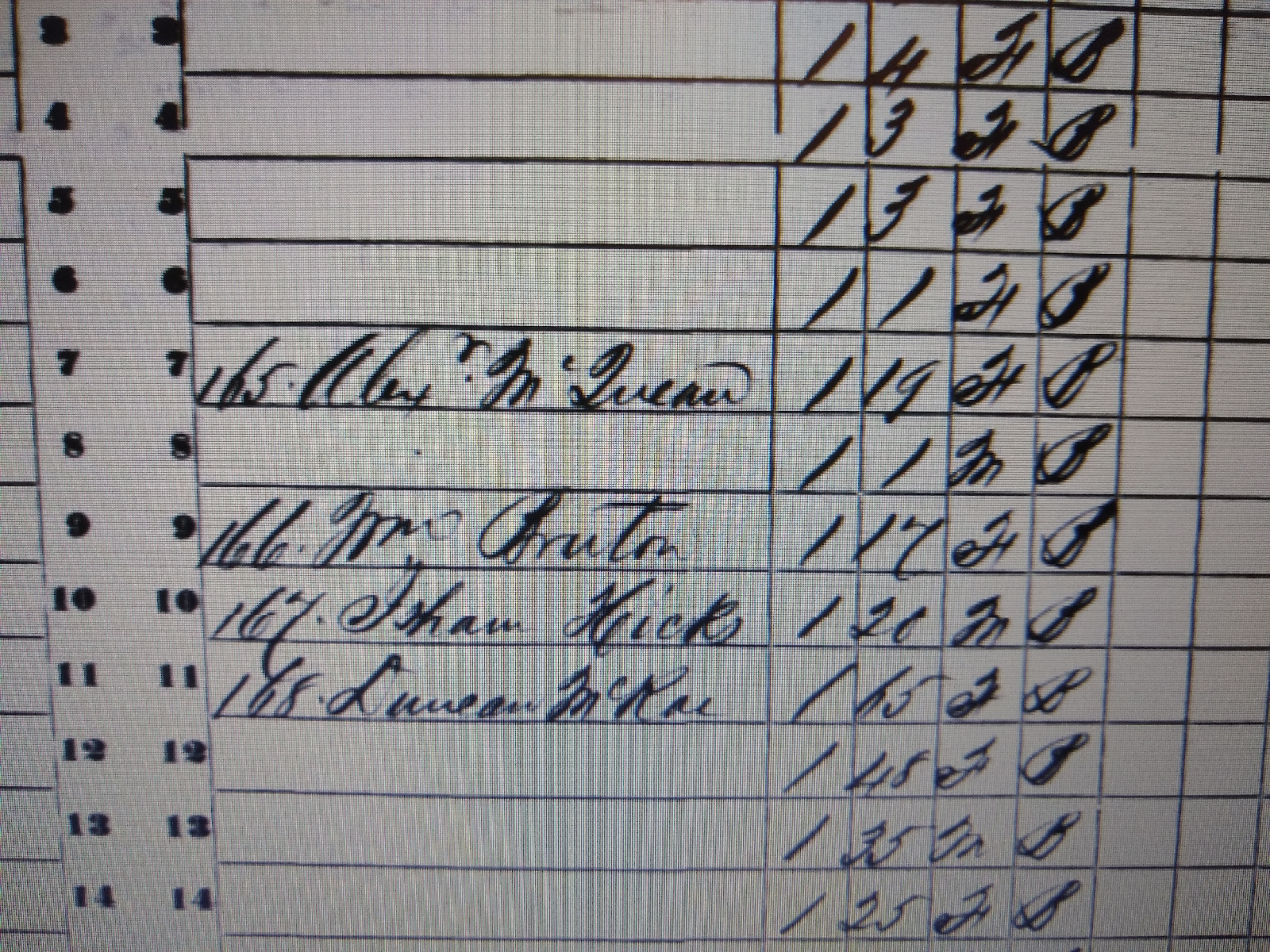 There is another Schedule attached to the 1850 census that Alexander McQueen is mentioned in. That was the 1850 Slave Schedule. In 1840 and before, slaves were counted within the family unit, and acknowledged separately by age and gender. In 1850 and 1860, they were listed in a separate schedule by again, just age and gender and color, under the name of the slave owner. In 1850, Alexander had 2 enslaved people in his household, a 19 year old girl and a one year old infant boy, probably the son of the 19 year old girl. 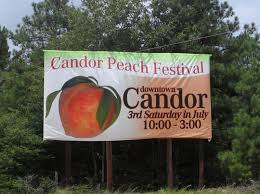 Laurel Hill Baptist Church is a modern, thriving church located on the Troy-Candor Road in Montgomery County, NC in the small community of Candor. It has a very long history, however, with an active congregation of nearly 200 years. It's records can be accessed by request here:

Within these records can be found a peek at the life of Alexander Marcus McQueen and a few of his children. For instance, Sandy was baptized 'at the river' with seven other of the faithful in August of 1852. I am assuming that they were referring to the Little River, probably near its fork with Cedar Creek. Three of his children are mentioned as members in 1852, Elizabeth, Mary Jane and Jr. In September of 1854, Alexander, Sr. has fallen from grace. He is referred to as Brother Sandy and has admitted to drinking too much and asked to be forgiven by his fellow churchgoers. This sort of behavior goes on for awhile. He's acknowledged as a member however, for quite awhile. Sometimes it is difficult to decipher which Alexander is being referred to, but in the 1868 list of members, we can know it is Sandy Sr because his son Alexander, Jr. had married in McDowell County in 1867 and headed on to Tennesee after that.

By 1860, only 3 of his nine children with his wife Sarah, remain in the nest, youngest daughter, Sarah Ann, who is soon to marry her first cousin, John R. McQueen, youngest son Neil, a 'menopause baby', and unmarried son, Daniel. Everyone else has married and are out on their own starting their own families.


In the slave schedules, the number of enslaved people in Alexanders household has increased to 7. The noticeable thing about Alexander's slaves is that unlike most farms who need, for the most part, young men to help with the labor, Sandy only has one woman, a teenaged girl and the rest are small children. 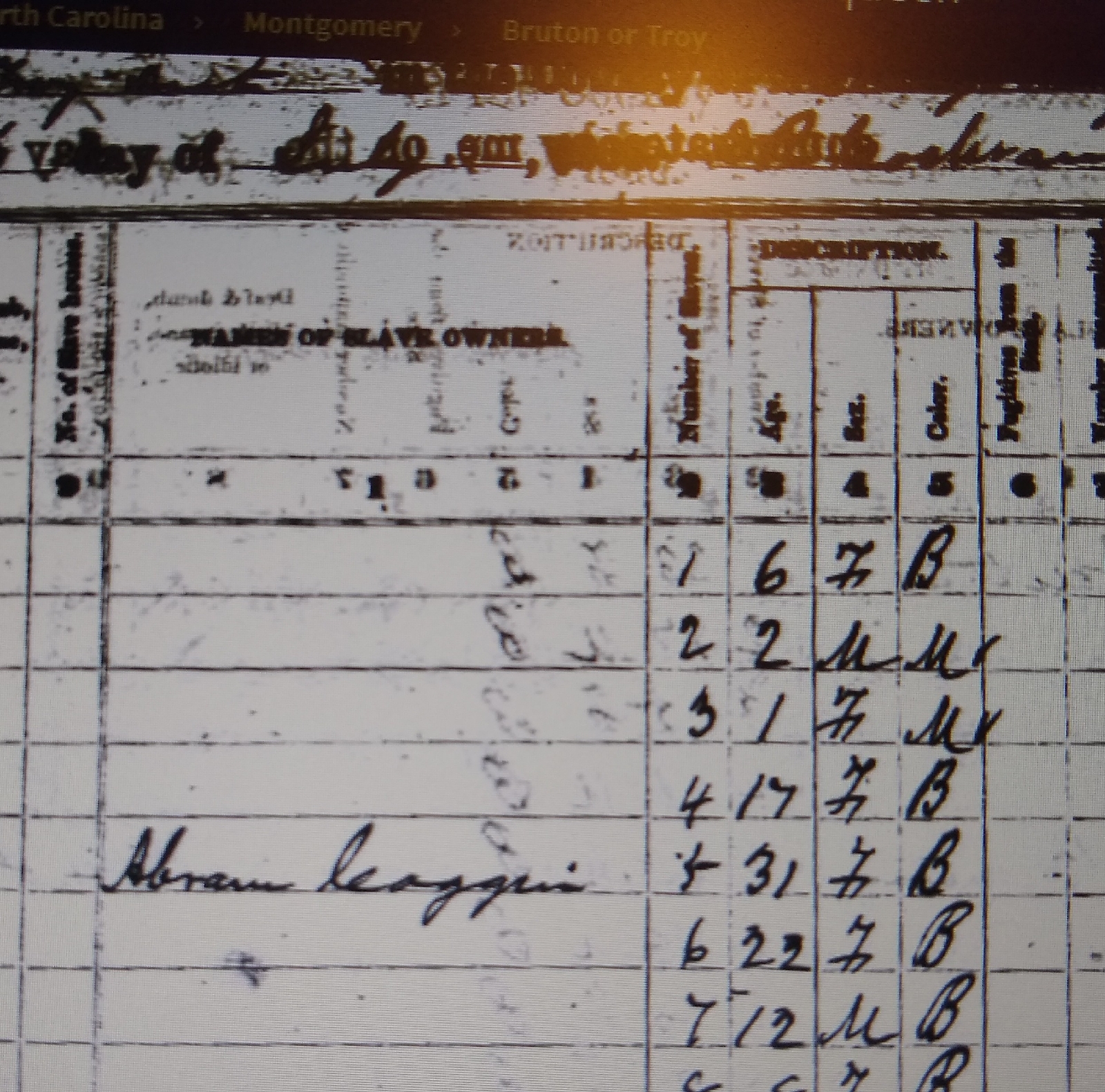 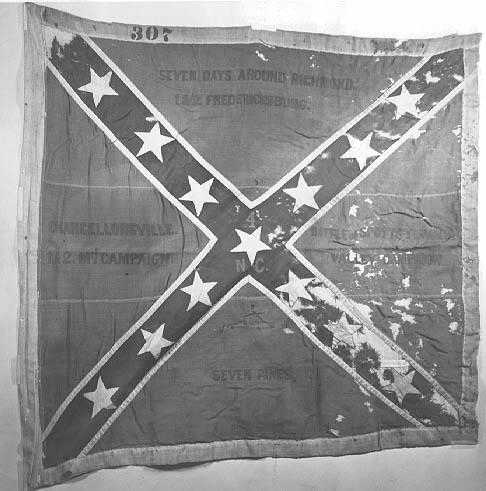 The Civil War came and went and miraculously, Sandy lost no sons. He had already lost as son, however, as James Batten McQueen had passed on March 11, 1855 leaving a widow, Nancy Britt McQueen and 4 daughters, Elizabeth Ann, Mary Catherine, Nancy Evangeline, and Sarah Jane.

I have already posted on Nancy and her family in:

All In The Family: The Story of William Deaton and Nancy McQueen


Despite the fact that Sandy and Sarah had lost no sons, does not mean the area or their family was without any kind of devastation. Montgomery was a divided land. Due to Quaker influence on their northern and eastern borders, Montgomery was full of disenters. It was not much of a plantation economy, unlike Anson and counties further down the PeeDee River into South Carolina. Theres was a War within a War, and the county was known for hiding deserters and unionists.

The census taker for the Candor area  where the McQueens lived was an Eli Harris. His handwriting was lax and his diligence lacking, as he seems to have missed half or more of the neighborhood. People show up in 1860 and 1880, but not 1870. Not only that, the later transcriptionists would have problems trying to read his handwriting. Each page must be examined individually. He did however, find the family of Sandy McQueen.

Sandy is now 71, and the born in NC is incorrect. His wife, Sarah, is 55 and the only child to remain at home is Neil, now 21. He will marry soon, to Sarah Isabella McQueen, daughter of Mary E. McQueen, Neil's first cousin and daughter of Sandy's brother, Malcolm. She may or may not have been the daughter of Kindred Stewart. I posted on this family here:

Chicken of the Woods

Seven year old Sarah, listed under the name of Neill, was Sandy and Sarah's granddaughter, the daughter of their son, Alexander M. McQueen, Jr and his first wife, Martha Simmons McQueen. Her mother and brother live down the lane from Sandy and Sarah. This youngest Sarah would marry a James Stevens Lake and eventually follow her father to Arkansas.

The other 5 people in the household of Sandy McQueen are former slaves of his who have now been freed, but remain in his home. But they are more than that. The 1870 census is the first in which all of the population of the county was noted by name.

30 year old "Lends" is Linda.
17 year old "Mande" is, I believe, actually Hannah.
6 year old Abram is correct as is 4 year old Betsy or "Bet", as she was later known.
2 year old "Reed" is a transcription error. It actually says "Bud" and his name was Alexander, I am guessing Bud for a nickname.

The 1870 census is the last census that both Sandy and Sarah will appear in. Grandchildren gave the date of their marriage as 1823 and the date of death of Sarah Batten McQueen as July 4, 1877.

Sandy outlived her for a brief spell and knew his time was imminent, so on March 7, 1878, he wrote his will. Below is a transcription of that will as shared to Rootsweb.com by a rather anonymous contributor labeled 'scgen'.

He had provided most for his youngest son, Neil and for the widow, Nancy Britt McQueen, and daughters of his deceased son, James Batten McQueen. Also mentioned, however, were the remainder of his children with his wife, Sarah Batten: Elizabeth McQueen Deaton, Daniel Nickelson McQueen, Mary Jane McQueen Pittman, John Murdoch McQueen, Alexander M. McQueen, Jr., William Butler McQueen, and Sarah Ann McQueen McQueen. But according to his youngest son, Neil, he had left out a great number of his children.


More on the probate of his estate and what I meant by that last statement in my next post.

Posted by Jobs Children at 4:40 AM