The Short but Important Life of Peter Winfield II 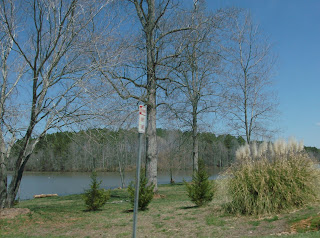 grandfather, died in 1802, before his grandson Peter was ever born.

Peter was the son of Peter Seniors only son Edward. The only son that lived to adulthood, perchance. There are no records of any other sons being born in Virginia prior to their journey to North Carolina.

Peter Winfield, son of Edward, and his wife Charlotte Freeman Winfield, daughter of Arthur and Agnes Freeman, had resided in Mecklenburg County, Virginia where their 4 known children were born; Edward and his 3 sisters, Sarah, Ancena (or Arena) and Virginia. 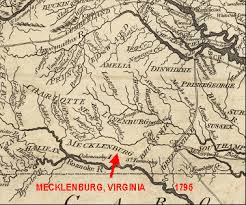 Peter appears to have traveled back and forth between Anson County, where he bought property along the Rocky River from Hugh Ross on April 7, 1787 near White Oak Branch. He also was named as a witness on deeds in Mecklenburg and Brunswick County, Virginia.

Edward, son of Peter and Charlotte and named for his paternal grandfather, was born about 1866 or 1867 in Mecklenburg County, Virginia. He married Sussannah Lee, the daughter of Robert Lee, Jr. and Argent Culpepper. The Lee's had also migrated from Virginia to Anson County along the Rocky and PeeDee Rivers.

The first census of the United States in 1790, shows Edward with one male over 16, one male under 16 and one female in his household. These figures would most likely represent Edward and wife Sussanah and their firstborn son, Arthur Freeman Winfield, named for Edwards maternal grandfather, Arthur Freeman.
By 1800, the family had grown considerably.

John and Eliza are noted in a lawsuit in my earlier post: Whispers of Eliza Winfield Lilly .

Ten years later, the family had grown again. Slaves had increased from 3 to 13 and children from 3 to 4.
Edward and Sussanah are still between 26 and 44. Arthur Freeman Winfield between 16 and 25 and John and third born son Peter under 10.  John, born in 1800, was a newborn during the 1800 census, and was still counted as under 10 in 1810, but probably had just turned 10. Peter, next to the youngest had been born.

Freeman had married Mary Burroughs, daughter of Bryan Boroughs and Sarah Waddell in 1818. This is important in the brief life of Peter II.

The 1820 shows Freeman with just 2 adults, himself and wife Mary or Polly, and the oldest of their daughters having been born.

This would have been Susan Lee Winfield, born 1819.
By 1830, Freeman had 5 daughters and 15 slaves. Freeman served in the War of 1812. He was a Quarter Master Sergeant. As thus, he qualified in the Alabama land lottery, and relocated his family to Perry County, Alabama. He is shown as obtaining 6 land patents near the community of Sprott between 1835 and 1837. He likely traveled with relatives, William Boroughs and Thomas Billingsley, among others.

By 1830, Susannah had passed and father Edward was living with only youngest son Milton Winfield, who would own property in both Anson and Stanly County, and marry Mary Ann Pickler, a German girl, and remain childless. Milton would be the last Winfield in the area, except for the sons of Peter. His widow would marry first cousin, Marriott Freeman Davis.
On November 14, 1822, thirty year old John M. Winfield started his own family by marrying Eliza Beard, daughter of Micheal Beard of Rowan County. Her brother John Beard would also join the family by marrying the Winfield's cousin Annabelle Morrison, daughter of Ancena Winfield, Edwards sister.

John remained in North Carolina most of his life, but would migrate to Pope County, Arkansas in the 1850's, while he was in his 50's. John and Eliza had 10 children.

1830 was the only census Peter would be in as head of his own household. He is shown with a wife and two little boys under 5 in his household, and 6 slaves. He was a farmer and lumberman. His plan was to float lumber down the river to South Carolina. He was shown as living in Montgomery County, meaning he lived in what is now the Stanly County side of the Rocky River.

Peter had went to Randolph County to find his bride.

Bryan Boroughs was the bondsman. Bryan was the father of Peter's sister-in-law, Mary Burroughs Winfield, wife of his older brother Freeman.

Polly, whose Christian name was Mary, as many Mary's were called Polly instead, was the daughter of Thomas Jefferson Goldston and Lydia Waddell. If you recall, Bryan Burroughs was married to Sarah "Sally" Waddell. Both were daughters of Edmund Waddell and Lucy Birdsong. Both families made important marks in Virginia and North Carolina history. Edmund Waddell was a member of the 1788 Ratification Commitee, fought in the Revolutionary War, serving as a Lieutenant and was a State Senator from North Carolina between 1793 and 1798. His wife Lucy, was the daughter of Major John Birdsong and his wife Mary Armstead. Major Birdsong was a member of the Provencial Congress, Served as sheriff of Chatham County, a Member of the Assemby, and a member of the House of Commons, among other offices and honors.

So Mary Bouroughs Winfield's mothers Sarah "Sally" Waddell Bourgouhs and Mary "Polly" Goldston Winfields mother Lydia Waddell Goldston, were sisters. That is how Peter found his wife from Randolph County. Family connections were of great importance in those days.

The Goldston or Gholston family was centered in Chatham county, North Carolina, not far from the counties of Moore, Montgomery and Randolph. 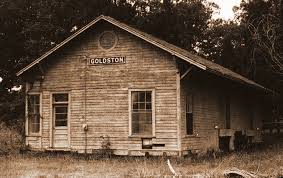 There is even a small town named for the family.

Chatham is a mostly rural county, but a very early, political county in North Carolina. Many families of central N. C. camped out in Chatham before spreading out. It's green, hilly and full of grand old homes that have been abandoned as citizens have left for larger venues that Chathams small towns.

Some times important things can be found while looking for something entirely different. While attempting to find information on Mary A. Davis, daughter of Henry Davis and wife Martha Palmer, my great, great, great grandparents whom I have been concentrating on recently, I came across these little gems in a book on excepts from The Carolina Watchman, an early Salisbury, Rowan County, Newspaper.

Note: The Rocky River does not flow through Rowan County and did not at that time either. They likely meant Montgomery County as Stanly did not yet exist. It does also flow through Cabarrus County, but the Winfield family did not live in this area. 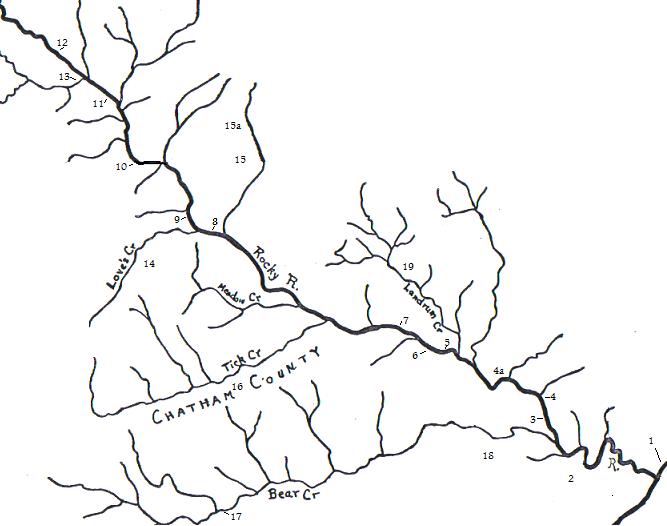 The Rivers connected the early families of North Carolina and the rivers were also the cause of death as many people attempted crossing or in transporting goods and animals up or down them. Rivers became common county boundaries to prevent death while attempting to get to the county courthouse, as in the case of the split between Montgomery and Stanly County, NC in 1841.
Posted by Jobs Children at 12:36 PM