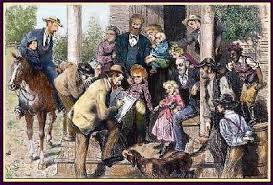 Census records are one of the most useful tools in tracking a family, however, I've learned to be very careful when using this information. To put it simply, census takers made a lot of mistakes. Just recently, I saw one in which a woman's age was listed as 54 and her husbands as 17. Luckily, both appeared in the census records before and after this one and the husbands age should have been 57, instead of 17.

Beginning researchers also make a lot of mistakes when using them as tools, especially in the earlier census records, which do not give relationship to the Head of Household. They assume every child listed in the household is a child of the head of household, which might not be the case. Sometimes extra persons in the home had a different surname, and the census taker just wrote down the first name, so the individual ends up with the wrong surname. I've seen this several times. Or, the census takers hand-writing is so bad, no one can transcribe it correctly. This might be a reason some individuals seemed to disappear for a decade, only to reappear in the same place they were 20 years prior. 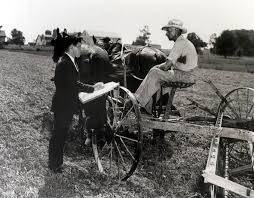 Despite all of these obstacles, census records remain a valuable source of information.

In trying to untangle the Melton/Milton family of Stanly and Montgomery Counties, in North Carolina, I took a look at census records to see if they could give us any hint as to the relationships between the individuals. 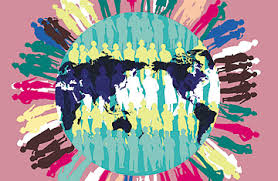 The first census of the United States was taken in 1790. Prior to that, there were some local methods of counting for tax purposes, tax lists and the such, which varied from state to state. In 1790 neither Stanly or Montgomery Counties existed yet. Montgomery was born in 1799 and his other half, Stanly, which was known in the 1800-1840 census records as "West Pee Dee", was born in 1841.

In 1790, the area that is now those two counties, and several others, were all a part of Mother Anson. There were 5 men and their families listed with the surname Melton in Anson County in 1790: Isham, Jesse, John, another John and Michael. Moore County, very close to Montgomery, was home to Nathaniel, James and Ansel. Randolph, which borders Montgomery to the north, was home to Samuel.

In 1800, Montgomery County, which included the area now known as Stanly, was a year old. The only Melton or Milton enumerated there was John, with one male over 45, one female over 45, with one male under 10 in the home, and 2 between the ages of 10 and 16. He was listed next to Elizabeth Bosworth, or Boysworth. The two families would maintain a close relationship for generations. In 1810, there appears a blotted out "Melton" next to a George Lee. This Melton has a female aged 26 to 45 in the household, and 3 males, one 16 to 26 and 2 under 10. This may have been a widow and her 3 sons. Other families living in the area were 3 Marberry's, Thomas, Thomas, William and Bartlet Huckabee, Bennett Soloman, John Kirk, Esq., and Isaac, Alex and Thomas Biles. In a different area, John Milton is there, with one male and one female over 45, and one male 16 to 26. Joseph Milton has one male and one female age 26 to 45, one male 16 to 26, two females 10 to 16 and 2 males under 10. The 'neighbors' give no indication, by known area of settlement of families, of where they may have been in Montgomery County.

By 1830, 20 years had passed. Time enough for some of those listed as children to be heads of their own households, or to have moved away. There are 4 households of Melton's in Montgomery County. Living a little further away from the other 3 is John Melton, with one male 20 to 30, one female 20 to 30 and one female under 5. This would have to be John Jr., or John the younger. He is next to my ancestors James Palmer and Jesse Murray. Jesse Murray, I know, lived on Long Creek in the southern part of the county, not far from the Rocky River. Other neighbors, Shankles, Simpsons and Soloman Burris, the younger, seem to suggest the Cottonville area.

The other Melton's are living near the Kirks and the Forrests, which suggests they are living along the Pee Dee, north of Randalls and near the Swift Island area, where they later were known to have settled. 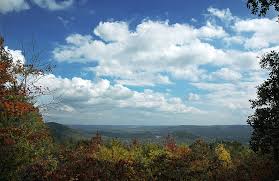 1840 was the last census in which the two counties were counted as one, and in which only the heads of households were named. Most Heads of Households were the oldest male in the home, be it father or grandfather or adult son. Some households led by women show an adult male in the home, which may have been an employee and not an adult son, or it could have been a home wherein the mother still conducted most of the business as a widow, and the son had not yet taken title to the property.

By 1840, the number of Melton households had increased from 4 to 5, all within close proximity to each other. These last two censuses also had persons enumerated in a way that further divided them, and this is something I will refer to in later posts on these families. There are designations as F, M. FS, MS, MFC, and FFC, meaning female or male (white), female slave, male slave, female free colored, male free colored. While the existence of Indians as a tribe settled in this area by then, had been long gone, some families, living like those of European decent, still occupied the state, and still do. One family designated as Free Colored, was that of Richard Hedgepeth, whom I learned some time ago from a researcher, had been verified as being Native American. By 1840, some of the Melton children classified as Mulatto, or near black nor white, had been born.

John the elder has an older couple in the house, male 60 to 70 and female 50 to 60, a male and a female 20 to 30 and 5 persons under 20. Henry Melton makes his appearance this year as a young couple 20 to 30 with a girl under 5 in the home. He lives near Dr. Kron. Both John and Joseph, the youngers live near William Boysworth and near a number of Kirks, but all in the same area as the other Melton's. Joseph has an adult couple between 20 and 30 and a girl under 5. John the younger has a couple between 30 and 40 and a girl 10 to 15 and another 5 to 10.

Next, I'll be looking and comparing the records after 1850, in which Montgomery and Stanly are separate, and women and children are named with ages. 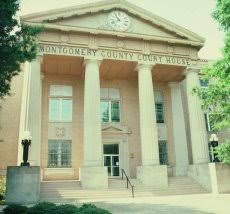 Posted by Jobs Children at 3:14 AM