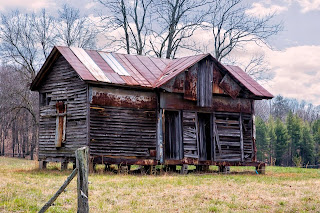 In 1841, the part of Montgomery County that had been known as "West PeeDee" became Stanly County.
Between 1840 and 1850, a great deal had happened in the Melton family. Members of the younger generation had reached the age of majority and the older ones had passed away. Land and court records can help clarify some of this change. This is the first appearance of James the younger in records. He was apparently not head of his own household yet in 1840. This also shows James working in conjunction with Henry and Joseph the younger, whom I know were brothers. In the Rowan County public library, in the family folders, I came across a flowery and boastful family tree of a descendant of James R Melton of Stanly County. He had his ancestor, the son of James, correct, and had the correct parents, James R. and his wife Mary Ann Kirk, but after that, this gentleman had went off into outerspace with James R having no connection to the local Meltons and descending instead from a Revolutionary War soldier named Thomas and to the poet Milton and other grandiose claims. While I can not dispute that the Stanly County Melton/Milton family may have biological connections to the poet, I do know that they also have much closer relations to each other.

This road order also refers to Joseph as Joseph, Jr. , meaning Joseph the elder was most likely still alive in 1840, and so they referred to Joseph D. Melton as "Jr.". To those unfamiliar with genealogical research, it may seem like the term "Jr." should mean "son of". It does now, but 'back in the day', it simply meant 'the younger' and not necessarily 'the son of'. The younger man could be a nephew, a cousin, a grandson, or simply no relation at all, just residing in the same general area with an older man of the same name.

The Milton/Melton family (the name is shown interchangeably in early records) also show a close interaction to the Bosworth (later Boysworth) and Forrest families, and to some extent, the Biles and Kirks.

The 1841 tax list records the following Meltons and where their properties were located.

James was apparently not old enough yet to qualify as a poll. John Senior was too old., and by the time the tax man came around, Joseph Sr. had apparently deceased.

Now, here is where a working knowledge of the history of the county might help a little bit. If I am not mistaken, the William (or Willm) McGregor referred to in the above reference, was probably the Rev. McGregor whom the reknown Dr. F. Kron from Prussia, whose home is restored in Morrow Mountain State Park, purchased his property from. The Rev. McGregor founded a very early church in these parts called "The Mouth of the Uwharrie Baptist Church". According to legend, Rev. McGregor is buried still on the property now known as the Kron place, in Morrow Mountain State Park, and passed away about a decade before this land transaction took place.

The name Bennett Soloman is also an important one, as Soloman's pop up in Melton records later on. I have not nailed it down yet, but I believe a Melton daughter married a Soloman son.

This transaction was 3 years after the Sarah 'Curtice" transaction and seems to be in the same area, the Rev. McGregors willow oak. But James Melton did not show up in the census records.... More acutely, he did not show up in the 1810 census, but was here or nearly an adult, by 1815. There was no 1820 census for Montgomery County. It was destroyed. He probably would have shown up in it. There was an 1830 census with John, Joseph and a female head-of-household, Betsy. In all likelihood, but without possibly any proof due to the series of Courthouse fires, Betsy (Elizabeth), was the widow of the elder James Melton.
What will the 1850's hold for the Melton family and will records shed light on who is who and how they got there?

Posted by Jobs Children at 6:43 AM