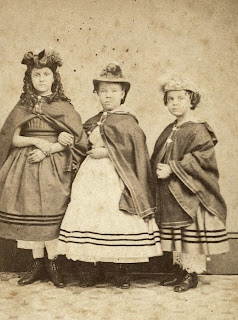 This photo was made in Louisiana and the caption was a confusing one. These little girls were born into slavery. They obviously don't fit the stereotype that we, in our age, would imagine for slave children. I found this photo at mulatto.org. This was labeled a propaganda photo, one that abalitionists had chosen to get their point across. They had chosen very light-skinned, Caucasian-appearing children to show how racial mixing had created white slaves. They dressed the children finely and made a series of photos. The children were not dressed like this on a daily basis.

I chose this photo to illustrate my  post about 'lost children' from  Stanly County, North Carolina who were born in "Shades of Grey". These girls, however, probably came into the world in the most imagined way of 19th century racial mixing. They were born to mothers who were slaves. Louisiana was notorious for a mix of persons who were multiracial and then the multiracial daughters became the most sought after consorts for wealthy men who kept separate families from their legally-bound ones, until, after a few generations, the children showed no trace mixed heritage, but appeared completely Caucasian.

The children of Stanly County came a different route, one not popularly touted by persons interested in mixed-race studies, or by African-Americans to explain the occurrences of lighter colors of hair, skin, or eyes in their families. They came from a source that is common today, but not thought of as having existed during the 19th century, or prior to the Civil War, in particular.

While reading the Abstract of the Minutes of the Court of Pleas and Quarters of Stanly County, 1841-1850, in search of mention of my Third Great-Grandfather, Henry Davis, I found several mentions of children brought to court to be bound out, that had captured my attention. How did these children come into existence, I wondered, and what became of them? Certainly some of them grew up. Did they marry and have descendants? Did they head out west never to be heard from again? And, if they married and had families, who did they marry? What would their descendant look like today?

The number of entries were astounding. More than a dozen families were identified. The Murrays were one in my own family tree. Mariah Murray had died leaving 7 children identified as mulatto. While Mariah's siblings and parents were identified as white, her children were identified as mulattos. In research, I had found the course of 2 of her children, Albert and Lydia Adeline. Those two had taken similar courses, at first, but then divergent. Albert and Lydia Adeline had both moved to Cabarrus County, North Carolina, after being released from the state of being 'bound' to intact families in order to learn a trade. Often, the only trade these children learned were to be labored to death. Sometimes, 'bound' children became members of the family, however, and treated as one of the 'borned' children.

Albert and Lydia Adeline lived near their mother's sister Sophia, who had married Nelson Samuel Whitaker. Albert married his cousin, Mary Ann Whitaker, daughter of Nelson S. and Sophia. In one census, living right next door to her parents, both Albert and Mary Ann, with the first of their children, were identified as black, while her parents and siblings were identified as white, and that was a 'taint' that Albert had ran from. With the names and ages of the children matching, knowing I had the right Albert and Mary Ann Murray, I had traced the family to South Carolina, where they had moved around between counties a bit, Albert buying a farm in Chesterfield county, and his family being considered white. In the records, Albert had identified his mother as 'Mariah Murry' and his father as an unknown man named Henry Wilkerson.

His sister Lydia Adeline had two children named John and Jenny. On John's two marriage licenses and on Jenny's one, both identified their father as a man named Pink Carpenter and their birthplace as Stanly County. I found Pink Carpenter, a young white man, who lived near Lydia Adeline when she was still a 'bound' teenager. She was in her early teens when her two children were born and Pink Carpenter died a young man. She would marry a man named Adam Faggott in Cabbarrus County, who was not a white man, being identified in different records as mulatto or black, but by then, she was older and they would have no children together. Albert died a white man, his sister died a black woman.

Further research showed that the Murrays were of Scottish and Native American decent, so they were not entirely white, and the Native American part of them was not pure, but instead, tri-racial, having mixed for generations with both British Isles and African descended persons.

Priscilla Murray Aldridge, my second-great grandmother, and sister of Mariah and Sophia, had an illegitimate child after the death of her husband Garner. This child was the daughter of a man with the surname "Love", whose family was labeled mulattoes, but were free prior to the Civil War. The area, in which they lived in 1850 was 50% labeled such a way and Richmond county history has them as "Croatans" that had came from neighboring Scotland and Robeson Counties to work in the turpentine industry. Today, the Croatans are known as Lumbee. 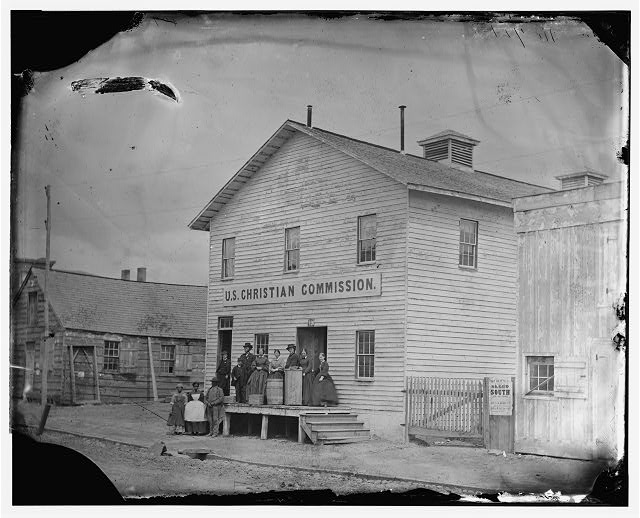 This is concerning the other persons listed in the records, other than the Murrays, however.

The children I found, were mentioned in the earliest pages of these records. If I go through the entire book, I am sure I might find more.

The term "bind" was meant to mean, "to indenture as a servant." Some poor persons who could not afford their children, had them bound out themselves, in order for the child to learn a trade and to alleviate the parent of the burden of care and education of the child. However, most bound children fell into one or two categories. One, orphans, or half-orphans. Mothers were not so much allowed care of the children on their own. Women in the 19th century had no rights and little right to property and few prospects of careers or self-support. They had to rely on fathers, husbands and later sons or sons-in-law, or even perhaps, brothers, uncles or nephews. Women who were widowed often attempted to marry relatively soon, often to much older men, in order to keep their family together.

Orphaned children who were set to inherited property were often appointed guardians and caretakers, instead of being bound, who would readily take them on to control the benefits of the property. Children who were not heirs would be bound to intact families as servants or apprentices.

Two, illegitimate children. When county officials learned that unmarried women had children, they would order that these children be brought into court, no matter the race, to be bound out. Prior to the Civil War, children born into slavery would just became slaves, and were not the concern of the courts unless being sold or as part of an estate settlement.

The children brought to court to be "bound out", were freeborn children, whether white or otherwise.

These entries are from the Stanly County court soon after its inception in 1841:

Allen Melton, a boy of color, aged 18, to be bound to William Boysworth when he enters bond.

Sheriff to bring to next term of court:

Did any of these children show up later in these court records?

Yes, on an earlier page:
John W. Soloman, sheriff to bring to court next term to be bound out.

Edmund Lilly brought into court a free boy, Frank, son of Betsy Randle, bound to him as an apprentice and surrendered him to the court and bond cancelled  except for $25 to be paid to boy Frank upon his arrival at age. Frank to be bound to W.H. Randle for balance of term of his Indenture upon his entering into bond to pay the boy $100 when he comes of age.

And later:
A free mulatto boy, Frank, son of Betsy Randle, previously bound to E.F. Lilly, now bound to W. H. Randle who enters into usual bonds with condition to pay Frank $100 upon his arrival at age.

November, 1841
Sheriff to bring into next  court colored child , Franklin Randle, son of Elizabeth Randle (widow) to be bound out.

As for the Milton or Melton children:

Nov. 1846 Margaret Melton bound to John Perry until she shall attain the age of 18 years.

Nov 1847 Henry Melton bound to John Perry who entered into bond and obligated himself to give said Henry Melton one suit of clothes and $10 when he shall have attained the age of 21.


Now, onward to discover who these children were exactly, how were they related to others persons of their surname in the county. Who was Tilda Shankle, Elizabeth "Betsy" Randle, Charlotte Melton and Polly Melton? How were the Melton children related to one another? Who was William Boysworth and John Perry, to whom they were bound. Was W.H. Randle related to Frank or his mother Betsy? Did these children disappear from records or can any of them be traced into adulthood?

Some of them could be found in the 1850 census. Others can not.