Some peoples lives barely creased the paper of Early American records. Eliza M. Winfield Lilly and her son Thomas Winfield Lilly, were two of those individuals. Like the faintest breeze leaving small ripples on a pond, they lived and breathed upon the banks of the Rocky River within the Anson/Montgomery/Stanly County area of North Carolina. If it were not for a small bit of documentation, their names would not be known at all.

However, those small ripples can create a chain reaction of tremendous proportions.

While researching my Great-grandfathers grandfather, Henry Davis, oldest son of Job, I came across a lawsuit in a book that mentioned him. That book was:

I downloaded the ebook and while scanning through, a found a case that involved Henry's first cousin, John Winfield. The case was in Anson County, and true, my family lived on both sides of the river at any point in time. Henry's mother was Sarah Winfield Davis and her only brother was Edward Winfield. Edward had 4 sons, Arthur Freeman, John, Peter and Milton and one daughter, Eliza Ann.

Arthur Freeman was in the War of 1812 and taking advantage of the land grants, he relocated his family to Perry County, Alabama. John had remained in North Carolina for most of his life, and then in middle age, he relocated to Arkansas. Peter had married Mary "Polly" Goldston of Randolph County and settled on this side of the river, which was Montgomery County in those days and had two small sons. He died in a lumber accident at a young age and his widow married a minister, John Barber, and raised his two sons, John Peter and William in Anson County with their half-siblings. Milton married Mary Ann Pickler and had no children. His widow would marry his first cousin and Henry Davis's younger brother, Marriott Freeman Davis, who was a widower with a young son. They would have no children either. And then there was Eliza M Winfield. My belief is that the "M" stood for Martha and at the end of my post, you will understand why.

As Eliza M. Winfield died before the 1850 census, the only record of her name was a wedding announcement from the following newspaper:

A big Thank You to Ms. Carolyn Shank for contributing this marriage announcement from the Raleigh Minerva to the Anson County marriage archives. 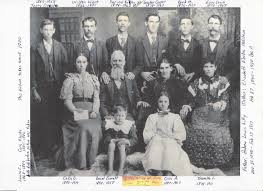 This piece of information tells us a number of things. First, the date of the marriage, August 29, 1817. Second, that the groom, William Lilly, had been residing lately in Fayetteville, which is located in Cumberland County, North Carolina. Second, that the bride, Miss Eliza M Winfield was the daughter of Edward Winfield of Anson County.

Right away, I knew who Edward Winfield was. He was the only brother of my ggggreat-grandmother, Sarah Elizabeth Winfield Howell Davis and the only son of Peter and Charlotte Freeman Winfield. Eliza was his only daughter. In early census records, she was only a dash. Her marriage license was the only document that gave her name. Also, it would be a great probability that the minister, the Rev. Armstead Lilly, was a close relative of the groom, William.
A look at the early deeds of Cumberland County does not mention William Lilly. Instead, there are many, many documents mentioning Edmund J Lilly, Hannah Lilly and Henry Lilly. Even one involving the Methodist Episcopal Church where Job and Sarah Winfield Davis and Sarah's sons Jordan and John W. Howells sons and their families were members. They were a civic-minded family, donating land to the Fayetteville Female High School, the Methodist Episcopal Church, and donating property to the City Cemetery. And businessmen, involved in the Blounts Creek Manufacturing Company, the Western Railroad Company, the Cross Creek Manufacturing Company, the Beaver Creek and Buff Mills, the Cape Fear Steam Boat Company and the C F & Y V R R Co., or the Cape Fear and Yadkin Valley RailRoad Company.


So, the search was on to find out who William and Armstead Lilly were. It did not take a great deal of searching through our local library to find out that this William and this Armstead, born at the time they were, were sons of John Lilly and Eleanor Dumas Lilly. The Lilly family was very prominent in Montgomery and surrounding counties. The Fayetteville Lilly's were relatives and William had likely gone there to school. In 1817, the year of their marriage, he would have been about 20 years old.

Now, let me trace Eliza as dashes in the early censuses.

In the 1820 census, William and Eliza had been married about 3 years. She would have been the female between 16 and 25, meaning she was born between 1795 and 1804. Between the 3 censuses, she was born between 1795 and 1800. There is also a male under 10 in the home.
In January of 1825, William married Camilla Caroline Torres of Rowan County. Her name sounded Hispanic and it was not difficult to find the family she came from. This meant that Eliza had died by late 1824.

Camilla was the daughter of Benjamin Smith Torres. He was born about 1767 in Middlesex, England to Moses Torres and his wife Sarah who had migrated to England from Portugal. Moses was a Physcian. Benjamin and several of his brothers immigrated to America via Pennsylvania. The 1800 census shows him in Essex, Virginia. By 1810, he is in Rowan County.
Camilla would have been one of the daughters under 10. By 1820, a "Widow Torres" shows up in Salibury as head of household, with two young females in the house besides herself.

Like alot of Carolina families, the Lilly's decided to pick up and move to Alabama, for reasons unknown. Either there or on the way, William Lilly passed away, because on July 7, 1835, his widow Camilla Caroline married his friend and fellow Montgomery Countian, James Allen.

The 1850 census shows the family now in Russell County, Alabama with a daughter that Caroline had with William Lilly, Sarah.
Caroline would have another son with James Allen after the census, James R. Allen and she would pass in 1851, possibly of childbirth. James Allen would marry a Mary Ann Key in Feb of  1852 and father 8 children with her. He would pass away in Gonzalez, Texas in 1868 at the age of 53. There were as many step-families and non-traditional families then as now, however, the reasons were mostly from early deaths then.

But back to the legal case that started me on this journey.

Oscar F. Dudley and wife and others vs John Winfield, Admin, & g.

The share of an infant in proceeds of real estate sold for patician under a decree of a Court of Equity, descends to the heir upon the death of the person entitled, unless upon arrival of age, he elects to take it as personalty. But the annual interest of such share, goes to the next of kin.

The bill was filed by the Next of Kin of Thomas W. Lilly, deceased, against the defendant as guardian and afterwards administrator, of the said deceased, for account and settlement. ........
One item of charge was the proceeds of certian lands, that had been left to the deceased by his grandfather, and had been sold for partition while he was an infant, under a decree of the Court of Equity in Anson County, and the price thereof paid to the defendant as guardian. It was stated in the bill, and admitted in the answer, that the intestate lived three or four years after he became of age, but the defendant never settled his guardian accounts with him, nor paid over to him his estate or any part thereof. The reason assigned in the answer, of the defendants' having not done so, was that the intestate, "was a man of insane mind, and incapable of making a settlement", but this was stated in answer only and no testimony was offered to prove it.

John Winfield claim that the proceeds of the sell of the land had been distributed among the heirs at law of Thomas W. Lilly, and that they were different from the next of kin. The ruling was against John Winfield and for Oscar F. Dudley and his wife. The judge did not take into account the state of Thomas W. Lilly's mind, or his abilities and said that the interest of the land since his death should go to the heirs-at-law and that his property "the interest that accrued during the infant's life in personalty, as the profits of the land during that time would have been."

Thomas W. Lilly only shows up in the census records at one point, in the Mortality Schedule of 1850.

He died of fever in October of 1850. In the column for occupation, his states "None".

What is very interesting are the few lines directly below Thomas Lilly's listing.

It appears Johns household lost many members at one time. Thomas Lilly was 26 years old. He had suffered with a fever for 21 days before he died. The small children likely caught whatever he had, it possibly had a week or more incubation period and the two little boys died of sore throats, which may have been in the early stages of the disease. John's baby girl only lived a day. She must have been a newborn.

The information comes together to form a likely scenario. Thomas W. Lilly was born the year before William Lilly married Miss Torres. Eliza may have had a difficult labor and it effected the brain of the child and Thomas was born mildly retarded, 'unable to attend to his own affairs'. William Lilly probably passed him on to John who had a wife and two sons by the time Thomas was born. John would have been his uncle and became his guardian. The grandfather who had left Thomas property was either John Lee in 1825 or Edward Winfield in 1836. Most likely John Lee, because at that time, they may not have realized there was anything wrong with the boy.

But then the Question arises....who the heck was Oscar F. Dudley and how would he qualify as next of kin?

I look back at the header of the lawsuit: Oscar F Dudley and Wife.... perhaps Dudley was not the heir at all, perhaps it was his wife. Looking back at William Lilly in 1820 and 1830, there was more than one child in the household. There was a girl.

A google search of Oscar F Dudley brings up an 1850 census of Coosa, Coosa, Alabama. Posted by Jobs Children at 1:01 PM