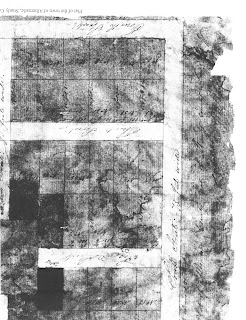 On the wall in the Margaret Johnson History Room, in Albemarle, North Carolina is a framed, color-blocked copy of an ancient map circa 1841, where the town of Albemarle has been layed out in blocks. This map is not yet available online or in photographic copy. The above scan is as good as it gets.

The wonderful thing about this plot map is that it has the lots of the new town, some occupied, other not, labeled by Lot.

In the Register of Deeds office, I had discovered that Edward Winfield Davis, the second sherriff of Stanly County, and his wife, Rebecca Hathcock Davis, not only lived on the family farm along the Rocky River, in the Southern part of the county, but also purchased a Lot in the new town of Albemarle.

Much like his father and mother had purchased land in the town of Fayetteville, Cumberland County, North Carolina on Hay Street in 1825, selling it to his half-brother John W. Howell, in 1844, when they were getting too old to make the trip from below Cottonville, NC  in Stanly  to Fayetteville. The trip is now a little over two hours by vehicle. I can only imagine how long it took by horse and buggy or stage coach.

Lot # 23 is the second lot on the right turning right from South Street on to Second Street. After making a copy of the map, I went to trace out the area where the house would have stood in the later days of the 19th century. It is now the building that houses the Stanly County Sherriffs Department, right beside the Courthouse, which was built in the early 1970's, if I can remember correctly.

When I was a child, this building housed the local Sears store. It was mainly a catalogue store with appliances and was a very busy business. We loved Sears. We loved the catalogue. It was the closest thing to ordering online that we had in the 70's.

All I can do is look at the lot and imagine. No trace is left.

Lot 23 would have been directly across the street from the Lutheran Church, pictured above from an old archived picture courtesy of the Stanly County Museum.


I don't know who believes in genetic memory, but not long ago, I was walking through Chuck Morehead Park with our two white German Shepherd Dogs, Coco and Roxy, and I had an image of a stocky built, graying man, with a bit a bow or a limp in his step, as if he had once suffered from an injury, like falling from a horse, but not one enough to slow him down. He was not too tall, but not very short. He was concentrated on the ground, his mind deep in thought, and walking quickly, his arms gathered behind him. His light-brown hair was more brown than gray, but age was gathering upon him. He was surveying this land he had purchased along Cloverfork Creek. It was early spring and the wildflowers were already collecting among the grass. He was thinking how safely up the hill that rose from the creek that it would be safe to build a building without danger of flooding.

Second Street in the early part of the twentieth century.


The man was Henry Davis, my great, great, great grandfather. He could have passed for a 60 year old today, but he was 48. He had a lot on his mind, like the impending war that he would have to participate in, and which would cause the end of his life.

The above is a satellite view of Cloverfork Acres in Stanly County.

From gazing at Lot 23, I could imagine a narrowly built Federalistic style house with a wide front porch garnished with intricate lattice. But it was imagining...I am not sure if a photo exists with this house on it. But I know where it sat, thanks to the above map.

The house would have sat directly across the street from the first white house beside the church and probably looked very much like it.

Posted by Jobs Children at 6:59 AM