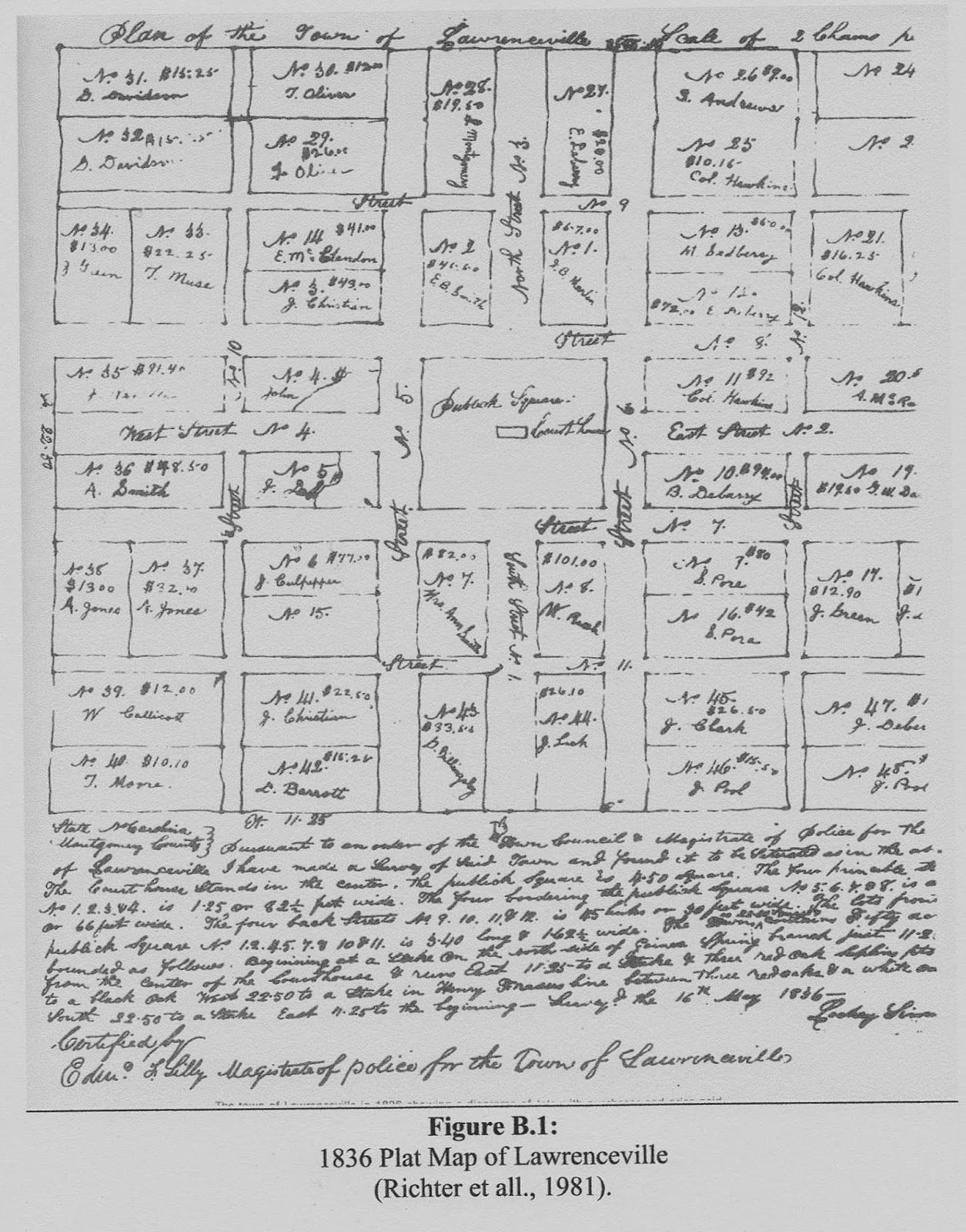 I have been fascinated with the lost and ancient civilization of Lawrenceville ever since discovering that several of my direct ancestors lived, visited and did business there.

Lawrenceville was at one time the County Seat of Montgomery County, North Carolina, when it included Stanly County. It was located in "East Pee Dee", or the current Montgomery side of the river, and the risks and encumbrances of crossing the river for business, court and other reasons, prompted the split of the one county into two, creating Stanly.


Below are a few mentions of Lawrenceville and its citizens from the Carolina Observer, out of Rowan county:

10. Montgomery County NC Court of Equity Fall Term 1822. Alfred Randle vs. Parham Kirk and others. "James Hodges and wife Tempy are to appear at the nest Supperior Court at the Court house in Lawrenceville.

According to resources, the original town plat was dated 1817, and the streets and lots were laid out in a grid system. A post office was established in 1818 and county movers and shakers began to build homes and businesses and settle there. Local politians, peace officers, county officials, businessmen and craftsmen and their families made up the populace.

An estimate of the average population of Lawrenceville was 500, not much for a town today, but in those days of a much smaller population, and scattered villages, 500 was a sizeable community.

Lawrenceville was located along Woodrun Creek and far enough from the Yadkin/Pee Dee River to avoid the fate of its predecessor across the river, Tindallsville, which had suffered an epidemic of Yellow Fever due to its proximity to water.  The old Fayetteville to Morganton market road ran through the village and off toward the ferry acoss the Pee Dee. The road ran off course and intertwined with todays' 24/27 from Albemarle to Troy and beyond, which in its present coarse is East of the village location and the old road. One of the merchants who had settled in Lawrenceville was Daniel Freeman, whose ledger of that time, his customers and their purchases survive. In the old plat map, drawn up by Lockey Simmons and certified by Edmund F. Lillly, two of the major players in the area at that time, the town is mention as bordering "a stake in Henry Freeman's line". Daniel Freeman would relocate to the newly formed county of Stanly and to its new county seat of Albemarle. His contributions to Albemarle's origins were invaluable. Others of the citizenry would locate to the new Montgomery County seat, Troy, a more central location when the counties were separated.

Knowing that several members of the Freeman family of  Southside Virginia migrated here at the same time as my direct ancestors, Peter and Charlotte Freeman Winfield, I wonder if any attempts have ever been made to connect these Freemans, as I know she had a brother named Henry and that there were both Daniels and Henry's in the family tree. Her father was Arthur Freeman and her mother Agnes Stokes Freeman and both the Stokes and Freeman families left their marks in the early settlement of the Rowan/Stanly/Montgomery/Anson/Davidson/Randolph county areas.

A biography of Edmund Deberry states that he was born in Lawrenceville, Montgomery County in 1787, was educated at High Shoals, and served as a US Senator from North Carolina for three terms, 1829-1831, 1838 - 1845, and 1849 - 1851. He retired to his plantation in Pee Dee Township and is buried in the family cemetery near Mount Gilead. Lawrenceville did not exist in 1787, but Edmund Deberry did own property there, and perhaps lived there. His plantation still exists, is beautifully maintained and occupied. It is near the communities of PeeDee and Wadeville, not far from Mount Gilead, and not close enough to Lawrenceville to have been considered a part of it. The remains of the village are difficult to be detected by the untrained eye and are scattered across a pretty large area. Recently, my daughter and I attempted to find the remains during a hike from the trailhead that leads to the old location. 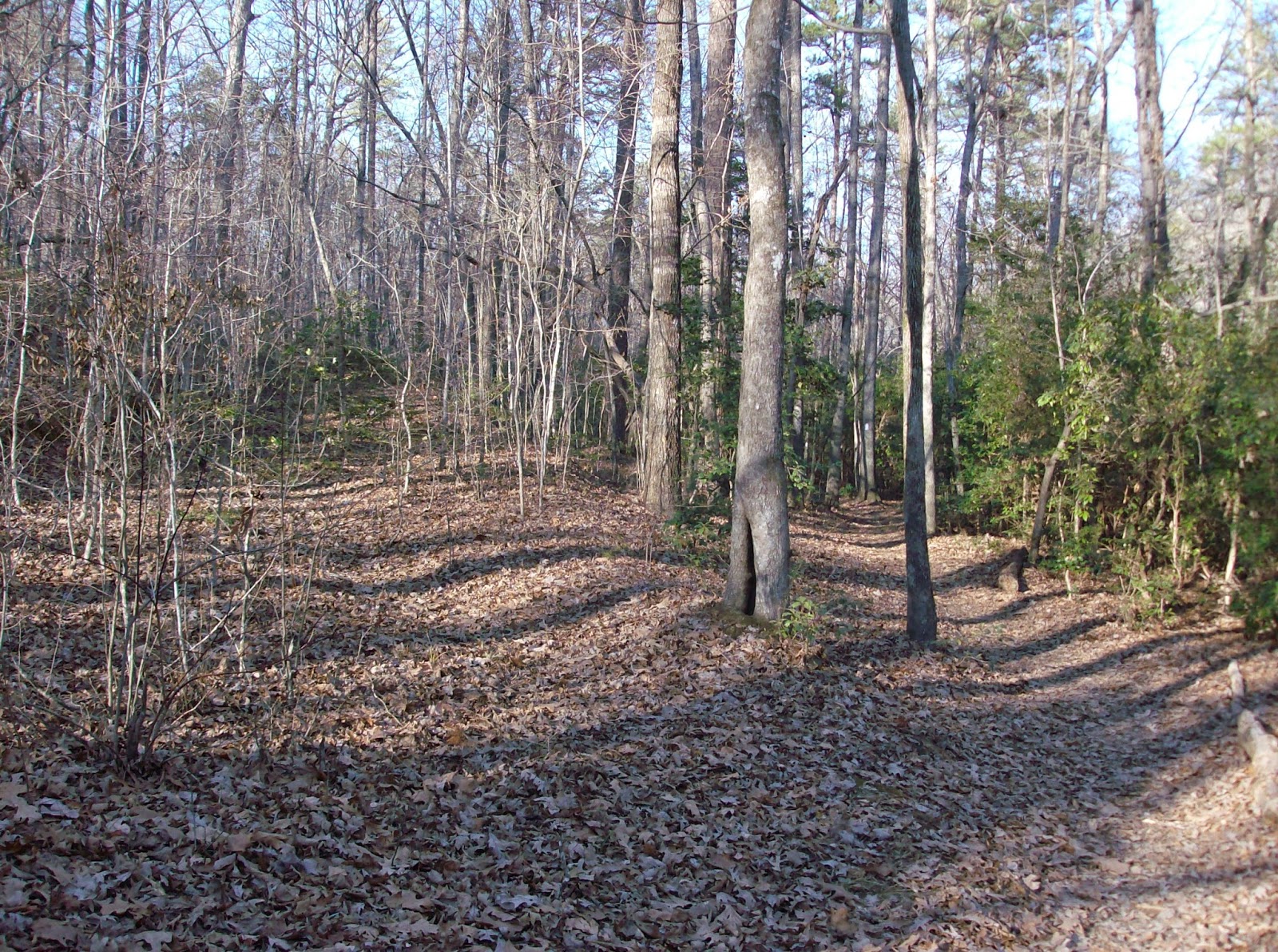 Bear with me in the following photos. The terrain is not as observable in these shots as they are with the naked eye.  The above indentations and trenches in the earth are an old road bed. It was on a determined route to or through the town. Due to the level spots and rock piles around we found at this location, we were pretty sure we had arrived in Lawrenceville. 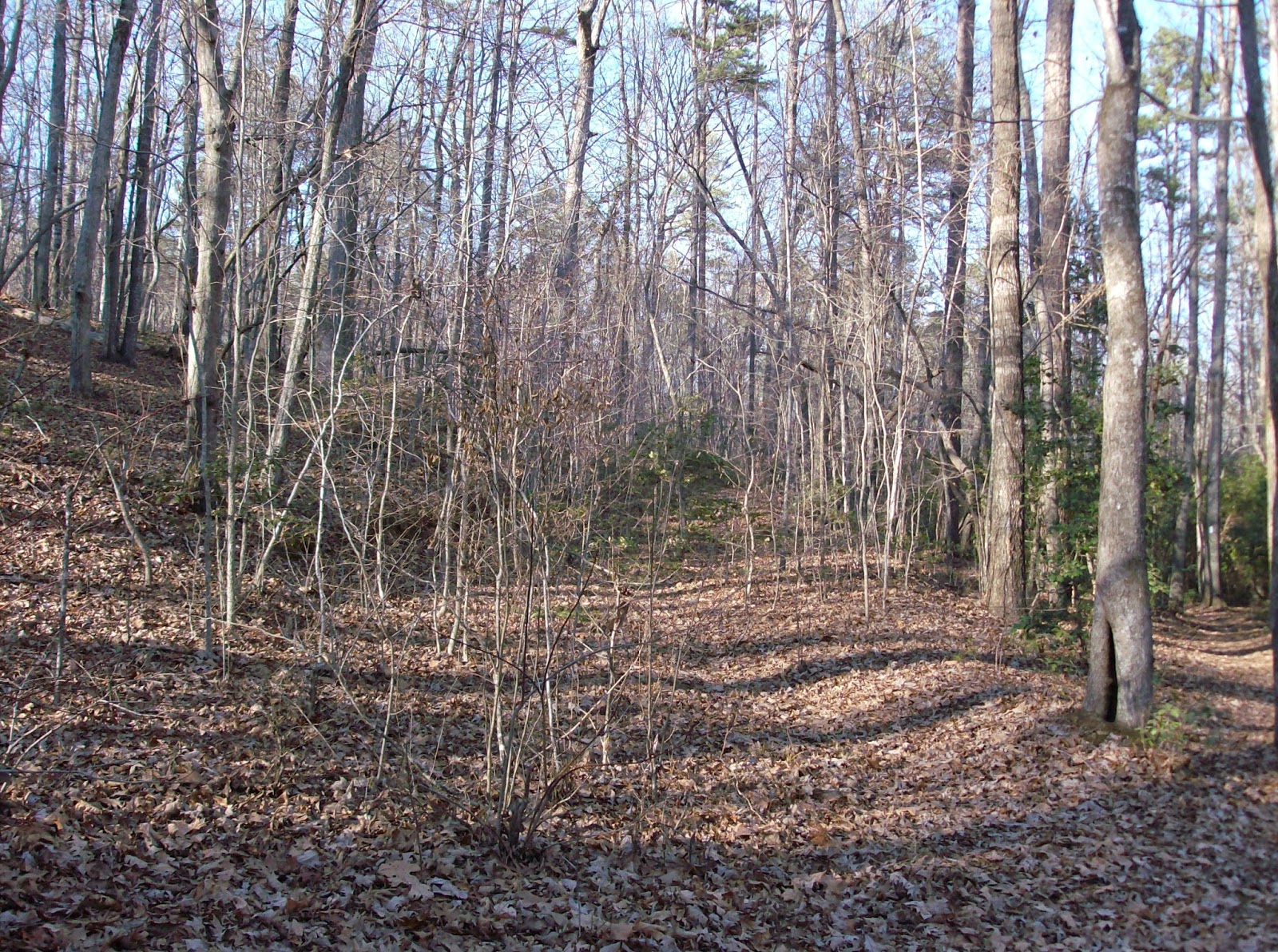 Another shot of the road, this time going up the hill. This may or may not have been the original Morganton to Fayetteville road. Due to the direction it was coming from and heading toward, and its proximity to the modern highway that follows pretty much the same coarse, I would bet that it is. 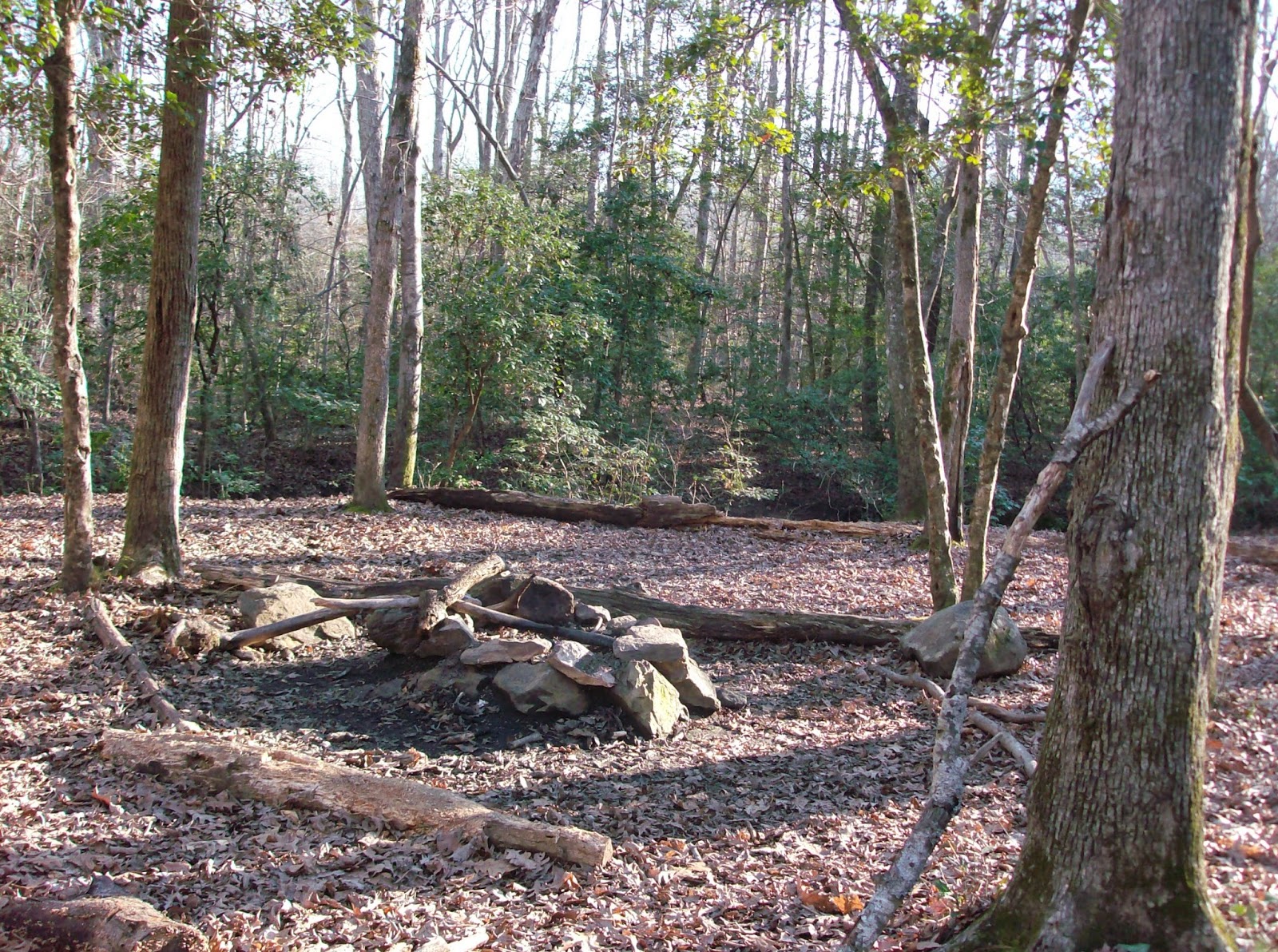 Leveled off spots and the location and growth of the vegetation belie old home places or building locations. This area was near the road. These old places make for good camping areas and sadly, modern day campers make use of the old chimney remains to set up campfires. These rocks could have once formed a chimney to a house or the foundation posts of a store. But there was definitely some man-made structure once located here. 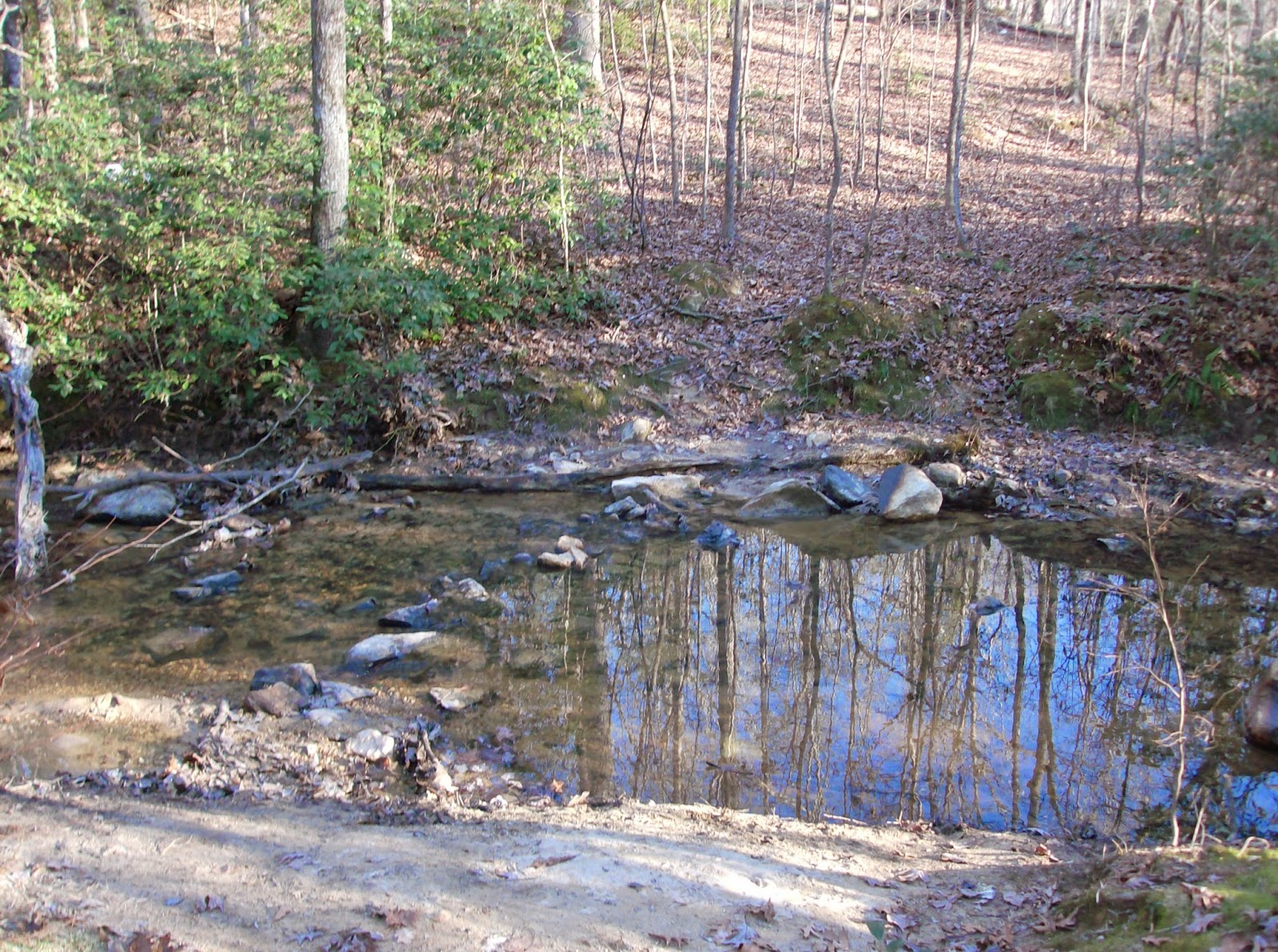 An old and well-used creek crossing. There appears to have once been a bridge or some other structure located here, due to the arrangement of the rocks. I would not be surprised if it was once the location of a mill. 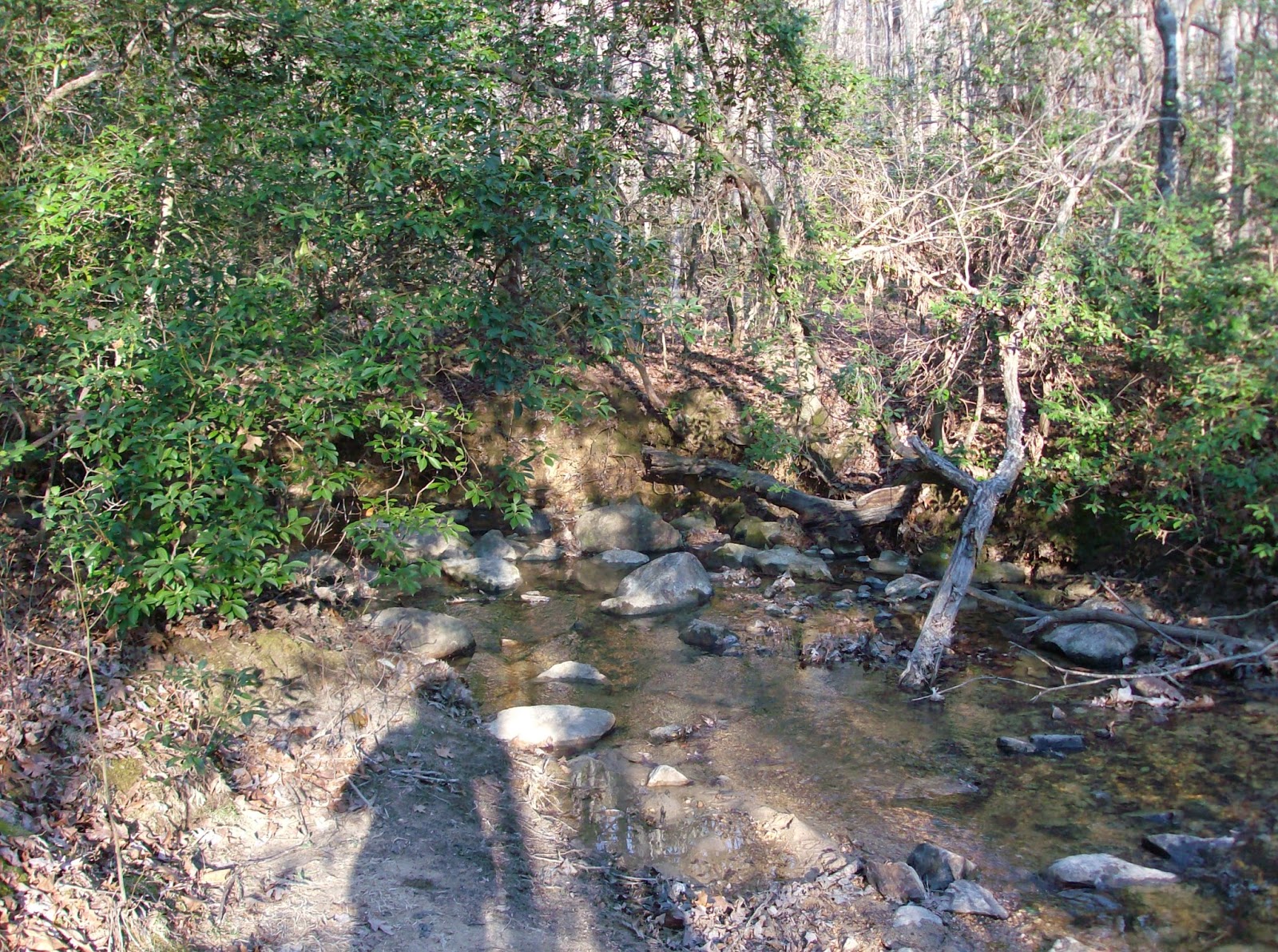 Another overgrown area around a former structural location. 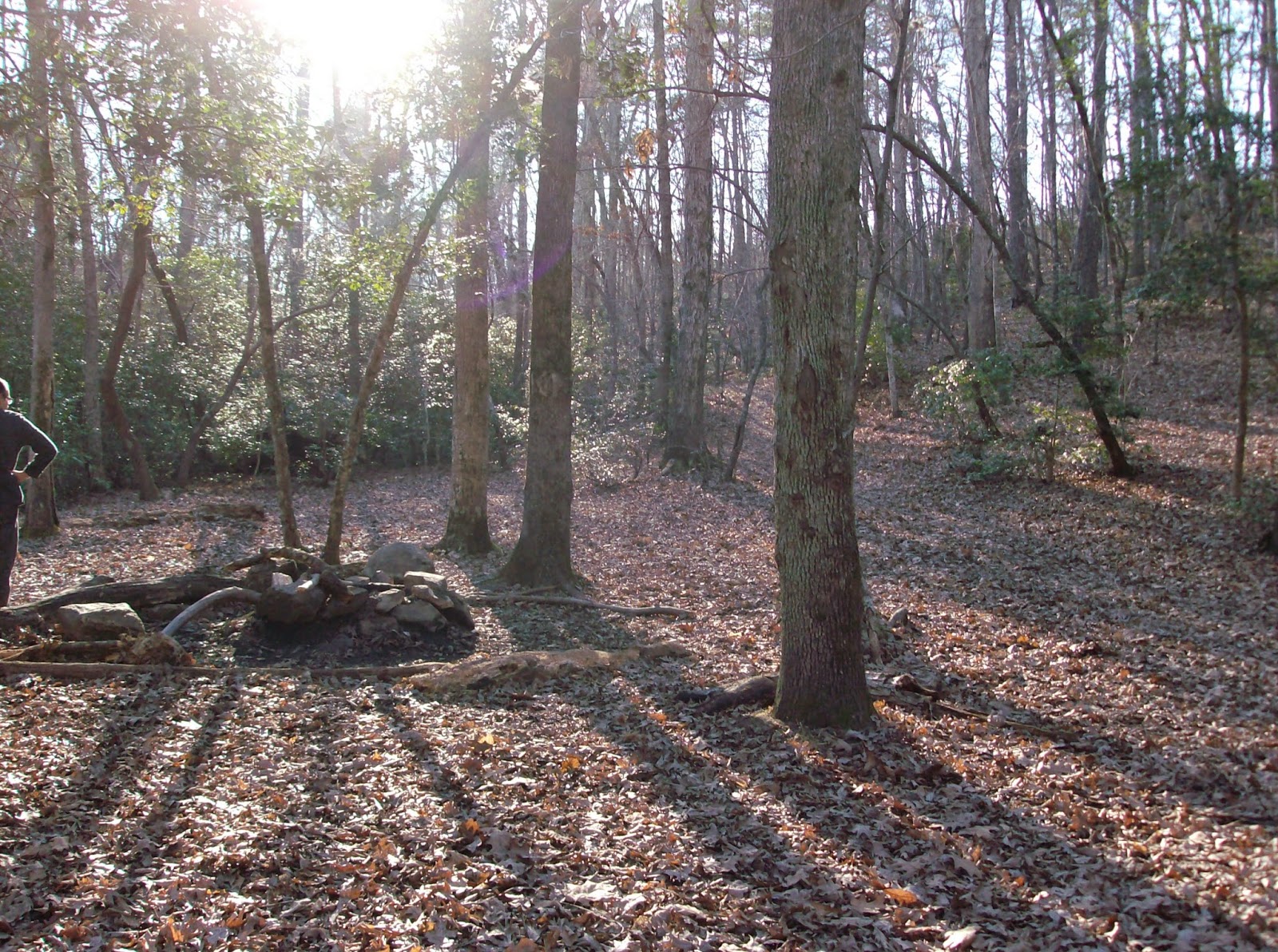 The sun eerily shining through the trees over the ghosts of homestead passed. 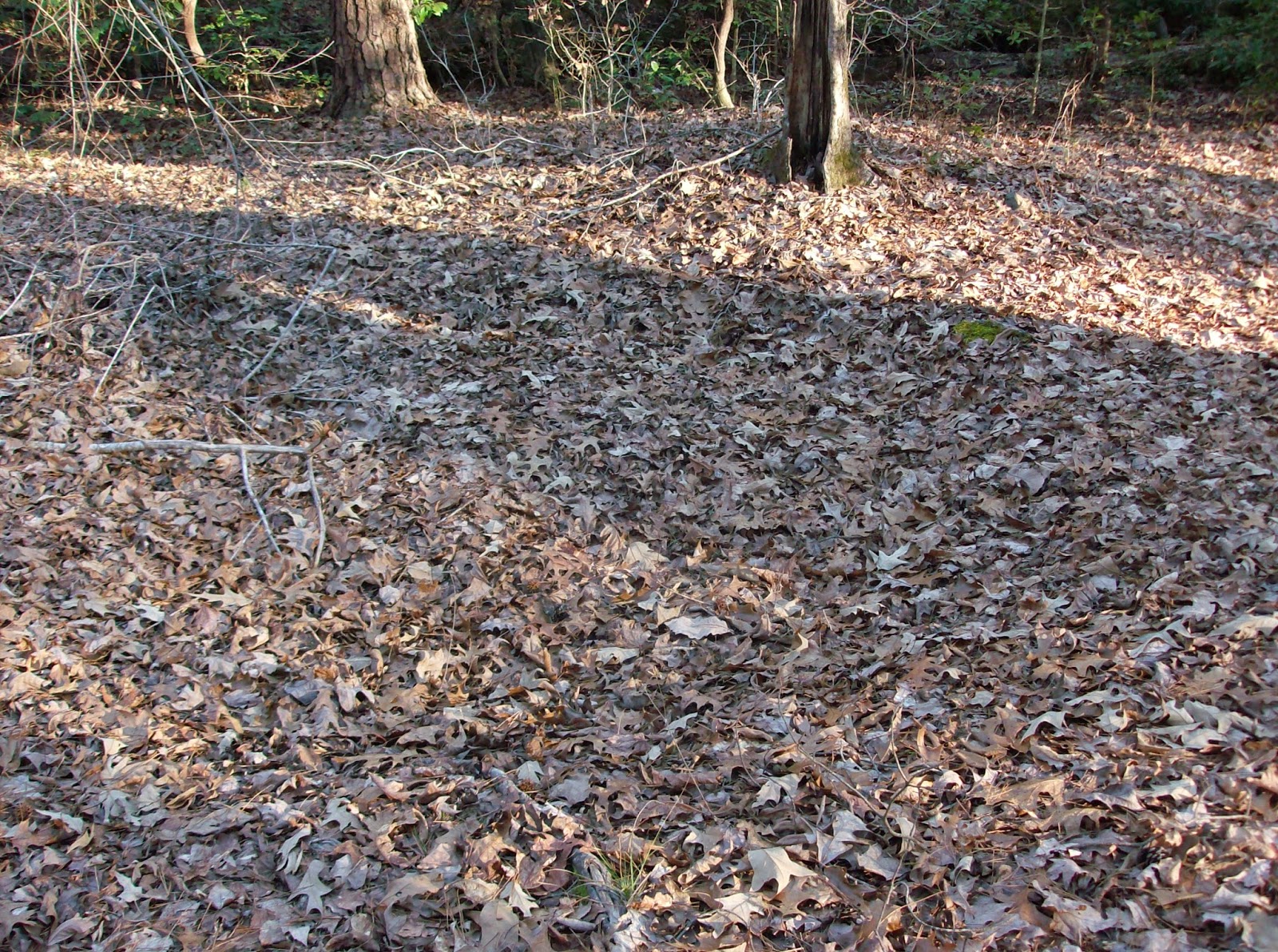 This is another one of those shots, where it is hard to tell by the picture, what you can more readily observe with the eye. This was evidently a dug-out area made to be flat, where some small house or structure was located, maybe a barn or storage shed. 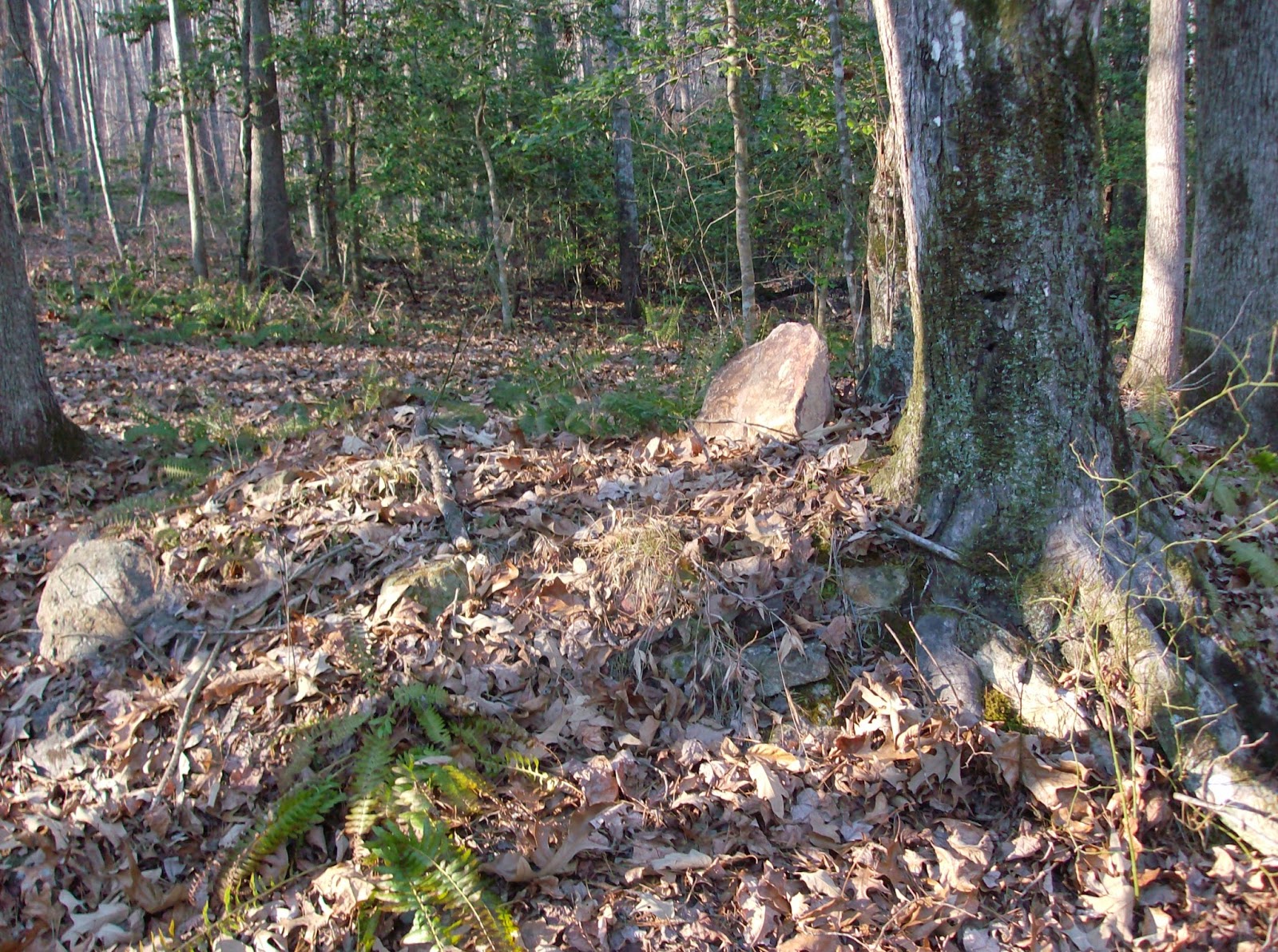 A chimney stood here and the trees and other foliage took over. There was one area where the rocks appeared like tombstones in an old and abandoned cemetery. I don't know, but it could possibly have been, as the town was occupied from at least 1817 to 1842, and I am sure not all families abandoned it immediately. The Cochrans were the last known family to have owned the land and they donated it, not too long ago, to the National Forest Service. 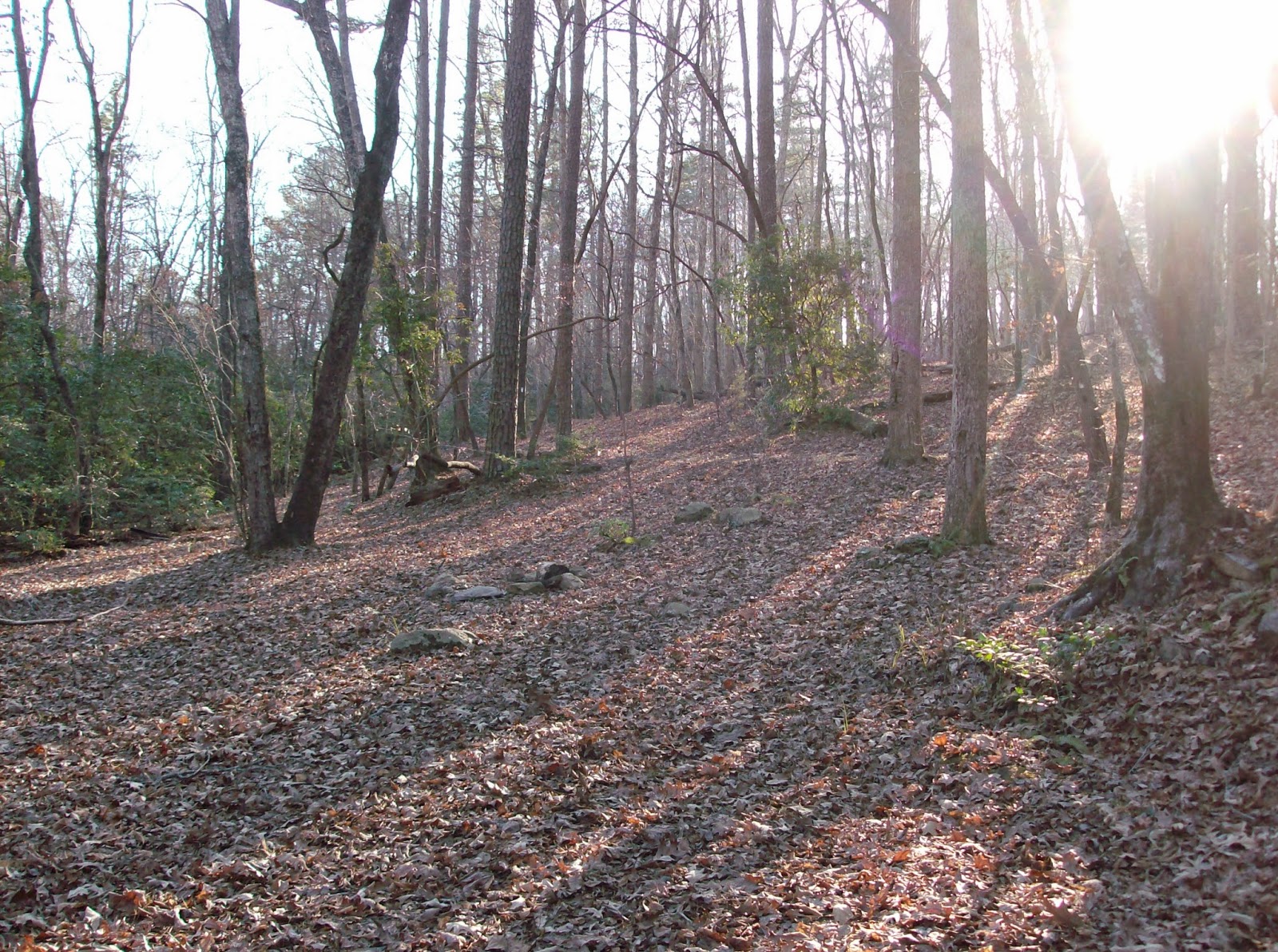 In this shot "signs of man" are more easily seen. A possible homesite or business, not far from the old wagon rut. 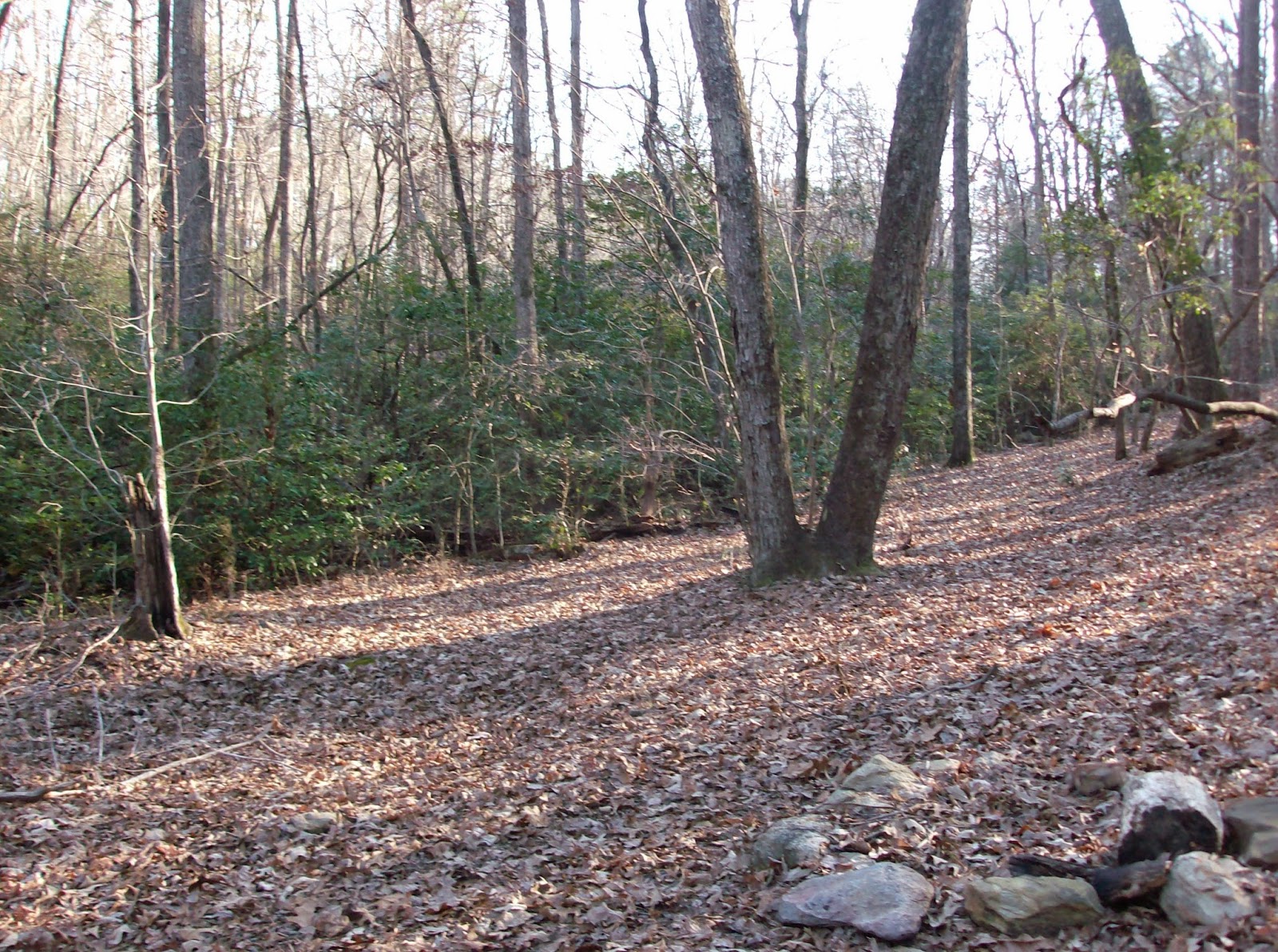 Another area that speaks of human habitation. Piles of rocks and obvious use by campers. But the area is leveled and shows signs of a building site. 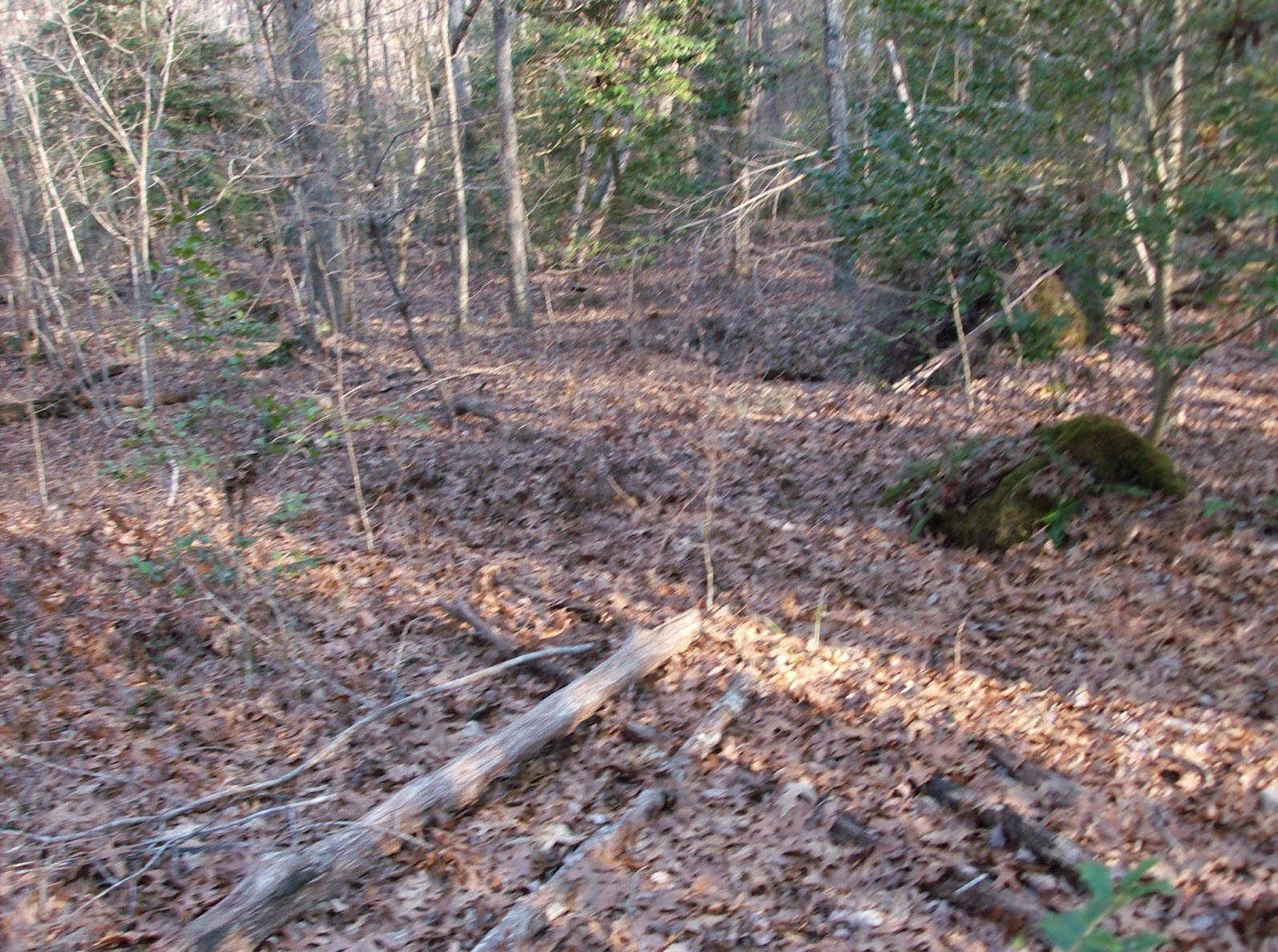 At some areas, campers have not relocated the moss covered piles of rocks that used to be chimneys or footings to a wooden structure. 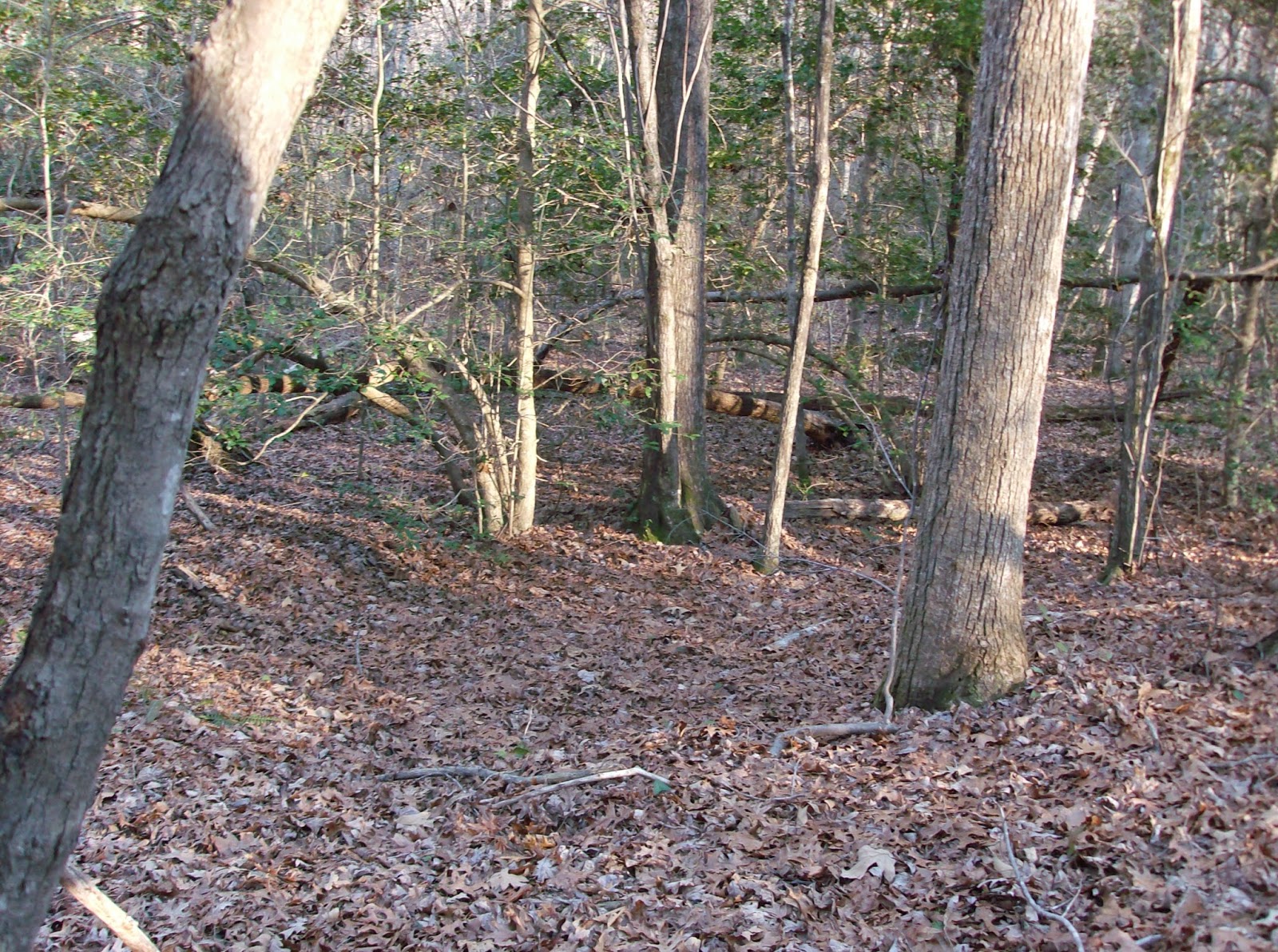 Here a narrower road veres off the "Main Road" and past several possible homesites. This is a very hilly area and most of the homeplaces were on leveled off spots and very near a creek. This one appears to have maybe been one of the created "gridded" streets as appears on the plat. 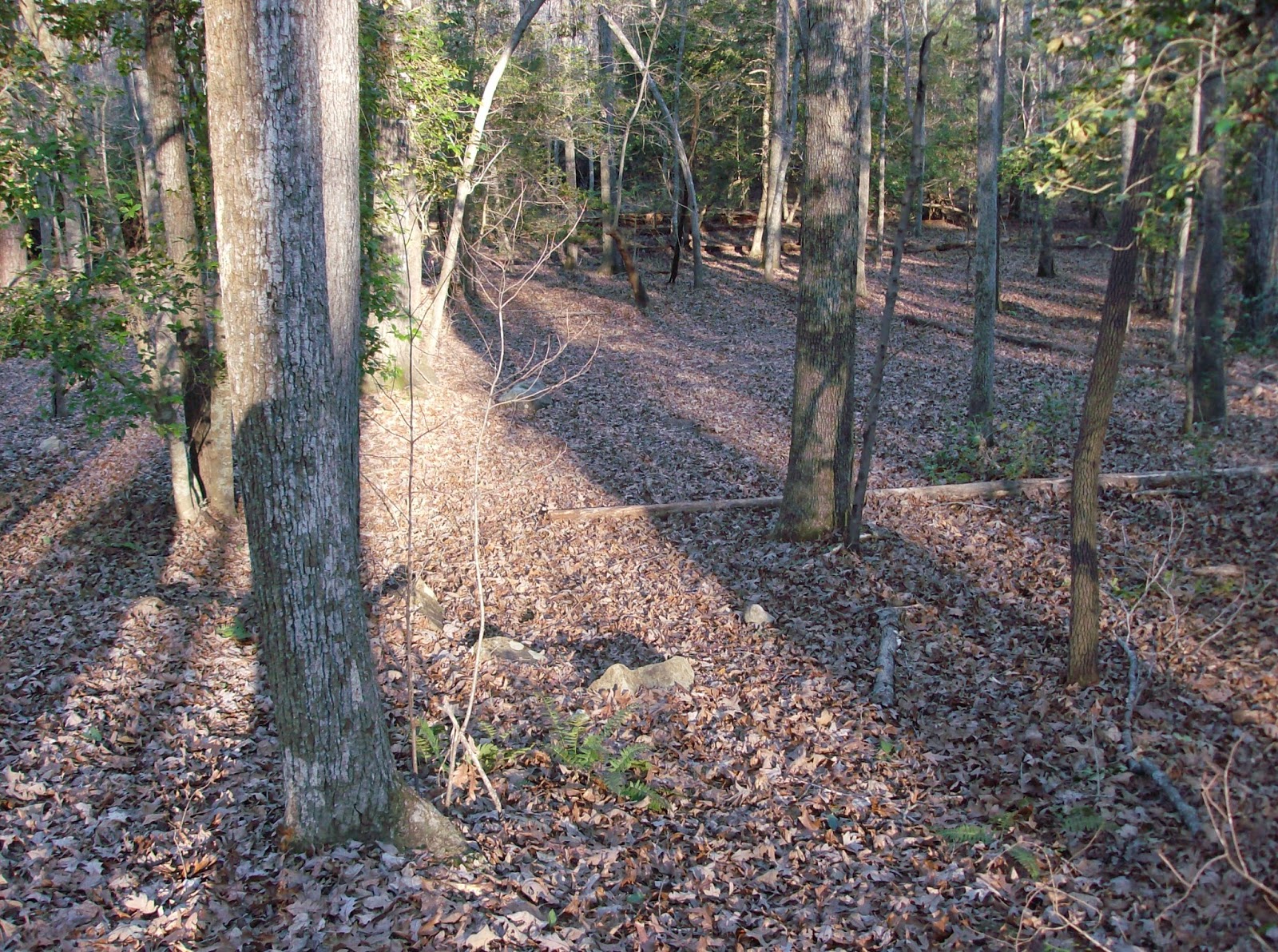 Another possible building location just 'down the street' from the above lane. 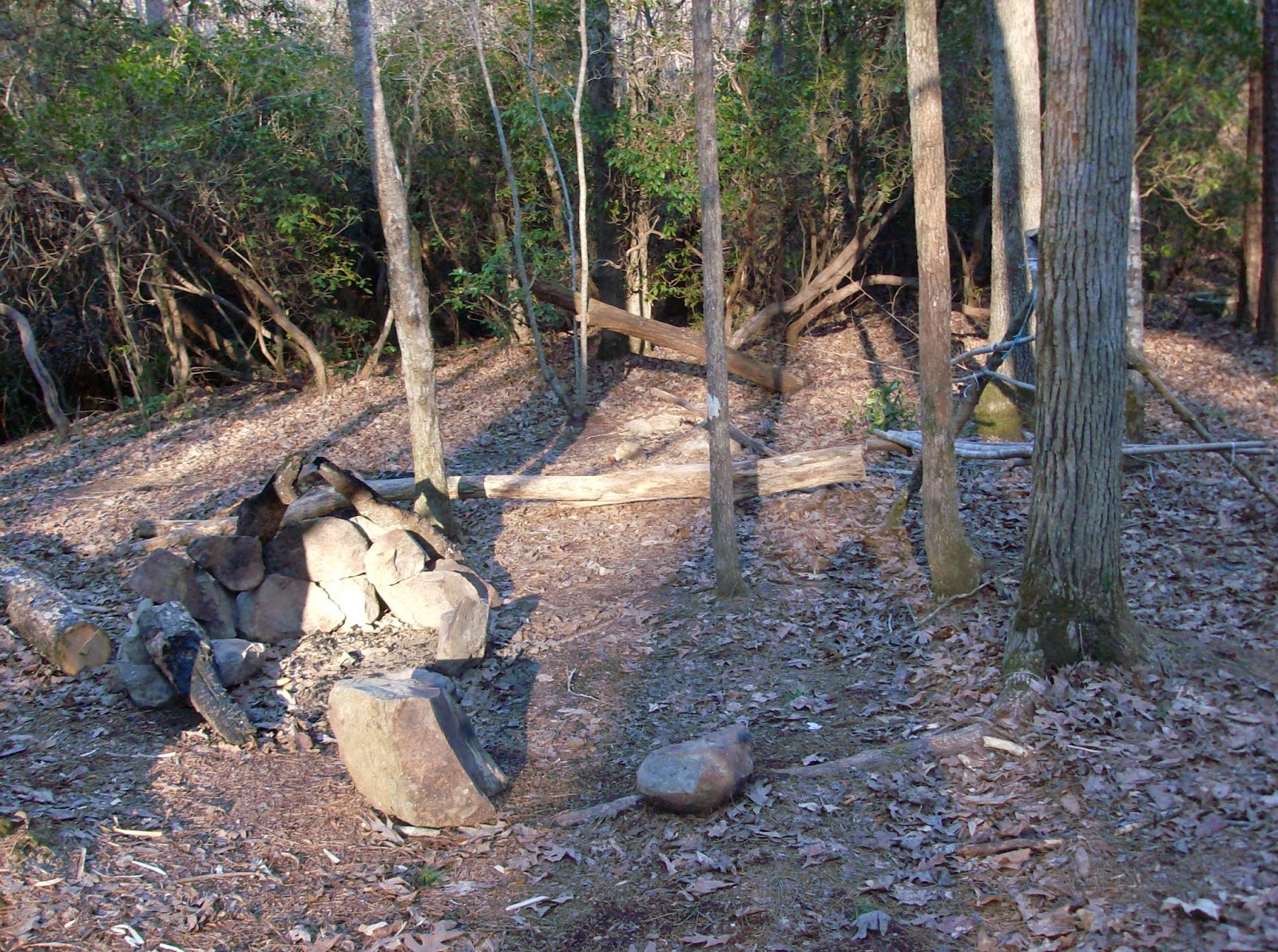 Again, campers have taken the remains of Lawrenceville to make campfires on top of old homesites. 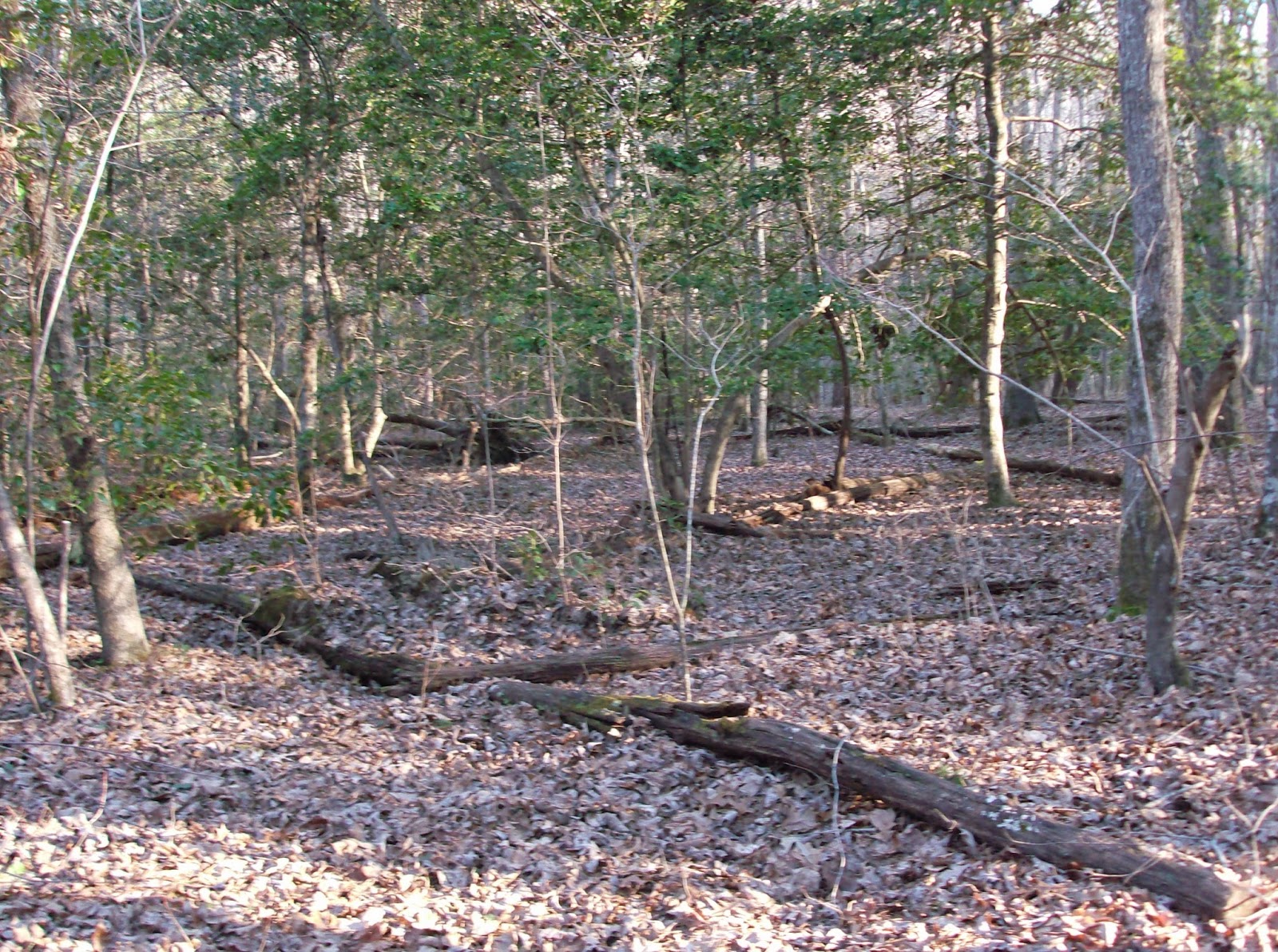 From this angle, looking toward the center of the photo, I hope the reader can envision the cabin that sat here. 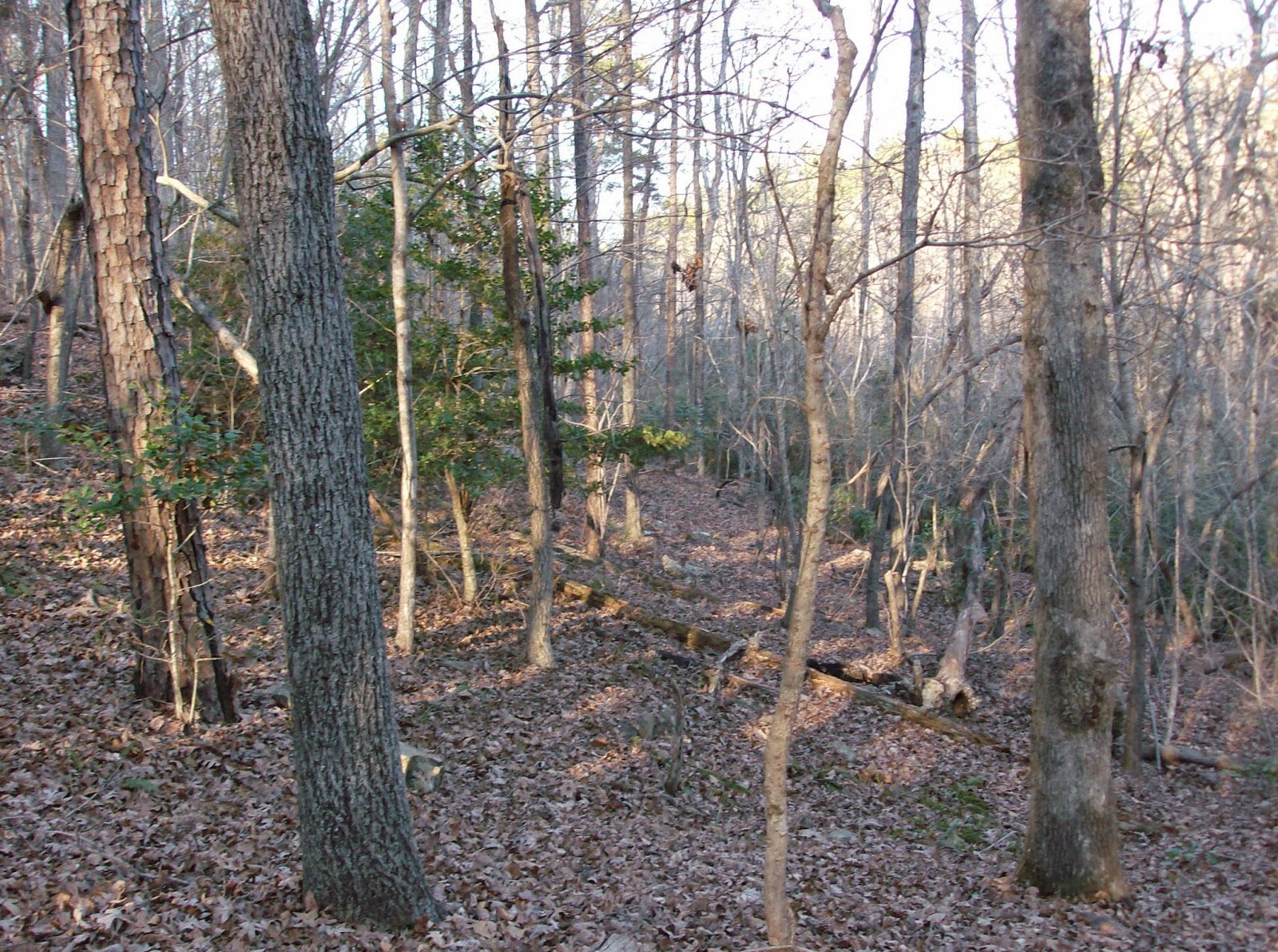 The ghosts of Lawrenceville and the old Morganton to Fayetteville road say goodbye in the twinkling of the setting sun, as the road leads into emptiness, forests and infinity.

One day soon, I hope to walk the entire trail, but on this day, we had constraints of responsibilities and the setting sun. Rangers have before taken groups on hiking tours of this beautiful and historic area. I hope they schedule another soon. I'll be there.

Posted by Jobs Children at 6:40 AM