The Joining of Mrs. Martha B.

Oftentimes, a bit of our heritage can be found in short blurbs in old books. Church histories make excellent references to our ancestors and offer invaluable insight into their way of life.

Rocky River Presbyterian Church is an old and well documented congregation located in Southwestern Cabarrus County, along the Rocky River, from which so much of my heritage sprang.

Several books of been written on it, and with mention of it, among the best and most thorough, one called "The Presbyterian Congregation on Rocky River". The author was Thomas Hugh Spence and it was published in 1954 by Rocky River Presbyterian Church of Concord, North Carolina.

The book in it's entirety is available online at this link :  https://archive.org/details/presbyteriancong00spen

through the Univeristy of North Carolina Chapel Hill library.

It includes over a paragraph on and an extensive review of the career and family of my 5th Great-Grandfather, Rev John McKemie Wilson. His middle name can be found spelled any number of ways, from McClema to MaKemie to McKamy and so forth. But it is not the reknowned Rev. Wilson that this post is on.

Instead, it's on a singular mention of an elderly and blind lady who had joined the church. That lady was my mysterious Fourth Great-Grandmother, Martha.

Now, I hesitate to give Martha's surname, even her married one, as I am not altogether positive what it was.

I have been researching it as "Byram", because the available information seemed to point in that direction. I also have only been able to find Martha in one census, the 1880 one, living with her daughter and son-in-law, Mary Louise and Frederick Fincher Starnes, my third Great-Grandparents.

The documentation I've found on the children of Mary Louise Starnes seemed to corroborate the information in the census that her maiden name is Byram, or something very close, as the spellings vary.

And now, I've found this mention of her in the Rocky River Presbyterian records.

"A special meeting of the session was held at the residence of Frederick Starnes in February of 1875, at which time Mrs. Martha Bryson, "a blind and aged  lady" was recieved into the membership of the Church on confession of her faith. " pages 113-114, The Presbyterian Congregation at Rocky River.

This was without any doubt, my Martha. First, at this time, Grandpa Finch was the only Fred Starnes living in that area, and he did live very near the church. Second, his wife and Martha's daughter, Mary Louise, is buried there, along with several of the children who died young. I am sure they were members of the church.

Third, the 1880 census also identifies Martha as blind and her 7 year old granddaughter, Georgia, who would die young, as having rheumatism.

I should be able to find Martha in an earlier census record, as the 1850, 1860, and 1870 census records all list women and children. By 1860, her daughter Mary Louise was married to F. F. and in 1850, we find a 14 year old girl, Mary L. Byrum, living with a 33 year old Elizabeth Byrom, a 70 year old Mary Byrom, and 28 year old laborer, Ephraim Starnes. Further research on Ephraim Starnes shows quite a bit of earlier interaction with a Willliam Byram, who was more than likely related to these 3 ladies. But no Martha, born around 1810. Was her name reallly Byram, as is shown in the census, or could it have been Bryson, as shown in the book?

On Mary L. , in the 1880 census, it reveals that she was born in North Carolina, as was her father, and verifies that her mother was born in South Carolina.

The Death Certificate of Frederick Lafayette Starnes, known as "Fate", and shown as a 5 year old in the above census record, gives his mothers maiden name as "Brooms". Of course, the informant was son Silas Grier Starnes, who may not have been completely familiar with his Grandmother's maiden name, just the sound of it, and he also gave both of his father's parents as having been born in South Carolina. 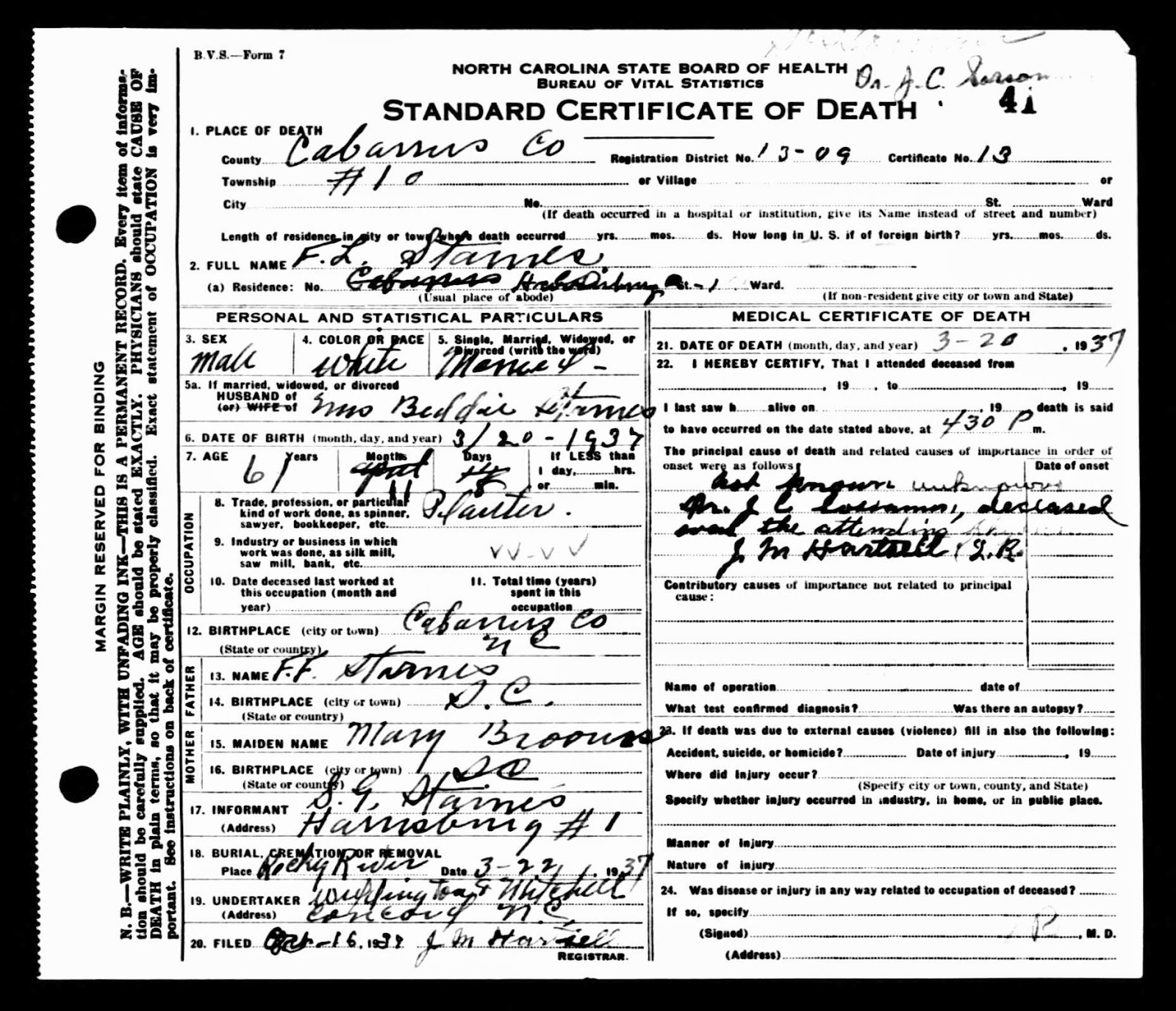 In contrast, the death certificate of daughter Della (or Delphia) A. Starnes McAnnulty, gives her parents as "Fred Starnes" and "Mary Barren", the informant being her daughter, Stella.  This 1948 death certificate is in typed print, so there is no mistaking the lettering and granddaughter Stella gives the birthplace of her grandparents as "North Carolina". 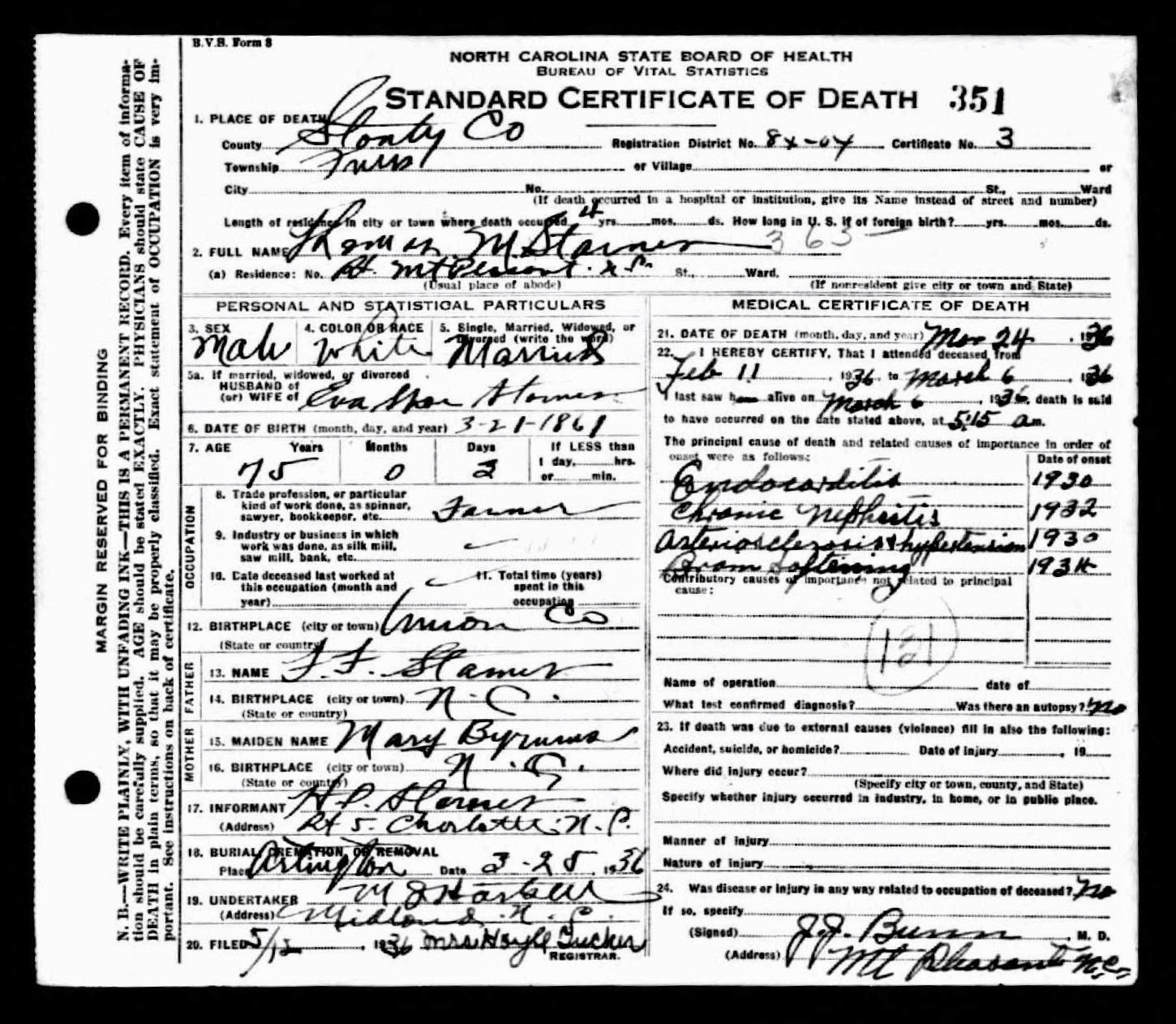 The 1936 Death Certificate of their brother, Thomas Mellon Starnes, gives his mother's maiden name as "Mary Byrums" and birthplaces for both parents being in "N. C." with the informant being his son Herbert Phillips Starnes. 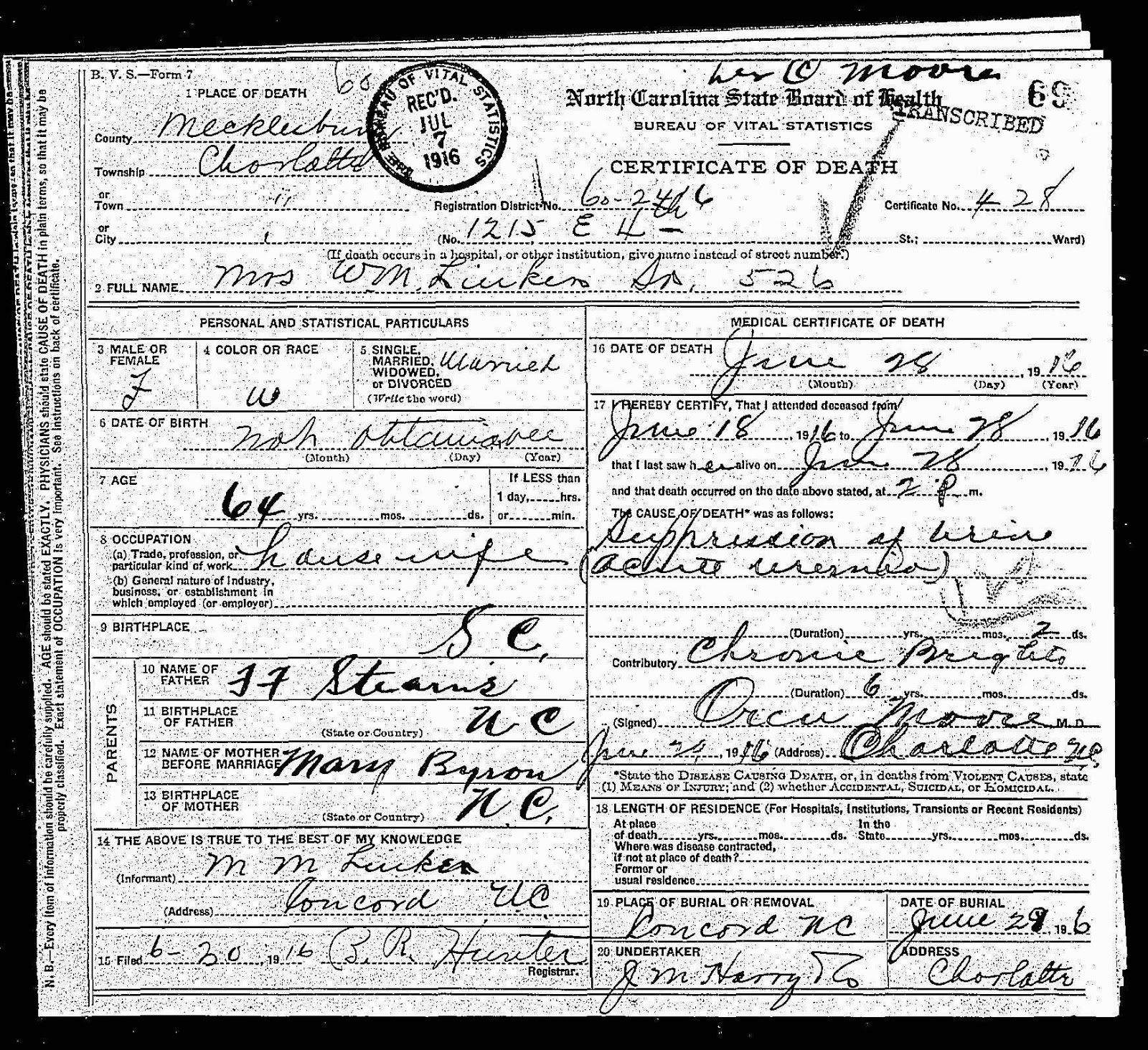 Oddly, although my Second G-Grandmother Leavy, lived the longest other than one brother, passing in 1939, I've yet to locate a death certificate for her. Either the year is wrong on her tombstone, her name was horribly mangled on the certificate, or she just slipped by without one.

Also missing is daughter Daisy L Starnes who married Joseph M. Herrin. I can not locate her past her 1893 marriage license, but her story does not end there.