The search for Alcey West Boggan


I recently posted the very complementary obituary composed by "A. J. G.", and published in the April 25, 1865 edition of The Fayetteville Observer, out of Cumberland County, North Carolina, for Hampton Rhodes West.

The End of Another Remarkable Hampton

He is mentioned well in his father's will, as seen below.


Given this will, I have been attempting to research and generally make heads or tails of the siblings of Hampton R West. For the most part, it has been going fairly easily, without a great deal of twists and turns or brick walls. Until I hit the name of his sister, "Alcey" (or also seen as Alsie) West Boggan.

I will soon post on the other siblings of H. R. West, but for now, I am absorbed with Alsie.

I always look to see what other research has been done on individuals I find difficult to find. And there has been in the past, a deal of involved research on the West family. One individual in particular, who has been copied by later descendants, had made the following resolve on Alsie. They had determined that she was the Adeline that married a George D Boggan, who began in Anson and later migrated to Mississippi.


Above, the family is living in Anson, and below, the same family in Mississippi.

The problem with this theory, although Adeline A. Boggan is near the same age as Alsie Boggan, is that following the younger children of George D. and Adeline Boggan on out, is that they have records in agreement, that the maiden name of their mother is Adeline A. Alsobrooks, who was born in South Carolina.

So, in discovering that this information was incorrect, and realizing that the early researchers did not have the tools and amazing technology available to us today, to have records readily at our fingertips through online sights like Familysearch.org, Ancestry.com, and Fold3.com.

Another amazing tool I use is Newspapers.com, which has an admirable database of old newspapers on archive from all over the nation. They even have archives of the small towns of Albemarle, North Carolina and Troy, North Carolina, although not complete collections. And their collections are growing all the time. For serious researchers, it's well worth the small investment.

It was through this site that I found the following gem, which gave the name of Alsey West Boggan's husband. 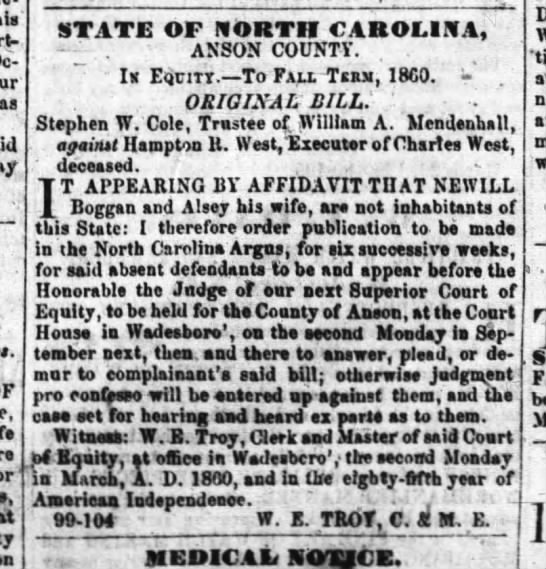 So, this tells me Alsey West and her husband "Newell" lived out of state.

Another hint was in the 1870 census, that shows Alsey West Boggan, complete with transcribers error, living in the home of her nephew and son of Hampton Rhodes West, Charles W. West II, along with her unmarried sister, Mary aka "Polly" West.


In fact, this is the only census record I've been able to find for Alsey, and it gives her year of birth.

So the next step was to try to find "Newell Boggan", and I did.

He was incorrectly listed as "Hewitt" Boggan in the 1840 census of Butler County, Alabama. In other Butler County records, he is shown as "Newitt" Bogan or Newell Boggan. He suffered greatly on variations of both names.

Although I haven't found him in the 1850 Federal census of Butler County, he appears in several Alabama State Census records.


And in Non-census Agricultural Schedules:

And in the 1855 State Census. He has now moved to Macon County, Alabama.

Macon County, Alabama is now a very different place than it was in 1855, and the Boggan family is particially responsible.

He is always seen near family and was the son of a Jonathan Boggan. What cinches the fact that "Newell" and "Newitt" is the same guy, are the records attached to his father, Jonathan.

A history of the Boggan family provides verified links.


Below is the will of Jonanthan Boggan dated November 25, 1857. In this, he names his son as Newitt, instead of Newill, so I am going with that spelling. This also shows that Newitt was alive in 1857, but likely deceased before his wife moved back to North Carolina by 1870 to live with her nephew. There is no indication they had any children, but I am sure there is more to discover about Newitt and Alsey. And who ran the Boggan and West Distillery in Butler County, Alabama in 1880.

Posted by Jobs Children at 7:45 AM