The Early Roads of Albemarle

I have a fascination for old maps. Something intrigues me. I love to look at them and try to determine where exactly the roads and areas led pertaining to the modern landscape.


In 1841, when the county of Montgomery in North Carolina had been severed by the Yadkin/PeeDee River in order to form the new County of Stanly, a group of men got together, including my Davis ancestors, to determine the placement of the County Seat, a center for justice, a place to build a Courthouse and Jail.

The place was eventually decided to be 50 acres of part of the Hearne lands, "within 8 miles of Eben Hearne" and taking into account the dower of his mother Nancy, and the shares of minor "infant" heirs Mary Frances Hearne, who was unmarried and still at home and of her nephew Alexander, whose mother had passed away and who was in the custody and guardianship of his grandmother Nancy. 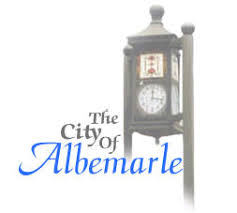 And it was to be called "Albemarle".

The description of the site in 1841 was as follows, "the situation is central and healthy, being on a high and dry ridge, with fine and suitable soil for a county town, having a beautiful grove of forest trees, large oaks + hickories......having advantage of good public roads leading to it, the road from Fayetteville to Morganton, and the road from Cheraw to Salisbury pass directly by it, and two other roads unite with them at the spot."


So Albemarle, before she was Albemarle, was an intersection of the Fayetteville to Morganton road, which I believe was at least in its eastward streach, the reasonable trajectory of East Main Street leading to the Troy Road, or 24/27 and that the Salisbury to Cheraw road was pretty much the same path that Highway 52 runs today, off a little as "The Old Salisbury Road" from Albemarle to Richfield runs parallel to 52 and is closer to the original path in all likelihood.

On this old map, the Cheraw to Salisbury Road was probably the one through Centre (now Norwood) to the South and through Narrows (Richfield/Misenheimer) to the North. The Fayetteville to Morganton Road was probably the one leading east from Albemarle to Lawrenceville (now in the Uwharrie Forest) and to Mount Pleasant and Concord to the West.  The other southbound road out of Albemarle looks to have led to Cottonville and then down to the Ford, with one westward from there. But I'd like to know the other roads they were talking about. There is one from "Narrows" which follows the river all the way down into Anson, with another that crosses at what was probably a Ferry near present day Badin, maybe Lowders Ferry or Kirks. The road might follow somewhat, current 741, then picking up along Valley drive and the now nonexistant road that led from Morrow Mountain to Rest, which is now River Haven and maybe following close to "Indian Mound Road" or "Greentop", down to Randalls and old Allenton, below Norwood.

If anyone has any more information on these old roads, please contact me.