A Quick View of the Holdens

Nancy Holden married Ephraim Starnes and in this action gave collateral evidence to solve the mystery of the following 1850 census record:


The 14 year old Mary L Byrom (or Byrum or Byram) in this census is my third great-grandmother who married Frederick Fincher Starnes. Ephraim Starnes is given in this record as Farm Labor. The mysteries within is who Elizabeth 33, and Mary 70, is to Mary Louise Byram Starnes. It appears that Elizabeth could be her mother, (19 year age difference not out of the question) and Mary, perhaps her grandmother, the mother-in-law of Elizabeth. Or perhaps Elizabeth is her older sister, or her aunt. And is there a relation between Ephraim Starnes and her future husband, Frederick Fincher Starnes?

Nine years after this census, Ephraim Starnes marries Nancy Holden and by the 1860 census, with the exception of  Mary L. Byram, the other members of the household are not to be found. Ephraim deserves a post of his own, and this one is concerning Nancy, his wife.

Nancy's first appearance in the census is in this 1850 census.

Among the neighbors of this Holden family were Phillip and Kendrick Richardson, Jacob and Charlie Broom, a 23 year old David Starnes, a 45 year old Mary Starnes and not too far away, a 41 year old Frederick Holden. But the family listed just under her name was this one:
This is the family of my third Great-Grandfather, Frederick Starnes, with his second wife, Elizabeth Thompson Starnes, minus his youngest daughter, Jane or Jincy, who is not yet born, his older son Frederick Fincher Starnes, and any other older children who have already left the nest.

Sarah Holden was obviously not the mother of Nancy Holden. And thankfully, one day in 1848, Sarah had went to court and told us who she and the other members of this household were. 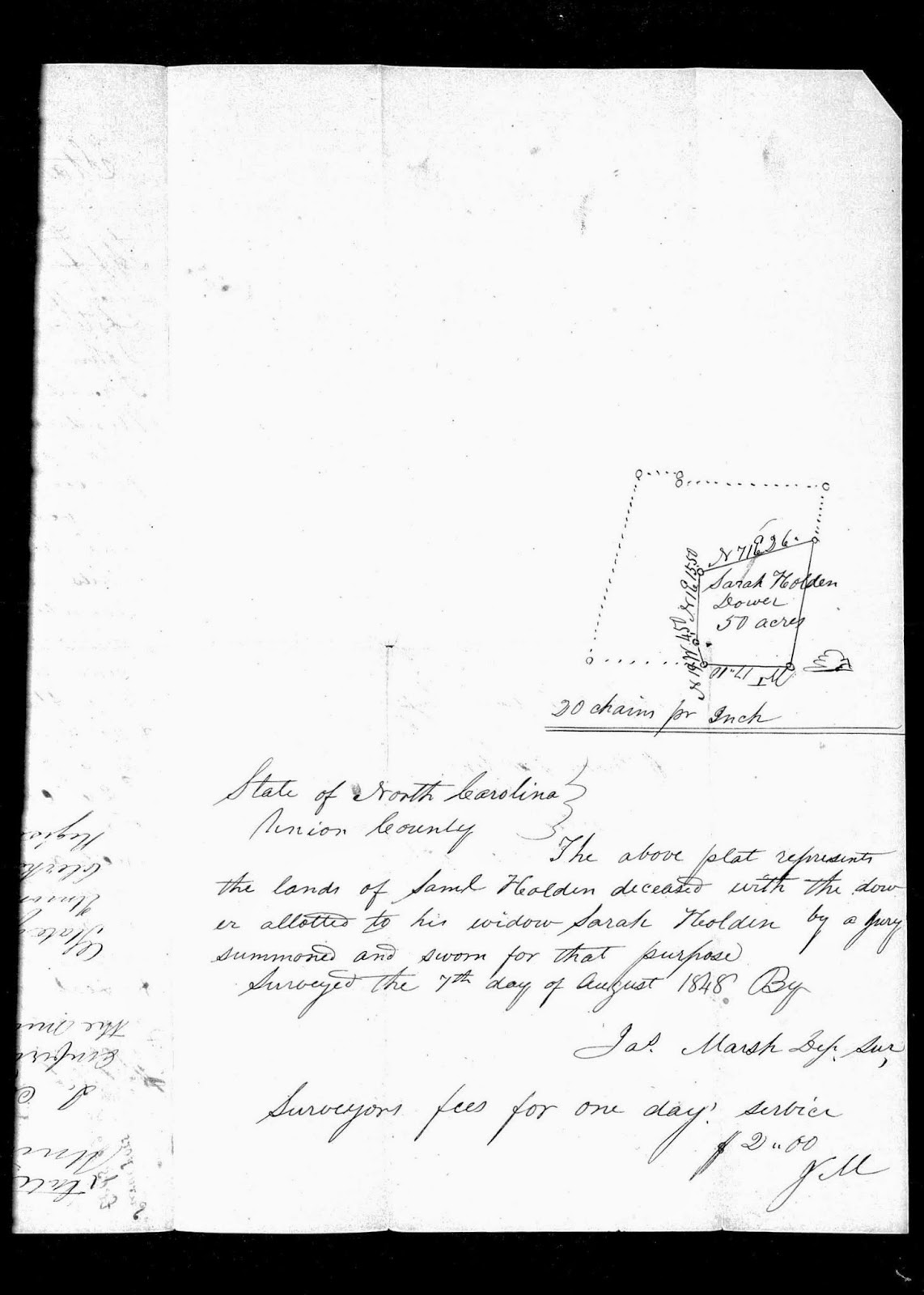 This page of the document shows the area the selected citizens designated for Sarah Holden's dower.

The document it derives from is the 1848 estate records of Samuel Holden. It begins;"July Term, 1848 Union County, North Carolina.

The petition of Sarah Holden, against Eliza, heir of Alexander Holden, Henry, Frederick, Lilly, Lizzie, Holly, Solomon and Nancy Holden, all of full age, and Emmaline, Rachel, Sampson, Sallie, Rebecca and Polly,all of full age, except Eliza, Nancy, Emeline, Rachel, Sampson, Sally, Rebecca, and Polly,  humbly complaining...Your petitioner showeth your worship that Samuel Holden, late of the County aforesaid departed this life about the 6 day of May, 1818 intestate leaving your petitioner his widow and relief unprovided for. That the said Samuel Holden died ....following tract of land...about 200 acres adjoining the lands of Hiram Broom, WM BYRAM, Phillip Richardson, Jacob Starnes and others...title papers to said lands are in the hands of Sarah Holden and ready to be produced when required. Ye petitioner further states that the above named defendants are the children of Samuel Holden and that they are of full age except Eliza, Emeline, Rachel, Sampson, Sally, Rebecca, Polly and Nancy, who are all minors under the age of 21...the petitioner further prays that your worships will appoint some suitable and descreet (?) persons as guardian to defend the rights of the said infant heirs, Eliza, Emeline, and Rachel in this suit and that a writ of dower may issue to the sheriff...June 1848.  Samuel  H Walkup, attorney.

So Samuel Holden was the father of Nancy Holden, who married Ephraim Starnes. They lived next to not only a William Byram, but Jacob Starnes and by 1850, next to Frederick Starnes, Sr.

The maiden names of his wives are unknown.
Union County did not become in existence until 1842, before that, its citizens were listed in Mecklenburg.
Samuel Holden fathered at least 16 children. His oldest son, Frederick, was mentioned in the will of Samuels father, Frederick Holden, or Holding. Samuel served in the War of 1812 and was found on lists of soldiers that mustered in Mecklenburg County. The family began in Hillsborough District, Wake County, however.

Frederick Holden, father of Samuel, died about 1815 in Mecklenburg County. He left a will. His wife was named Elizabeth and he named the following children: Ann, Debbie, Besty, Rebecca, Sally and Samuel and his grandson and namesake, Frederick. Frederick remained near his father's home in Union County.

Frederick Holden Sr. shows up in 1790 census in Hillsborough District, Wake County and remains there through 1800. By 1810, the family has moved to Mecklenburg.

As Frederick, son of Samuel was his grandfather's namesake, so was Samuel. He was also named for Samuel, the father of his father, Frederick.

Samuel the first was from Wake County, he married Martha Burch and then later, Holly Young.

He too, had migrated to Mecklenburg County, North Carolina. However, the trip must have been too much for the old man, born around 1740. He passed away in Mecklenburg, in 1800, shortly after the census. He left a will and named his children: Arthur, Samuel, Jr. , Frederick, and John. Later, a Mathew appears, not mentioned in the will,

So, the Holden line in NC can be traced to Samuel 1, then to Frederick 1 , then to Samuel II, who died in 1848 and was the father of Nancy, and left a large family, begining with son Frederick II.

Posted by Jobs Children at 9:19 AM