The Descendants of Ephraim Starnes

In my previous post, titled "Ephraim Starnes", my focus was his connection to a William Byram, who might be my ancestor, but I neglected to explain much about the descendants of Ephraim Starnes, for the benefit of those who are descended from him.

To have been someone who perished in the Civil War, Ephraim really does not have that many descendants, not as many as others of his era. Ephraim Starnes was born about 1822 in the section of Mecklenburg County, NC, that became Union County in 1842. Family researchers have him pegged as being the son of Charles and Elizabeth Starnes, however, this is something I've not looked into, so I can't testify as to it's authenticity.

Indeed, the Rev. Charles Starnes was the ministered who performed the ceremony to marry Ephraim Starnes and his wife Nancy E. Holden, daughter of Samuel Holden.

Ephraim Starnes passed away on January 12, 1865 at Elmira Prison Camp in New York. The tale of his widow and fatherless children echo of many of the times. 
Above information from "Find-a-Grave.com"

Born 1855 and shows up first in the 1860 census with his parents and younger brother.

The family is not to be found in the 1870 census and in 1871, Sixteen year old "Bob" marries Hannah Melton, age 18, daughter of John and Emmaline Montgomery Melton.
The 1880 census show him living in his mother's household with his wife, firstborn daughter, Mary and his two younger sisters, Susan and Sarah.

By 1900, the family has relocated to Gill's Creek in Lancaster County, South Carolina. In additon to Bob and Hannah, chidren Thomas, Maggie, Blanch, and Bob Lee Starnes, along with oldest daughter Mary A. and her husband Joe Knight. Andrew Bowers is a boarder.

In 1910, Bob and Hannah have Lee and Lillian left at home, along with oldest daughter, Mary Almetta, husband Joe and 2 sons.
By 1920, the family had moved from Gill's Creek in Lancaster County, SC to Rock Hill in York County, SC. Bob is working in the card room of a Cotton Mill and only Lillian is left at home.
The 1930 census was Bob's last. The family has returned to Gill's Creek by 1935  and Bob's profession is listed as "farmer" and his family as farm labor. His son-in-law, John Carpenter and daughter Lillian are in the household. According to the records, Bob died in Rock Hill, York County, NC and was taken back to Gill's Creek to be buried. He died on March 23, 1936 at the age of 86.

Born in 1857 and first shows up in the 1860 census with his parents and older brother. "Or" is a transcription error. The actual document shows "Dr". Doctor was a common Christian or first name in the later half of the 19th century as children were named for the doctor who aided in their delivery, oftentimes saving their lives, and sometimes with little or no compensation. Not certain who Doctor Franklin, the original, may have been.

He married Margaret Louise Plyler in 1880 and shows up with her in the 1880 census. Maggie was the daughter of Doctor Henderson "Doc B" Plyer and Mary Isabella Caskey Plyler.
In 1910, the family is living in Waxhaw, Lancaster County, SC.
By 1920, Maggie has passed and D. F. Starnes is living with his daughter.

D. F. Starnes died on October 25, 1925 in Monroe, NC, but made his home and raised his family in the Van Wyke community, Lancaster County, SC.

He and Maggie raised 7 children:

She first shows up in the 1880 census with her mother, sister Susan, brother John R. and his young family.

The 1910 census leads to a bit of confusion. Son John Robert Craig is listed twice, once ahead of his brothers, then again, ahead of his wife and daughter.

By 1920, George and Denie had an empty nest.
By 1930, Sarah Ardene was living in the home of her son Hazel. Hazel was a very common name for sons amongst this family. I have not tracked the source of the first Hazel. There is a Hazeltine Starnes in the Starnes family tree, born on 1858 in Rowan County. Perhaps there is a connection to an earlier male Hazel or Hazeltine Starnes in this family line.

Susan or "Susie" was the most difficult of the family to trace. She was born on April 12, 1864. The dates of birth of both Starnes daughters are a bit of a mystery. According to the military records of Ephraim Starnes, he was imprisoned a month after the birth of Susie, having enlisted on September 24, 1863, he left Nancy just a few months pregnant with Susan Jane. Her younger sister, Sarah Ardene Starnes was born 11 months after Ephraims death.

Her first appearance was in the 1880 census, listed above in her siblings profiles as a teenager.

By 1900, she has had two children, her only two, and is living with her mother Nancy, the last census that Nancy appears in. A mystery couple are also listed in the home, possibly boarders.
The 1910 Starnes is nearly wholly incorrect, but with research, I figured it out.

Hoy is her son Hoyt Edgar Starnes, Nettie is his wife Jeanetta and Pearl is their oldest daughter and this group were Starnse. David is not a son, but a son-in-law and his last name was Deese. Nannie is daughter Nannie Helen Starnes and their oldest son J D Dees. J D became and important tool in linking this family altogether.

I don't believe I would have been able to find either Susan or Hoyt in the 1920 census if it were not for J D Dees and his sisters. In finding him, and his two younger sisters, I looked up and noticed that the names of the children in the "Thomas" family matched the names of their first cousins, their Uncle Hoyt Edgar Starnes, and his wife Nettie. And certainly, their mother was named Nettie. Then, J D and his sibling were listed as grandchildren of "Susie Thomas"...could it be Susan? So, I went directly to the original document. And there it was, it said "Starnes" and "Otis" was actually "Hoyt". The census taker had overlined the "T" and "A" in Starnes, and nearly obliterated the "S". The only clear part of the name was the "nes" at the end, and in the barely legible script, the transcriber must have thought he or she saw "Thomas". The transcribers are not from the area and thus, not familiar with the common names of the locality. It's always a benefit to help correct these errors if you are sifting through the scanned originals and know the local family names are incorrect, like "Belt" for "Belk" or "Stames" for "Starnes". It doesn't change them completely, it just gives the next researcher another option and if they are searching for the name in its correct spelling, it will pop up as a possibiltiy.

So, in 1920, Susan J Starnes is living in the community of Cane Creek on Midway Road. She is listed as a widow despite having never married. This must be confusing to those trying to climb up the family tree. Families often bent the truth in order to save face in those days. The truth is that nowhere are the names of her children's father or father listed in documents. She can read and write and she is taking in boarders, as well as raising her daughters 3 children. Hoyt and his wife Nettie are working in the Cotton Mill. Their children Pearl, Foster and Louise, along with his sister Nannie Helen's two older children, J D and Maybelle, are attending school. Margie is only 3 and Lonnie only a year old, and the youngest Deese, Helen, only 2.

Of the boarders, Emil Bullman is a Carpenter, while his wife does not work. Dexter Rhodes is a Contractor, building homes, and Ada Green works in the cotton mill.

In fact, nearly the entirety of Ephraim Starnes descendant were Cotton Mill workers between the late 1800's and the 1940's. This industry sustained them, and in the case of many of them, may also have shorten their lives.

Cane Creek was in and about the city of Lancaster and Midway dead south of it.

Susan Jane Starnes would not live long past this last census. She died on July 12, 1924 of pulminary TB. Her son, H. E. Starnes was the informant, and had the names of his grandparents correct. She was 60 years, 7 months and 10 days old. Bass Furniture Company was the undertaker. It was not unusual for those who built househole furniture to also build caskets in those days, and they went all the way into undertaking at the same time. 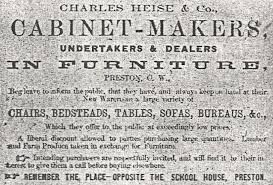 The above is just a few examples of this trade that would be considered bizarre today.

His 1918 Draft Registration shows him as being Short in stature, of medium build, with dark hair and dark eyes, having a wife, 4 children and a mother in his care.

Hoyt and Nettie had the following children: 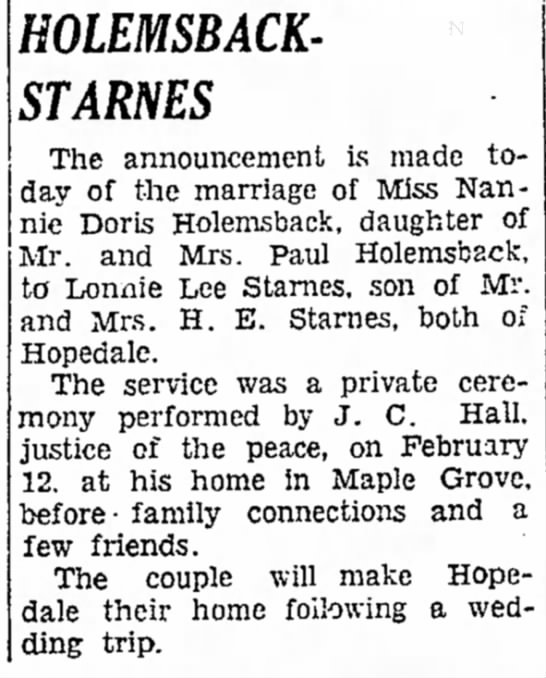 Hoyt Edgar Starnes relocated to Burlington in Alamance County, NC and raised his family there. He passed away on January 11, 1961 at the age of 73. His death certificate gives his father as H. E. Starnes and his mother as Susie Cole. The informant was daughter, Mrs. T. C. Dixon (Margie). This was incorrect, Susan was never married and never a Cole, and there was never a Hoyt E. Starnes, Sr. However, could this have been a hint to the truth? Was Hoyt's father a Cole? Was H. E. his fathers initials? There was a Cole family in the area at the time. 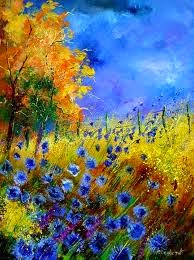 I skipped the 1930 census for one reason, to backtrack. Hoyt E. Starnes raised not only his own 6 children, but his sisters 3 children. What happened to Nannie Helen Starnes?

Nannie Helen Starnes died on October 26, 1918 at the age of 23 of pnuemonia and influenza. Those two diseases were terribly deadly at that time. She was a cotton mill worker and her mother was given as Susie Starnes and her father as unknown. The informant was her cousin Hazel Craig. Nannie Helen Starnes married an orphan, David L. Deese. David Deese turned his 3 children over to his wife's family and went on about his life. He remarried, likely twice, and was a Car repairer. Born in Chester, he returned to Chester and died in 1937 of TB.

The three children of Nannie and David were:

1) James D Deese 1908-1939, never married. He died a young man of ulcerated colitis, and had to be hospitalized at the Sanitorium in Black Mountain, NC. Also a textile worker, he was only 31 years old.

Posted by Jobs Children at 7:17 AM