The Estate of Joseph Jordan 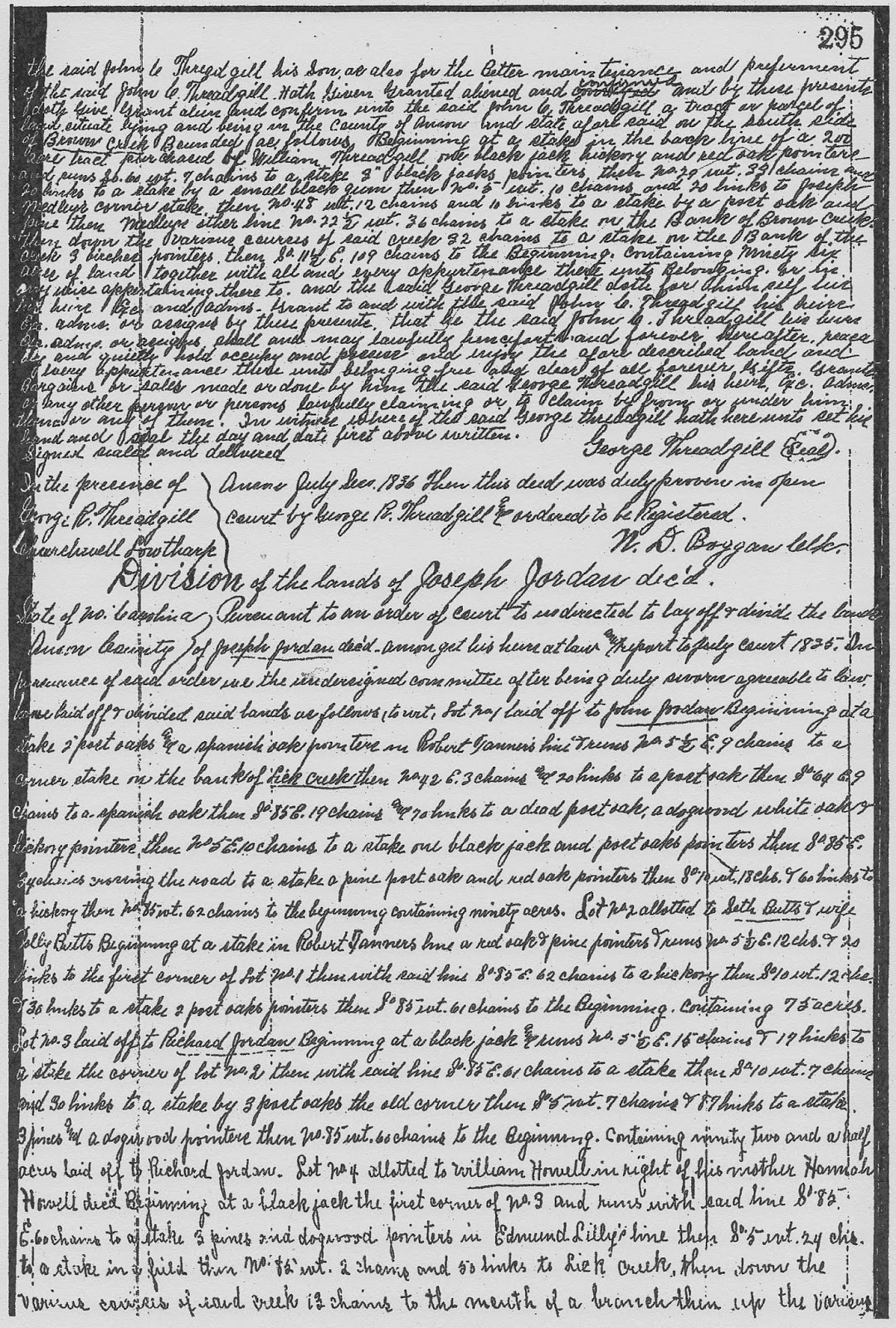 In the 1800 census of Anson County, there were 3 listings for Joseph Jordan. One is clearly listed for Joseph Jordan, Jr. I have still to try to discern any possibly relation between the other two.

Joseph Jordan was a descendant of a Richard Jordan who had settled around the Isle of Wight and Surry counties in Virginia.

I fully believe it is through this line and group of families who migrated into Anson County that Richard Howell, the first husband of my 4th Great-Grandmother, Sarah Elizabeth Winfield Howell Davis, and his brother, Jordan Howell are descended. Richard had a son named Jordan and Jordan had a son named Richard. The two names crisscross through the family line.
Joseph Jordan Number One has a household of 6 members. One male and one female over 45. Probably he and his wife. They have 4 children, one son and one daughter between 10 and 15 and one son and one daughter under 10.

Joseph Jordan Number Two had a much larger household of 13 people. It shows one Male over 45 and one Female over 45. This may have been a married couple. There were two males and two females between 26 and 44. This could have been children, children and their spouses combinations, or employees or a combination of children and employees. There were 2 females aged 16 to 25. These were most likely daughters, but possibly not. The two males under 10 and 3 females under 10 could be children, but probably grandchildren, as there are no individuals listed in the 10 to 15 age gap, the continuity is lost.

The third Joseph Jordan is designated as a "Junior", most likely a son of one of the older Jordans, but not necessarily so. He also has a family of four, One adult male and one adult female between the ages of 26 and 44, one boy 10 to 14, one boy under 10 and 2 females under 10.

There was no 1810 census available. By 1820, only one Joseph Jordan remained. Most likely, this was Joseph Jordan, Jr.

There was a thriving family group of Jordans in Montgomery County, NC as well, that was a part of Anson until 1799. It was highly likely that they were all related.

The above document is from July of 1835. Joseph Jordan did not leave a will, therefore, his property was divided among his surviving heirs.
Names and areas mentioned in the division are: John Jordan, Robert Tanner's line, bank of Lick Creek, lot 2 allotted to Seth Butts and wife Polly Butts, Robert Tanner's line, Richard Jordan, William Howell in right of his mother, Hannah Howell, Edmund Lilly's line. Given under our respective hands and seals this 6th day of May, 1835.

Edmund Lilly is the key to where this property was located, as his holdings have been solidly researched and located.

The property was where modern Anson, Montgomery and Stanly counties all come together. As Peter Winfield, Sarah Howell's father, settled on the Rocky River (both Stanly and Anson sides), near the fork of the Rocky and PeeDee, and this same area was not far from the known lands of Edmund Lilly, there is no doubt this set of Jordans and Howells were mostly likely the family of Richard Howell and his brother Jordan. Jordan married Martha Randall (of the Randalls Church Randalls). They had sons Richard, John Randall and James G. Howell.

Hardy Creek was historically known as "Ugly Creek" and the land on the Stanly County side of the Rocky River in the "boot" between Jacks Branch and Ugly Creek was where the lands of Job Davis, Sarah's second husband lived. Some of it was a grant to Job, other parts of it were Sarah's portion of her father Peter Winfield's lands, other parts, still Job purchased of neighbors.

While no direct evidence may ever be found due to Courthouse fires and documents being lost to time. Circumstantial evidence and commonality of locale can often point to a reasonable assumption of familial connections. And that may be as good as it ever gets.

Posted by Jobs Children at 8:12 AM