The Dower of Motlina Starnes 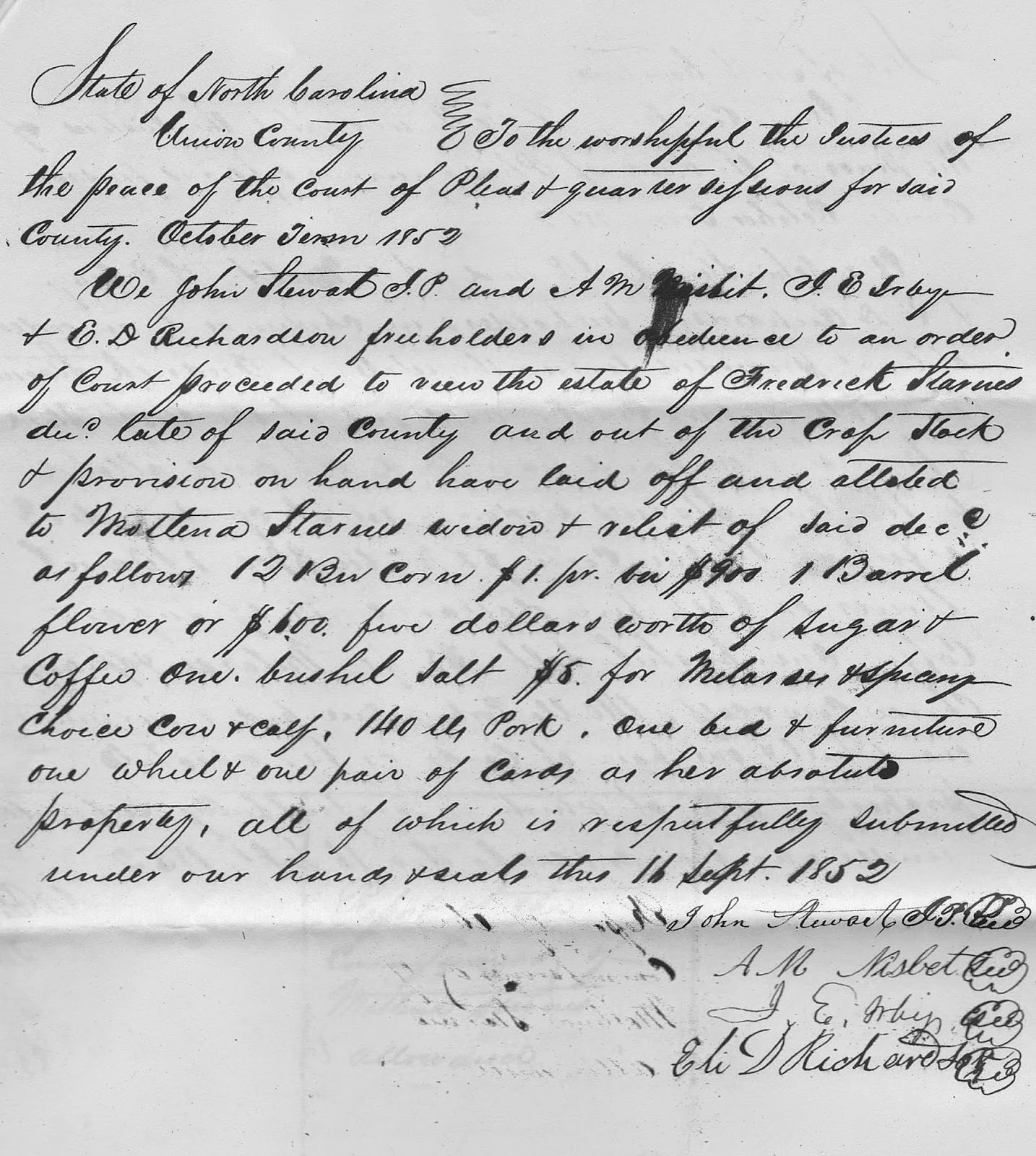 This particular Frederick Starnes was born probably in Mecklenburg County, possibly in the section that became Cabarrus, in about 1772. He was the son of Captain John Starnes, a Revolutionary War soldier, who is honored with a monument at St. John's Lutheran Church, near Mount Pleasant, in Cabarrus County, North Carolina. St. John's has a long and very German history.


The below is their actual marriage bond. Motlina appears in only one census, the 1850 census, as this is the first one to name women, children and those other than Heads of Household. It was also her and her husband's last census, due to their advanced age.


She was the daughter of  Michael Cline and Anna Catherine Schuffert Cline. Michael Cline was born in May, 1725 in Alace, Germany. His wife, Anna Catherine was from Lorraine, Germany. They were married on Beiber Creek, Rockland Township, Berks County, Pennsylvania in 1750. The couple made their way to the ColdWater area of Cabarrus County, North Carolina and are buried at Coldwater Lutheran Church. Frederick Starnes and Motlina Cline Starnes had 10 to 12 children. This is still being researched. They raised their family in Union County, North Carolina, which was part of Mecklenburg unitl 1842, and a Starnes enclave.

Frederick's predated his wife's by three years, she passing in 1855. The session of court determining her dower, or share of her husbands estate, meant  to maintain her for a short period of time, was held in Union County, North Carolina, during the January term of 1852.

"On the petition of Motlina Starnes, widow of Fred Starnes, dec'd.....ordered by the court...John Stewart, esq. , Alexander M. Nisbet, Eli O. Richardson, and James E. Irby, Freeholders, ...lay off and alot to the said widow and her family."

The petition of Motlena (alias Mary) Starnes, widow and relict of Frederich Starnes, decd. ...that about the First of year 1851, Frederick Starnes departed this life intestate, leaving your petitioner his widow unprovided for...S H Walkup, attny for petitioner...

Motlina would pass in 1855 and be buried with her husband at the Starnes family cemetery in Union County, NC. Posted by Jobs Children at 6:56 AM