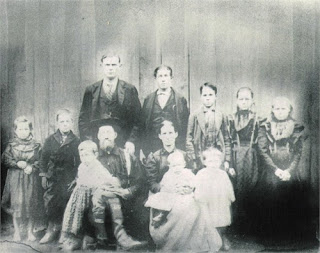 He was the youngest son and next to the youngest child born to Horton H Davis and Julina Aldridge Davis. He is buried next to his parents at the old Rehobeth Church cemetary near Aquadale, Stanly County, North Carolina. In the family portrait, Ritchey is just a shadowy figure, almost ghostlike in appearance, to the left of his mothers knee, while his baby sister Cora sits upon her lap. I have never heard what his cause of death was. If he had grown up, his name would probably have been Richard, but he's Ritchey forever. Rest in Peace little Ritchey Davis.
Posted by Jobs Children at 12:06 PM