The Divorce: Dunk and Omie

Duncan Burris has the unfeted honor of occupying two spots in my family tree. First, he was the uncle of my father's father, as his sister Rowena married Eli Marion Lambert, my great-grandfather. They were the children of David T Burris and Ellen Honeycutt Burris.

Duncan, popularly known as "Dunc", was also the stepfather of my paternal grandmother, Bertha Virginia Lemmons, who would be raised by him, but not have fond memories of him.

Duncan was born in the western section of Stanly County, around the Big Lick area, in 1875. He would die in Concord, Cabarrus County in 1950.

Big Lick was named for the natural salt lick that drew deer, cattle and farmers to the area. In the 1800's, there were a handful of names that dominated the landscape, Whitley, Burris, Almond, Furr, Lambert, Honeycutt, Hinson. It was nearly impossible for a family to have resided in this area for more than a generation or two and not become a member of one or more of these families. Most native Stanly Countians today are from one or all of these family trees.

Duncan and his sister Rowena were the children of David T Burris and Ellen Honeycutt. Lottie Hill, my grandmother's mother, was not the first wife of Dunc and he was not her first husband. Lottie was the widow of Harvey Lafayette Lemmons, from the Lemmonds family of Mecklenburg, Union and Cabbarus County, a strongly politcal family, descending from the White, Walker, Alexander and Query families as well. His grandfather Cyrus Query Lemmonds had made a strong mark on the community with his speeches and involvement in local polictics and 3 of his direct ancestors had signed the Mecklenburg County Declaration of Independence, which predated the national Declaration of Independence.

Duncan's first wife was Naomi or Omie or Oma Almond, and their marriage was not ended by death, as Lottie's was, but  by divorce. Divorce was not anywhere as common in those days as it is now and held a heavy stigma. It seems to be more common among folks in my family tree than usual, however, as I keep finding divorce records among my searches.

Naomi came into the marriage with five children. She had been born an Almond, daughter of John and Margaret Blackwelder Almond, and had married Alphonso Allen Almond, likely a cousin.

She and Dunc were married on July 15, 1900. There was trouble nearly immediately. 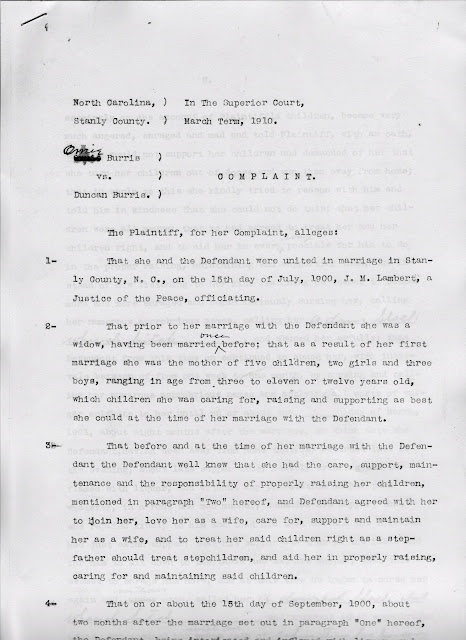 Ironically, they were married by the Rev. J. M. Lambert, grandfather of Eli Lambert.
Naomi came into the marriage with five children, namely, Lottie, Hettie, Lemuel, Samuel and Adam. 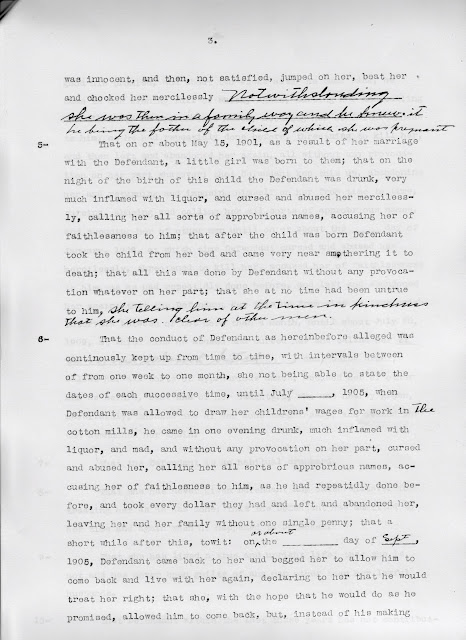 The divorce papers mention a daughter born in 1905. She must have died as a child, because she is not shown in later records. Omie mentions abuse from Duncan while pregnant with the girl. On page two of the divorce papers, Omie claimed that Dunc had came home intoxicated on September 15th, 1900, just a few months after the marriage, and demanded that she "should turn her children out of doors and run them away from home". He did not want to support them. She states that she told him she could not do this, that her children were two young and that this enraged him and that he abused her and called her approbrius names. 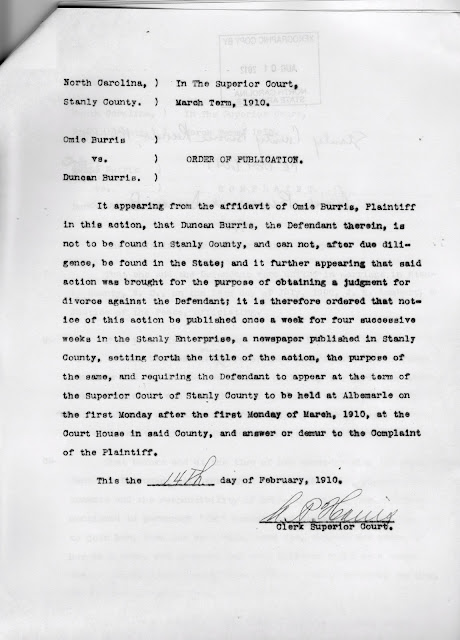 Apparently, Duncan was lying low at the time the divorce was served, but by the time of the census, one month later, in April of 1910, he was counted in the household with Oma, four of her Almond children, and their son Carl.


By 1920, he was married to Lottie, and their daughter Dorothy was born. The transcriptionist mistakenly added Burris to the names of the older children, but they were not. From Bertha, up, they were Lemmons.

In 1930, my grandmother was a teenager and still living at home. This time they got her name right, and her younger half-brother, Ray Von, had been born.


By 1940, Bertha had married Burley, and their oldest son, my father, had been born.

Posted by Jobs Children at 9:54 AM