In every Family History, there are secrets. Some are carried to the grave. Others are passed down to younger generations, as knowledge, as secrets, to never be brought to light. Some people pass through the eons of time with barely a trickle in the documents, barely a wave in the sands of time. One of these persons was Clementine Barringer. This is what I know of her story.

I am so glad I lived with my grandparents as a small child and that my other grandparents lived down the street and that my Grandma Thompson had been a stay-at-home mother who had taught my Daddy how to cook and also was able to tell me quite a bit about her family history. Grandma Thompson's stories and Grandma and Papaw Davis's stories were big hints when I actually sat down and tried to find the documentation for our family histories.

There was one story, that my Grandpa held as a big secret, along with other stories about the Sons of Job Davis. In brief, Job Davis, Virginian, and his wife Sarah Winfield, had 4 sons together. Sarah had came into the marriage with 4 children already, by her first husband Richard Howell. The 4 Davis boys were Henry (1806), James Marshall (1808), Edward Winfield (1811) and Marriott Freeman (1815). Henry may or may not have had a middle name. He is only ever shown as Henry. If he had a middle name, it may have been Hampton, as he seemed fairly fond of that name. One of his younger sons, Horton H. Davis, was my great, great-grandfather.

My grandfather was fond of Nascar and Westerns. If he wasn't listening to car races on the radio, he was watching TV shows like Gunsmoke, Branded, The Lone Ranger, Roy Rogers, Death Valley Days, Daniel Boone, Have Gun Will Travel, Wagon Train, Maverick,  The Rifleman, Rawhide, Laramie, The Virginian, The Big Valley, Laredo, Wild Wild West, High Chaparral, and Bonanza. As a small child, I wanted to grow up and have 4 tall sons named Paladin, Maverick, Laramie and Laredo. And a daughter named Misty. 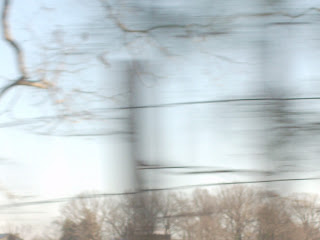 I pictured Grandpa's stories of the Davis brothers riding around on their horses across a meadow, like the Cartwright brothers from TV. Although Stanly and Anson Counties were not the Old West, they were very rural and rugged during the 1800's. I have seen pictures, old tin types, and some picture looking more like painted portraits, at one point in my childhood.  I believe they were in the possession of a first cousin of my grandfather. I do not know who has them now. I only hope it is not someone who has no idea who are in the pictures,  and places no value on them. I hope they have not been destroyed. For now, I can only hold them in my memory. There was handsome Ned, the Sheriff and merchant. Light brown-haired and mustachioed, donning a woolen suit in a  light color, in a yellowing portrait. His proud posture stern and proud, his hair brushed back in waves, he was maybe fortyish in the photo, looking very much the well-to-do merchant. His eyes appeared dark and eagle-like. Then there was the family photo: Job and Sally, sitting down and ancient in appearance.  Sally's face still round and pleasant in her 60's or 70's. Her hair appearing as if she had been  blonde or light-brown-haired as no darkness remained. Job's height not being belied by his sitting position, long lanky legs and arms giving it away. His hat not hiding graying, yet very dark hair. His eyes nearly slits, hawk-eyed and narrow. Henry, the wild one,shorter, his sideways stance telling of his wayward manor. Henry was stocky and broad of shoulder, his hairline advancing, but still a handsome man, as all the Davis's were. His dress that of a gentleman farmer of the time. Then Pete, the half-brother, Peter Howell. Pete was tall and stooped, supposedly light-haired like the Winfields, but showing age in the photo already.  It was passed down that his namesake grandfather, Peter Winfield had been blonde and that Pete and his sister Charlotte, named Peter Winfields wife, Charlotte Freeman Winfield, were blonde and that the two middle brothers, Jordan and John Howell, had dark features like the Howells.  Next was Gentleman Jim, looking very much the farmer, not clean-shaven like his brothers, but bearded. Taller than Henry, but shorter than Ned, named for James Marshall, a friend of the family and perhaps a relative. Jim looked like he may have been the brother who took the most after Patriarch Job. I remember thinking that Marriott, the youngest son,  called 'Merritt', who was probably still in his thirties in the photo, was 'cute'. He was clean-shaven except for a small mustache, and round of face, like Sally. A very pleasant looking fellow, taller than all of his brothers, save old Pete, who was 20 or more years older than Marriott. There were 3 unknown women in the photo. As Ned and M. F. Davis were not married at this time, they were probably the wives of Pete, Henry and Jim. That would have been  Betsey Floyd Howell,  Martha Palmer Davis (second wife of Henry) and Rowena Lee Davis (Jim). They were posed in front of a two-story house with a broad porch and balcony. This was perhaps the Davis home near the Rocky River.  A mule is to the left side and a huge tree to the right. The chairs are wooden and perhaps thatched seated. 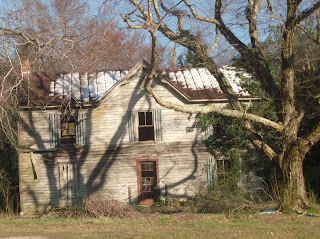 In my memories, it was Edward Winfield, who had the bond to Tiny as she was called. In the story, a Davis man, who was of considerable age when he married, had not spent his bachelorhood alone. He had been cared for, in the manner of a wife, by a woman named Tiny. She took care of the house, cooked, etc,  in such a manner that this Davis bachelor had no need of a wife. Perhaps Tiny had been a housekeeper only. Perhaps she had been more. That was never stated. All I was told was that she had been important to this Davis bachelor, who I thought was Ned, Edward Winfield Davis, and that she was beloved and had been buried in  the family cemetery. Haut or Hawk had a strong resemblance to Job, the linear face and deep set eyes. He has the Palmer cheekbones of his mother's family.

In the 1880 census, H. H. Davis is shown with Clementine Barringer and her 3 young daughters in his household. Ancestry lists Clementine as her own Head of Household. Her  profession, housekeeper. Ten years earlier, H. H. is shown living in the household of his Uncle E. W. Davis and wife Rebecca. In the original document, I can tell that Mary 'Hartrick' is actually Mary Hathcock, Rebecca Hathcock Davis's sister. The transcriptionist got it wrong. Priscilla Legrand is a Household Servant and George Crump is listed as a Farm Laborer. But no Tiney.

This leads me to believe that the Davis bachelor who cared so much for Tiney, that he buried her in the family plot, was not Neddy Davis, but instead Haut.

Now, according to the story, Tiny had been born a slave, but was a very light-skinned lady of African and European heritage and known to be beautiful. She was said to have had blue-eyes. That people were enchanted by her blue eyes.

If Tiny had been born a slave, she was not from the Davis plantation, as they had taken the name Davis, and the families of Marvel, George,Buck and Babe, had remained near the family and share-cropped. It is in the Stanly and Anson county records, of the Davis family setting them up with properties, applying for marriage licenses for them and witnessing marriages. No mention or record of Tiny or Clementine.

The Barringer family of our area were Germans that originated in the Cold Water Creek area of Cabbarrus County. Many of them spread into neighboring Stanly and Rowan counties, some even across the river into Montgomery. There was a family listed in the Fork section of Montgomery County, that was very close to the Davis's, of an Edmund or E G L Barringer, whom I believe may have been the family that Clementine had  been born into as a slave.  Location is the first reason. Second, in the Slave records of 1860, E. G. L. Barringer has a  14 and a 15 year old female listed, either of which could have been Tiny as she was born around 1845. The other Barringer families do not. I intend to research this possibility further. And lastly ,
this Barringer family includes a daughter Lucy Ann, the same age as Tiny would have been, born around 1845. Maybe Lucy Ann and Tiny were playmates, as Tiny later named a daughter Lucy Ann.


In the 1900 census, Tiny is shown as living with her daughter Lucy Ann. Although she is listed as Mary in this census, I found the marriage license of Lucy Ann to William Parker in Stanly County, with her mother listed as Tiney Barringer.


Tiney is listed as having had 8 children, but only 2 living in 1900. Lucy Ann was one of those. I have not found record of Marticia and Adia beyond the 1880 census, and no clue as to the names of the other 5 who obviously died young. The second one who was alive in 1900 may have been Adia, as I did find an Ida Barringer, who may have been Adia, but no proof to link her to Tiney.

By 1910, Tiney is not living with Lucy. Her tombstone lists her date of death as January 18, 1905. The transcriber for the book "These Hallowed Grounds" which lists abandoned cemeteries of  Stanly County, has her 'Born' date of 1887. Having been to the graveyard many times, it appears to my cousin and I, that the date is actually 1851, which would be more in line with the census records, especially knowing who Tiney is and that she shows up in the 1880 census as a grown woman with teenage daughters. 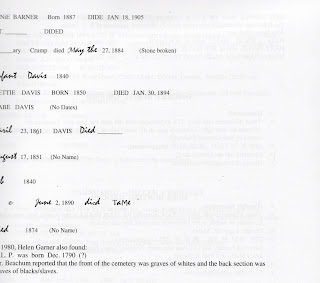 But Clementine Barringer was buried, as in the story, in the Davis family plot. She did indeed live with a Davis bachelor.


Later records of her sons Lindsey and Aldophus, show her as having the surname Davis.
Maybe Lucy married a Davis after the death of Ed Wilson. Or maybe she told her children her maiden name was Davis. Were the daughters of Clementine Barringer biological Davis's? I intend to investigate. If there are any descendants of Lucy Ann Barringer Parker Wilson Davis out there, maybe a DNA test will prove it. 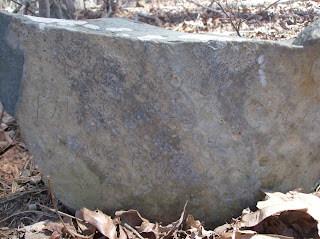 In the meantime, Clementine 'Tiney' Barringer rests peacefully under the magnolias and dogwoods of the old Job Davis Cemetery near Aquadale/Cottonville, Stanly County, where a Davis who loved her marked her grave.
Posted by Jobs Children at 8:48 AM