A Trip to the Badin Museum

The town of Badin, along the eastern border of Stanly County is getting close to celebrating it's 100th birthday.

Before Badin, there was Ebenezer Baptist Church, the Falls, the Narrows, the Ferry's and the Yadkin River. A narrow road, following roughly present day Valley Drive, led from the area of Ebenezer Baptist, down through the Valley connecting with the ferry roads all the way to the Swift Island Ferry, close to where the Swift Island Bridge crosses between Stanly and Montgomery Counties on Hwy 24/27. 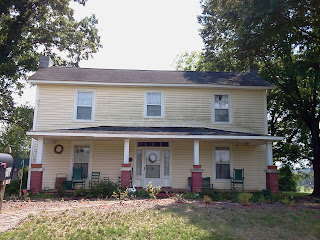 Ebenezer Baptist Church has it's place in my family tree as one of my ancestors, Samuel P Morton ministered there. I am a descendant of he and his first wife, Vashti Calloway. Vashti Calloway is supposed to be buried on one of the Graveyard Islands in the Yadkin River, where many cemetaries were relocated due to the damming of the river. Her father Job Calloway is supposedly buried there. The above photo is of one of many Ferry's that operated along the river. Two of the most well known were the Kirk ferry and Lowders ferry, which operated near the present day Morrow Mountain State Park boat landing. There were several communities that sprung up along the river in the early days of the county. These photo are of one of them, Millertown. Several of these small communities, like Tuckertown and Henderson across the river in Montgomery County, are now mostly underwater after the damming of the river. Many families were displaced and it was the cause of a great deal of migration from the area or to the larger towns in the area. Many of these little towns were called so as an extended family, like the Millers, started their own businesses, like mills and ferrier services, and Inns,Ferry's and Harness shops and everyone that lived in the little town was related.
The town of Badin, itself, is the baby among the communties of Stanly County. 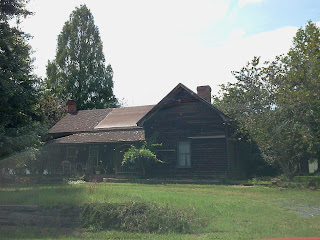 Built with Ebenezer Baptist Church as its center, it had its beginnings when in the spring of 1913, a French company, L'Aluminium Francais, began working on a dam at the Narrows of the Yadkin to provide a smelter for power. They began to build a village for the workers to live in and named it Badin for the president of the company Adrien Badin. The village was located at the southern end of the lake created by the dam, at which Ebenezer Baptist Church, and a few homes surrounding the church and nearby, already existed. The French built several single family residences, buildings for the smelting plant, a clubhouse, a managers residence, and had started a series of apartments.

By fall of 1915, the start of World War I would change things. The French would pull out of the project and an American Company from Pennsylvania would take over. The Mellon group owned the Aluminum Company of America and ALCOA would become a big part of the Stanly County landscape for decades to come.

Before the Roaring Twenties, the town of Badin would include a school, a theater, a hospital and several merchants and store buildings. Besides it's picturesque French architecture, another unique feature of Badin is that it was actually two villages, one that mirrored the other. While the clubhouse, golf course, supervisors housing, plant offices, fire department and other buildings were built on the part of Badin that is situated on the banks of Badin Lake, the west part of Badin was built behind the large plant dividing the two sections of town by an enoromus smelter and industrial presence. This section also included churches, a school and various sizes of cottages and was built for the non-white employees and their families. ALCOA was one of the first industrial facilities in the area to 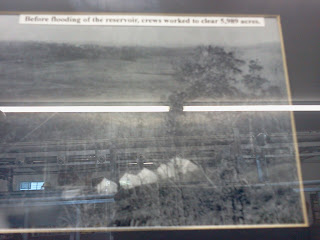 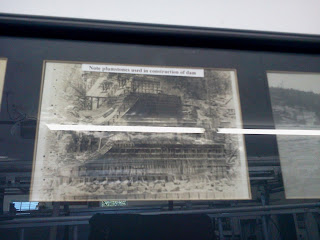 hire non discriminately and offer equal pay to minority employees. Being a north company, and a Union industry, Alcoa paid wages above and beyond what most farm employees and textile mill workers were accustomed to and allowed their employees a solid middle class existence.

Recently, my three year old grandson and I visited the Badin museum. It is located in what I believe is the former post office and also includes the old fire station and one side of one of the unique townhouse apartments built by the French company. 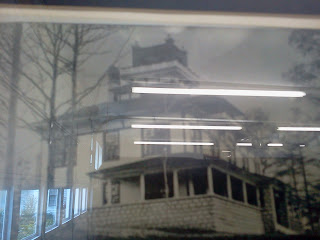 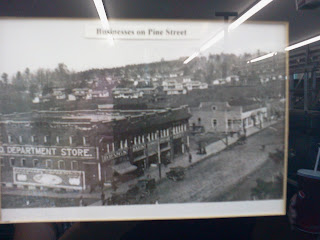 There are fascinating photos of the old village of Badin, from the building of the dams to the building of the village. Above is the old clubhouse, which I believe was destroyed by fire. To the left is a photo of the town around 1919 with a Department Store in the foreground and houses behind.

The town of Badin climbs Falls Mountain. A road accesses Falls Dam, but the far side of Falls Mountain is part of Morrow Mountain State Park and the road used to travel all the way through and passed by the foot of Attaway Hill, home of Dr. Francis Kron, on its way to Lowder's Ferry. 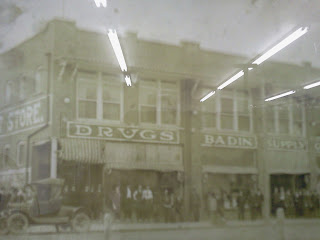 The scenic path of Valley Drive ambles out of Badin through the valley of Mountain Creek, past Millertown and at the foot of Clodfelter Town and intersects with Morrow Mountain road at the site of the old Moonset Inn. Valley Drive follows roughly the same projectory of a much older road that traveled to the Swift Island Ferry.

Sadly, the glare on the glass was unavoidable in trying to capture by camera, these old glass encased photos of old Badin. It is truly a one-of-a-kind little town. 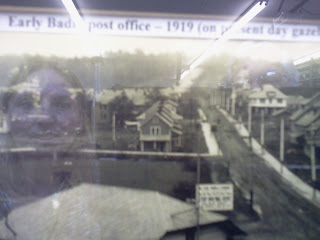 The photo above is of the old drug store. Other businesses currently occupy the old buildings in the little town.

The photo to the left shows the gentle rise in the hill climbling streets and a good view of some of the townhouses. Below is a shot from the top of one of the streets looking down into the village. 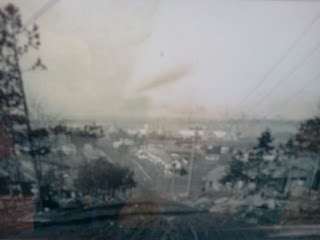 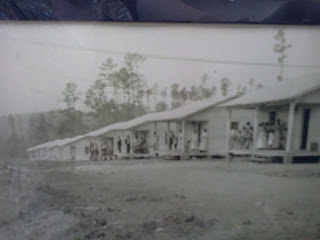 To the left is shown some early construction in West Badin, houses built for dam workers before the roads were set and the houses were underpinned. West Badin was built strictly for minority workers, mostly African-Americans, but I am told their were a few Native Americans and Asian immigrants that lived in that section as well. 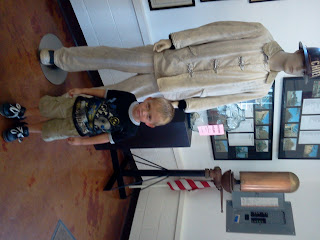 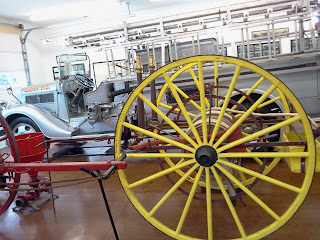 My grandson loves fire trucks and firemen. Here he is standing beside an early 1900's fireman's uniform. Also on display is an old motorized firetruck, alongside a very early manpowered firehose wagon, you can't exactly call it an engine, as it did not have one. 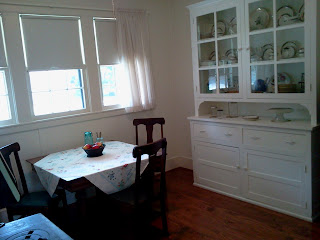 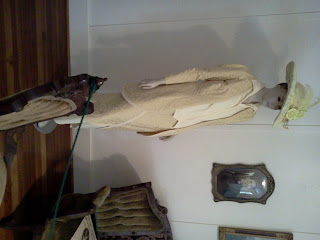 Inside the refurbished townhouse. A kitchen as it may have looked in 1915.


To the left, what the fashionable office employees wore in the early days of Alcoa. A hat was always part of the ensemble. 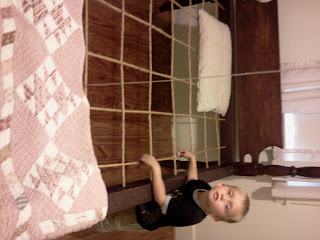 To the right, my grandson checking out the way a bed was strung to hold up a mattress back in the day.

Below, beautiful quilts were an art in the early part of the last century. 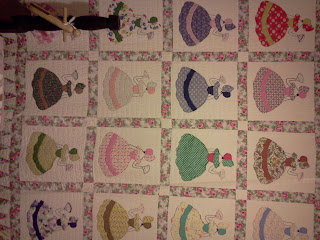 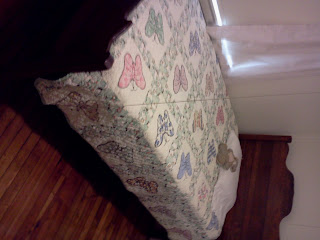 A childs bed as it may have looked in 1919 Badin. And to the right, Eli posing with an antique cradle that most likely rocked many a baby to sleep.

We enjoyed our visit to Badin and to the museum. I believe I learned as much as Eli did. I hope I can take him on many more excursions to learn about his heritage. I was the recipient of my grandfathers love of family history and genealogy. Eli is the only one I have so far to pass it down to. I hope to instill in him the value and love of the knowledge of who and what came before. Our children are our future. They are the link to preserving our past.
Posted by Jobs Children at 6:07 AM