Rough On Rats: The Other Sallie Crump

While looking for any information on the eldest daughter of Henry Davis, Sarah "Sallie" Davis Crump, I came across this story of a doomed and troubled young girl. The tale of her evil deeds was reported far and wide, as far away as Illinois, from the tiny town of Norwood in southern Stanly County, formerly known as Center. 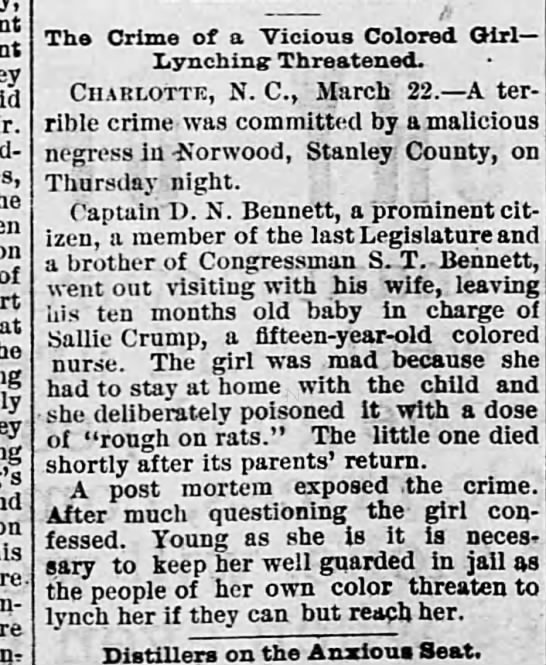 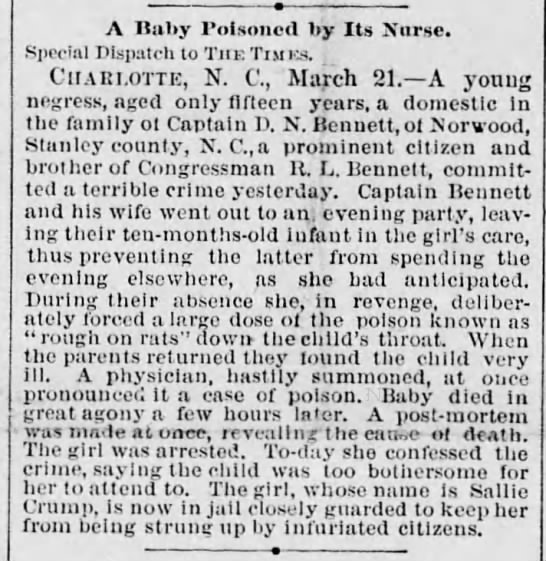 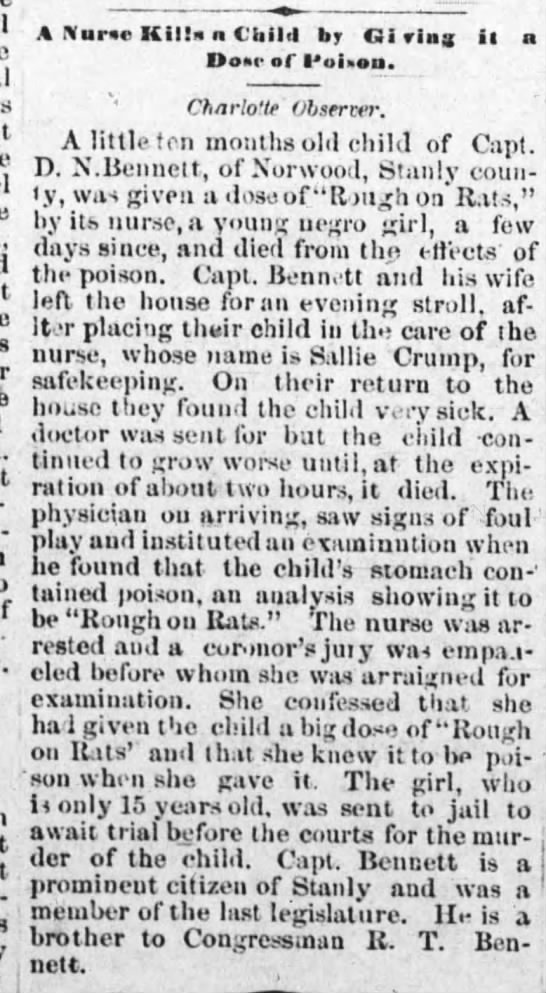 
But who was this Sallie Davis, the teenager who poisoned the baby she was hired to sit for?

In 1870, when she was just a baby, she was living in the household of 76 year old John Crump. 1870 was the first census that the majority of African-Americans show up in, if they were held in slavery. Sallie Crump was among the first generation of children born after the Civil War, and born into freedom. The few who showed up in census records prior to 1870 as "Free People of Color" were often Native Americans or persons of mixed heritage. If born to Native American mothers or White Mothers, they were free, even if they bore African-American heritage. It is surprising, actually, how many persons there were, and they are hard to document, as they tended to move often.


John and Jemima Crump may have been the grandparents of Sarah Crump. African-American families were very fluid. Families were not always nuclear, and extended families would board together. This fact made them harder to trace in records as well. While it appears that Rowland and Letha Crump may have been the parents of James and Sarah, Rowland shows up as single a decade later, living alone with his mother, Jemima or "Mima". No wife and no children. John probably passed away by then, and Letha, too, as Rowland is counted as a widower in his mother's home in 1880.


But what of his children? And were they his children? The large space between them was not typical. Perhaps James was a child of one or the other of them by a previous marriage. Perhaps Sallie was placed in the home by an overwhelmed young mother to Letha, who maybe had just lost a baby and could take care of Sallie better and emotionally needed her. That remains and will remain unknown. However, in 1880, Sallie shows up in the home of Thomas and Mandy Crump, not with Jemima or Rowland, and is called a daughter. Was she their daughter, or was she a niece?  This was 4 years before the poisoning incident. 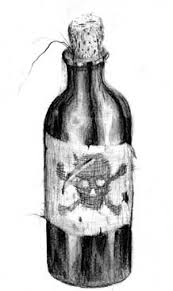 The child which Sallie Crump poisoned was that of David Neville Bennett. D. N. Bennett was a respected Civil War Veteran. He served as a Captain. The following is his service record from Fold3.com information:

In the end, Sallie Davis was neither hanged nor poisoned. 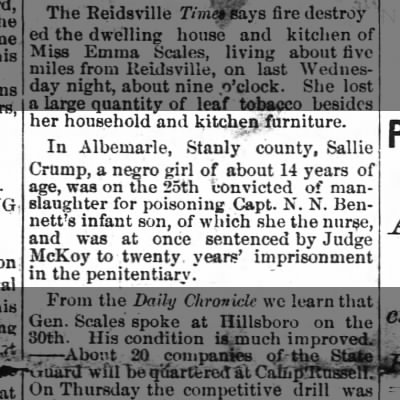 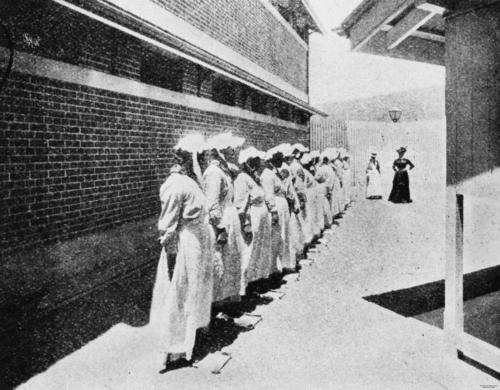 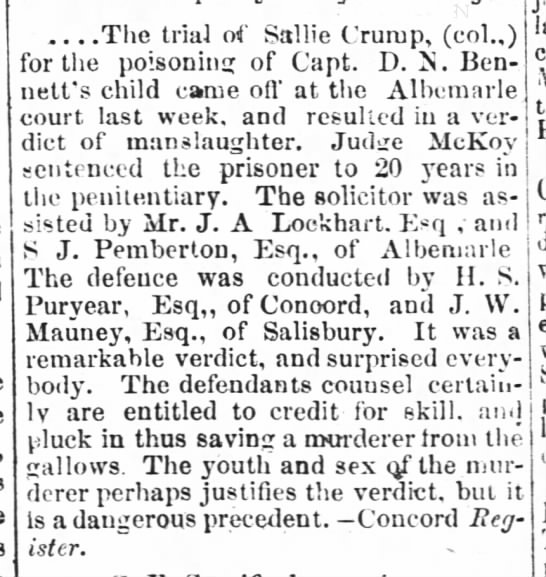 But what of Sallie after her release from prison?

She took residence in Salisbury, NC and may have tried living the straight life for awhile, but she probably recieved a good education in crime and illegal gain while in prison.

1900 has her living uptown with the McConnaughey family.

By 1910, she had been earning a living in the illegal alchohol trade and was sent to the workhouse again. 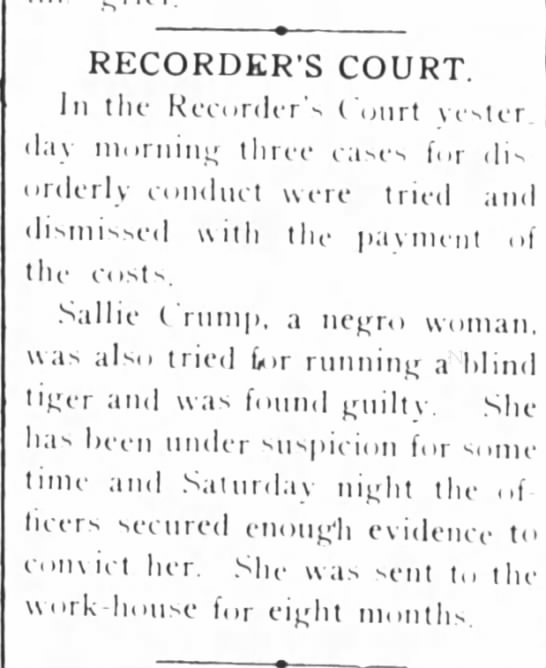 
After this, Sallie Crump disappears from the records. She may have passed away before death certificates began being issued around 1916.