The family of Susannah Briggs

In recent posts, I have been exploring the family of William Palmer, the Nailer, who arrived at Plymouth Colony on the second ship, The Julian, which arrived there after The Mayflower.

By his last wife, Mary, there was another William Palmer who was raised by her second husband, Robert Paddock, the blacksmith. This William moved to Dartmouth and married a young woman named Susannah. She was shown by a variety of maiden names, but those who have well studied the families and record of this era and area have come to the consensus, with undeniable proof, that she was Susannah Briggs, the daughter of John Briggs of Portsmouth, Rhode Island, a Deputy Commissioner. Every generation adds a new family line in a family tree, whether up or down, the lines of all the mothers, grandmothers, great-grandmothers and onward, adds as much to an individuals family line as does the paternal lines. Individuals tend to identify with the male lines more, as they usually carry that name.

The Palmer line is a maternal line in my grandson's family tree, as is the Head line that Susannah's granddaughter, Elizabeth Palmer would eventually marry into, Head being the maiden name of his Paternal Grandmother, and I being his Maternal Grandmother.

So therefore, I wanted to look into the family of Susannah Briggs. It was not possible to look into the family line of Mary Trine Palmer Paddock Roberts, the mother-in-law of Susannah Briggs Palmer, as the maiden name of "Trine", could have been contrived, although it had been suggested that her mother was a Bradford, and perhaps Mary was a relative of William Bradford of Plymouth notoriety.
But that of Susannah is another story.

The following book states the origins of the name Briggs as being of Saxon origin and derived from the word 'bridge'. The first mention of this surname was a William "atte Brigg of Salle" mentioned in the records of the Edwards I and II, and origins of this family about Norfolk, England.


New England Families, Genealogical and Memorial: A Record of the ..., Volume 3

John Briggs, father of Susannah, made quite a name for himself in New England. He is even called "The Founder of Province".

The basic facts of John Briggs existence are that he was born in 1609 in Essex County, England, the son of  a Henri Briggs. He sailed to America in 1635, settling originally in Boston. He would later migrate to Newport, settling finally in Portsmouth. He died there in 1690, at the age of 81. He married Sarah Cornell and had six known children.

I have discovered the following events in his life as follows.
The Will of John Briggs was written on April 19, 1690 and was proved on November 17, 1690. His death was likely around October of that year.
One of the most striking notes on the life of John Briggs was the testimony of him in the case of the death of his sister, Rebecca Briggs Cornell, who had married the brother, Thomas of John Briggs wife Sarah. It was not uncommon in those days for sibling of one family to marry siblings of another.

Rhode Island was a haven of sorts, for the Puritans who were not quite so Puritan, or who did not exactly go with the teachings of the most devout in Massachusetts. John Briggs was one of those and in 1656 had converted to Quakerism.

John Briggs' testimony in part, led to the conviction and hanging of Thomas Cornell II, his nephew, for the death of Rebecca Briggs Cornell, sister of John and mother of the doomed Thomas. A book has been written on the murder, called "Killed Strangely: The Death of Rebecca Cornell", by Elaine Forman Crane. According to the Puritan records, John Briggs, 64 years of age at this time, testified that he had seen a spirit in a dream of  Rebecca, who told him how she had burned. 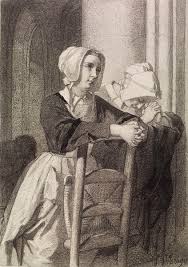 This testimony of the apparition of Rebecca, along with other testimony that the relationship between the 73 year old Rebecca, and her middle-aged son, who did not like that fact that his mother and not himself, was in control of the property. The family at that time consisted of Rebecca, her son Thomas, his second wife, his 4 sons by his first wife and their 2 daughters together, along with 2 hired men. His wife Mary was expecting a third daughter when he was hanged.

After the death of Rebecca, and hanging of her son, two other persons were tried for the same murder, one the wife of Thomas and an Indian man who worked for them. As an interesting aside, the daughter, named ironically "Innocent" born posthumously to Thomas Jr. and Mary Cornell, was an ancestress of the infamous Lizzie Borden.

The full truth of that horrible winters day of February 8, 1673, will never be known, and John Briggs participation in it would have been fully dismissed by any sane juryman this day and time.

Such was the uncertain and strange ways of the Puritans.

John Briggs and Sarah Cornell Briggs were the parents of :

Susanna would marry William Palmer and when he died she married John Northway.