Laura Davis was a granddaughter of Job Davis. Unlike the successful tales of some of her cousins who migrated west, Laura's life and fate was a direct result of her fathers alcoholism and the resulting debts and loss of property it had caused. 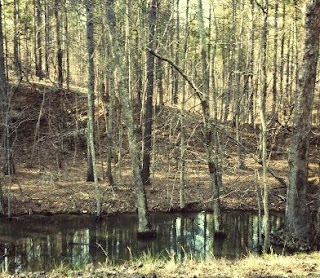 Laura was not yet born during the 1850 census, but was probably born shortly after it was taken. In it, the last two Davis daughters, Laura and her youngest sister Margaret Victoria, do not show up. The only census these two show up in with their parents are the 1860 census, where all of the brothers are living/working with someone else and the two older sisters, Sallie and Nancy, are married, while the two middle sisters, Mollie and Mattie, and the two youngest, Laura and Victoria, are living at home still.


Their father, Henry, dies sometime between 1862 and 1865, when his estate is settled. The death of their mother, Martha Palmer Davis, is reported in The Southern Christian Advocate, in 1879. However, she does not show up in the 1870 census that I can find.

Laura shows up (her name misspelled by transcriptionists) in the 1870 census, living with her oldest sister, Sarah "Sallie" Davis Crump, in Ansonville. You have to be very familiar with the family grouping to figure this census record out, as the handwriting was haphazardly interpreted. Sallie is transcribed as "Lallie" and Laura is incorrectly given the surname of her brother-in-law, "Crump", when she was a Davis. The uniqueness of the name "Woodson" is what brings it all to clarity. 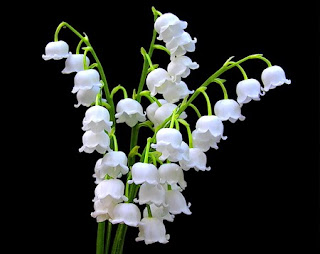 Laura disappears during the 1880 census and 1900 census. She is probably living with a relative and her surname, again, incorrrectly given. Further tracing of all of Henry's descendants may bring her to light.

However, she clearly shows up in the 1910 census, her name and identity given (again, Laura is destroyed by a transcriber, but looking at the actual document, it is clearly Laura. ) She is living in Albemarle, Stanly County, NC,  with my Great-Great Grandmother, Julina Davis, widow of Horton H. Davis "Hawk", who passed away in 1906.

Laura never married, and her singularity came at a time in history where when had few options outside of marriage, and hers seemed to be to live in poverty and bounce around between relatives and living off the county. All of her sisters married, as is known, although the fate of her sister Mary aka "Mollie" remains unknown. It has been reported that she married and some of it reported incorrectly. I've found no true trail of her past the 1860 census and she very well may have passed away at a young age and never married at all. But something tells me she did marry, and is just waiting and wanting to be discovered.

The fate of Laura is clear however, and although I've not discovered where she is buried, I believe I may be on the trail. The newspapers report not through an obituary, but through a cost to the county, of her passing. 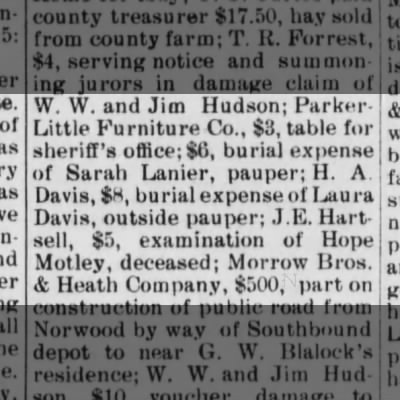 Laura is listed as a Pauper and her nephew H. A. Davis, is paid $8 to bury her. She may have been buried without a marker and therefore, her grave can not be found today.

But the paper can give a trail of her existence as well as her passing, and may give a few clues into her life.

One of the most telling is this clip from 1905, explaining her escape from the state hospital in Morganton. People ended up in the State Hospital for multiple reasons. For some, it was a mental breakdown, for others, a debilitating disease, like TB, could send them there. However, I've also read that many women were sent there for 'female problems', like menstral problems, pain, possibly cysts, difficulty carrying children, miscarriages, etc. For Laura, it could have even been the fate of her father, a case of severe alcoholism. But clearly, she did not want to be there. 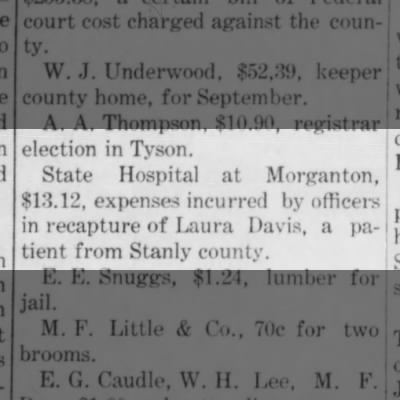 Just one month prior, it had been ordered that she recieve a small amount of support, or welfare. 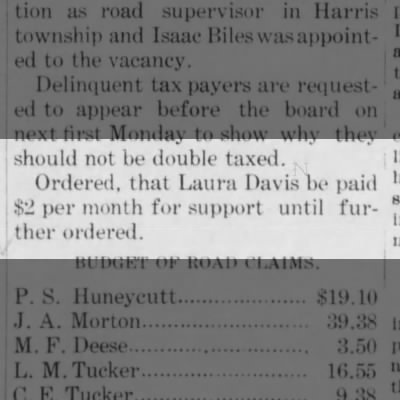 In fact, from 1901 until the year of her death, it was reported that she was given support, "on the county dole", as a pauper, numerous times. 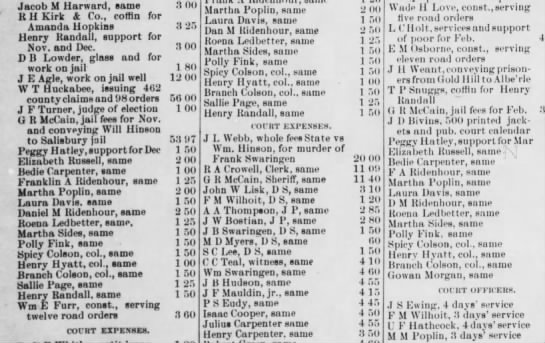 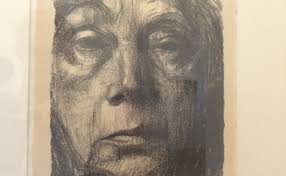 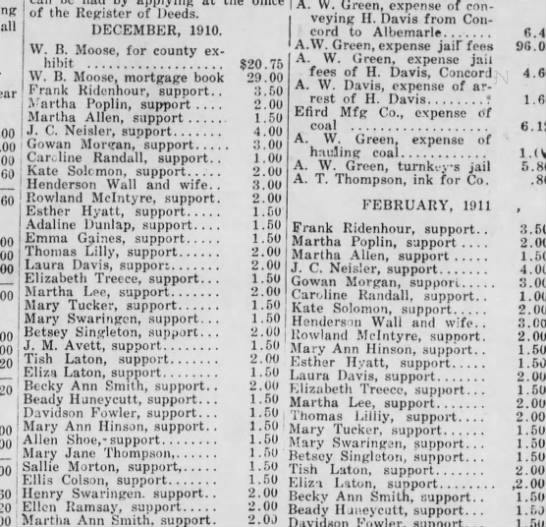 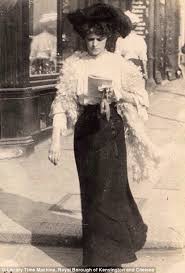 Sadly, so far, there is no more to be found on Laura Davis. Perhaps, more records can reveal why she was sent to Broughton, and perhaps where she might be buried. She may have been buried in the Davis family plot with her grandparents, Job and Sarah Davis. As she was last living with her sister-in-law, Julina Aldridge Davis, perhaps she is buried in an unmarked or poorly marked grave at Rehobeth, where they were members. Several of the Davis's from Henry's line are buried at either Palestine or Prospect Church, near Cloverfork Creek, which was Henry's last area of residence.

But from all indications, Laura lived a poor, sad, hand-to-mouth existence. Did she experience any joy, or just mournfulness? Why was she placed in the state hospital? Was it because no one wanted to deal with her? Did she have mental problems, or was it the fact that she was just unmarried, unemployed and unwanted?

Posted by Jobs Children at 5:43 AM