It's Never Really Over: More on Joseph Marshall Herring aka Marshall Elmer Harwood 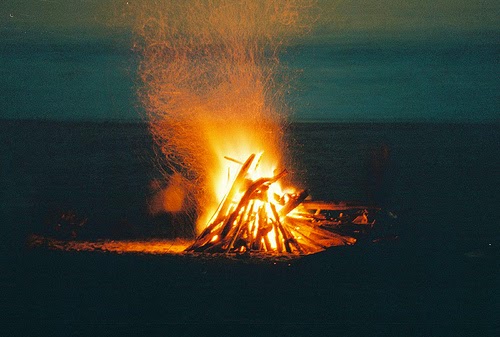 Joe or Joseph or Jocephus Marshall Herrin, son of Eli Ransom Herrin, was the subject of my post:

He had married into my family with his 1893 marriage to Daisy Herrin, which went immediately sour. Why had F. F. Starnes, planter, miller and businessman, allowed his 15 year old daughter to marry the troubled and trouble that was 23 year old Joe Herrin?

1893-1896 was a very busy time for Joe Herrin.
He got married.
He got thrown on the chaingang for theft in Stanly County.
His young bride ran off with her cousin's husband.
He escaped jail.
He eluded capture.
He was injured in a fight and swore to return to jail.
He returned and did his time.
He started dating a Miss Sloop to be turned down.
He then courted a widow with 8 children and married her.
He was arrested for bigamy as his first wife was still living.
His second marriage was anuled so he remarried her.
She died. It looked like Joe might be in serious trouble, but the medical examiner determined her death an aneurism.
He then married his third wife, and this would be his longest lasting relationship and she would be the mother of his 4 children.
And, most concerting of all, he changed his name to Marshall Elmer Harwood. In looking through the Stanly County land records, I discovered that something else had happened in Joe's life the year he married Daisy. - His maternal grandfather, Ransom Motley passed away. And Joe sold his one fifth share of his mother's inheritance.

Eli Ransom Herrin had married 2 of the daughters of Ransom Motley.

They had 2 daughters, Christena "Teena" and Eva Elizabeth.

Sarah Motley Herrin passed away prior to 1870 and on April 9, 1871, he marrried Jemima Motley, by whom 5 children were born: Sarah, Joseph, Mary, Martha and Laura.

"$154.....being the land that I inherited from my mother's estate.....one fifth interest in said lands known as the Ransom Motley lands."

This property served Joe well. At this time, he may have needed fine money or bail money as he had acquired some legal problems.

The second deed dealing with this property gives to a bit a confusion.

Newspaper accounts show that the man formerly known as Joseph M. Herrin, was now using the name of Marshall E. Harwood.   And even that last name could get a little skewed.

Below is shown record of his May 21, 1896 Rowan County marriage to Mary Catherine Rogers Pethel, a widow with 8 children. He gave his name as "Marshall E Howard", son of "E B and Elizabeth Howard" of Stanly County.

In his last marriage to Jenny Nora Harris Hall, in 1928, after his third wife, Mary Ellen Thomas (Harwood?/Herrin?) passed away, he gave his name as "Marshall E Harwood", son of C. M. and Jemima Harwood, with mother dead and father living, a resident of Mt. Pleasant, Cabarrus County, NC.  At this time Joe/Marshall was truthfully a resident of Kannapolis, NC and his bride was from Thomasville in Davidson County, NC and her parents from "Chandlers", which is near the area we now know as "Tuckertown", near the Stanly/Montgomery/Davidson/Rowan county corner and very close to Randolph, along the north border of the Granville line. Its in the modern Badin Lake/Uwharrie Point area. 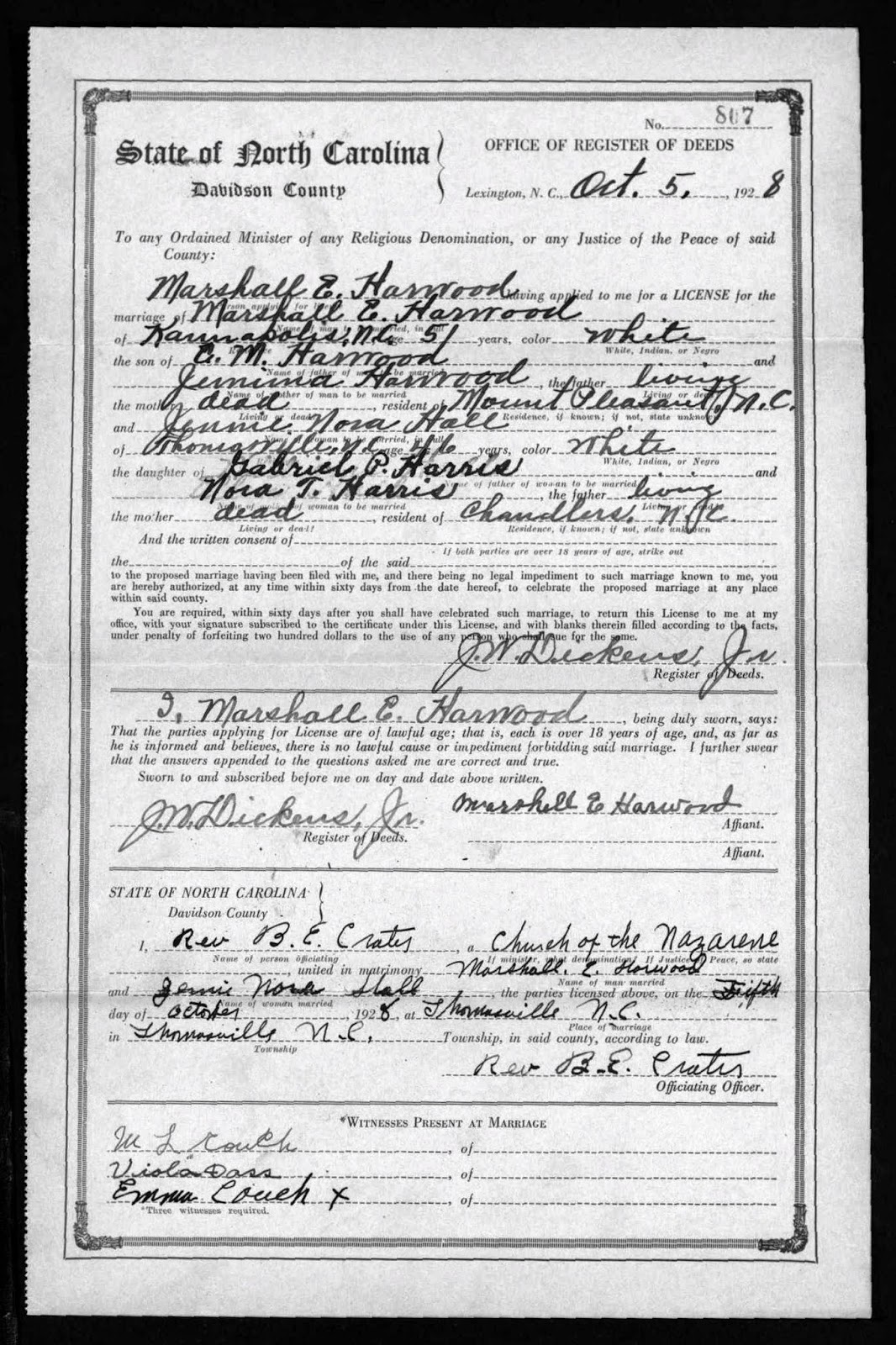 When Joe alias Marshall married his longest term wife, and mother of his 4 children, Mary Ellen Thomas, from the New Salem community of Union County, he proffered yet another set of parents "Frank and Laura Harwood", and was using the name "Marshall E. Harwood".


The year was 1898, so in the following deed, when "Mary E. Herrin", was interviewed, it was this third wife, Mary Ellen Thomas "Harwood".  This shows, that a decade after using the Harwood moniker, that he would switch back over to Herrin when the event called for it, or suited him, and his wife knew about it. Mary Ellen also had to know that they were living under an assumed name, and giving their descendants a false heritage. They were not biological Harwoods, they were Herrins.

Joseph M. Herrin to Sarah E. Blackwelder et. al, .. Anson County....this deed, made this 19th day of  May, 1904 by Joseph M. Herring and wife M. E. Herrin of the County of Anson and State of NC, of the first part, and the four daughters of Eli R. Herrin, to wit, Sarah E. Blackwelder, of Cabarrus County and Mary J Rowland, Martha A. Crayton, and Laura G. Plott, of Stanly County, for $500.....1/5 interest in a certain tract of land in Almond township.....both sides of Running Creek, adjoining Wiley Lambert, J. F. Herrin, Frank Dunn, Daniel Page, Whit Page, H. D. Crayton and others, known as the Ransom Motley lands willed to his daughter, Jemima and to her bodily heirs......H. M. Baucom, Anson County, Lanesboro Township.

So, what was with the juxtaposition of names? Did Joseph M. Herrin actually think he was an actual Harwood? Did he think that Eli R. Herrin was not his biological father? Could there be any truth in that theory?

Several articles ran on the long-lived Eli R. Herrin in the Stanly and Cabarrus newspapers. In all of the articles, the grand and endearing old man claimed to be the father of 7 children. He and his last wife, Iva Eudy Biggers, a widow of Wiley Biggers, had an infant son who died a few months after birth, and is buried at Herrin's Grove, where much of this family is buried. The 7 children he was father of in his 1920's and 30's interviews were his two daughters by Sarah Motley and 5 children by Jemima Motley, including Joe. The four sets of parents given on his four marriages were:

I looked to see if there was a Mr. Harwood living near Mt. Pleasant in 1928. who could have been the E. M. that Joe/Marshall was referring to.

There was one, Emsley Harwood, who spent most of his life in Stanly County in the Almond Township, and lived in later years with his son Jonas, near Concord. Emsley was the son of Reddin and Elizabeth Hatley Harwood and was married to Sarah Furr. But then there's that whole "Frank and Laura" thing he threw out during his marriage to Mary Ellen Thomas. Was there a Frank and Laura?

The answer was "NO"! There was not a Frank and Laura Harwood anywhere near Joe Marshall Herrin when he was born.

For any other theory other than Eli R. Herrin being the father of Joe Herrin, I believe Joe aka Marshall was full of: 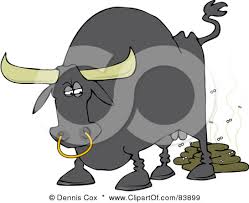 And passed on to his children, a false identity and incorrect family name.  The children of Joe/Marshall and Mary Ellen Thomas Harwood (Herrin) were: