The Tragic Death of Matt Hill

Yep, this is kind of the look I give to people who claim to have a family tree full of the most honorable, angelic, perfectly lived ancestors, who never made mistakes, lived long saintly lives and died quietly of old age in their sleep, and multitudes would come to their funeral to mourn.

Not that I don't believe them...well, maybe I don't. But the above scenario is not what I have found in my digging around. While, there were a few 'saints' in my family tree, I also have my fair share of sinners. Flawed and feisty, imperfectly perfect forerunners who were very very human and very very intriguing and they did not all die old or quietly.

Quietly honestly, my family tree is a walnut, or hickory or pecan. It's full of nuts.

William Mathew Hill was one of my 8 Great-Great Grandfathers. I did a post on his wife, Sarah Jane Hooks Hill, and her lawsuit against the railroad, but until now, I never really looked for any newspaper accounts of what happened to Matt Hill, or "W. M." as he is sometimes seen.

Matt Hill was an imperfect individual. He had a son, William Thomas Hooks, with his wifes younger sister, Emmaline Hooks, who had another son out-of-wedlock already, at the same time his wife was expecting their first child together.  My Great-Great Grandparents did not divorce over that failing, they stayed together, even having more children of their own.

According to newspaper accounts, he was no stranger to the jug, either. At some point, he supposedly owned a mill, as passed down the line, Third Great-Grandfather, Frederick Fincher Starnes, who owned a mill on Coddle Creek, in that area Matt Hill's mill was said to be. Maybe it was on the same creek.  And he did not live to be an old man.

Matt Hill was ran over and mangled by a train. And the only mill I can find that he was connected to were the Cotton Mills in which he was employed. However, the 1900 census labels Matt Hill as a "Grist Miller", though I am not sure where the Grist Mill was.  Research sometimes tends to disprove family stories, instead of corroborate them.


His death was not the only time he was injured or made the papers. He was also injured while working and mangled his hand. He was not a lucky man. 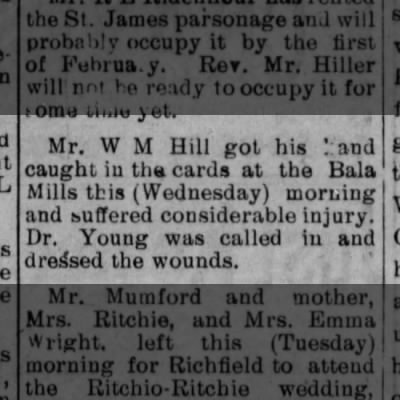 
William Mathew Hill was born March 1, 1854, in Stanly County, North Carolina. He was the son of William Hill and Obedience "Beadie" Ramsey Hill. He was the grandson of Julious and Mary Hudson Hill and Samuel and Rebecca Helms Ramsey.

He married Sarah Jane Hooks on  August 29, 1875 in Stanly County. His children, born in Cabarrus, Union and Stanly Counties were: 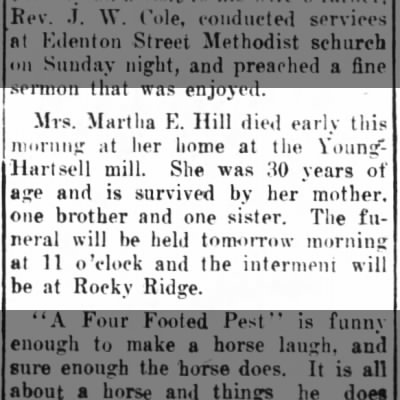