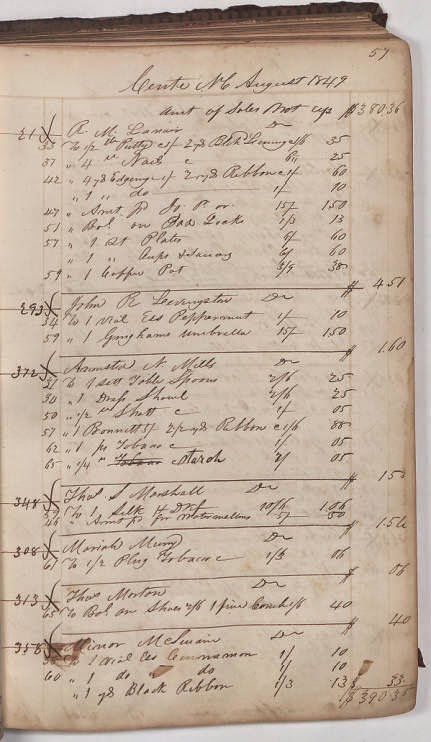 The above page is from an old store ledger. The store appears to be a General Merchandise store and was located in "Center", Stanly County, North Carolina. Center is now known as Norwood, NC, named for the Norwood Brothers Store that was located there. Could this have been the Norwood brothers store ledger? Maybe. It's difficult to tell.

This ledger is full of names I recall seeing in my research. At times, names become so familiar, they are almost like living people you know, or at least like celebrities you are familiar with.

This page, page 57, was from August of 1849. The entries are shown in alphabetical order by month.
On this page we see-

Moriah Murray was the sister of my second great grandmother, Priscilla Murray Aldridge. She was a unique character and this shows she was at least still alive in 1849. Her estate was settled in 1853 and she left 7 children behind.

Here, it shows she bought a plug of tobacco for 40 cents 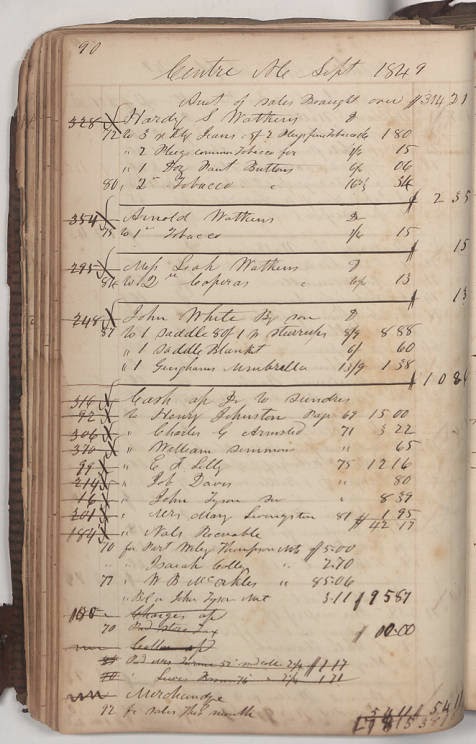 This September 1849 entry is of a different sort. It completes the September listing of accounts with the "W's". Hardy S. Watkins, Arnold Watkins, Miss Leah Watkins, John White.  After that, it has a list of payments on account.

Of course, the person of interest for me in the above document is the name of my Fourth Great-Grandfather Job Davis, who was quite aged by then and lived about another 3 years after this. 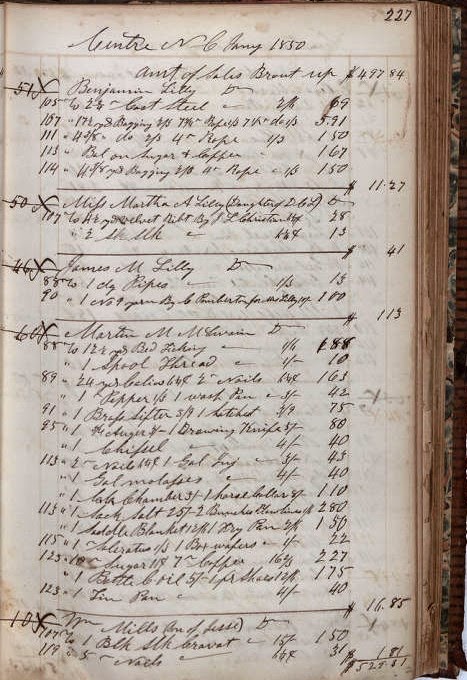 The name listing is in the "L's".  A number of the Lilly family lived along the river and near the forks, just above which Norwood, or Center, This listing shows how sometimes, these ledgers can solve mysteries on how exactly these families are interlinked by naming relationships. In this listing, there are two.


In February of 1851, Jesse Mills will marry Keziah Murray, sister of Priscilla and Moriah mentioned above. In the 1840 census, it appears as if he was married with children, but by 1850, he was boarding with someone and obviously alone. And by 1860, Keziah Murray has gone back to her maiden name, and no sign of Jesse Mills anywhere. This record at least gives a link to his family. He was the father of William Mills, who does show up in later records.

Center now indicates the Township, or area around Norwood and its voting district. It originally got its name, I have heard, because it was the Center of the road that went from Cottonville, a successful cotton-producing area at one time larger than Charlotte and Allenton, which was located east of the forks and on the lower Yadkin/PeeDee and was the earliest 'town' in that area. It was also a crossroads of that road and the old Salisbury to Cheraw road that went through Stanly County and down through Anson, the basic path of Hwy 52 today.

These scanned treasures are available online through digitalnc.org, one of North Carolina's true genealogical treasures.

Posted by Jobs Children at 2:47 AM