William Riley Ramsey and the Trail to Burke County

William Riley Ramsey was the oldest son of Samuel Ramsey and Rebecca Helms Ramsey. He was born in Anson County, North Carolina around 1824, and grew up in Stanly County, along the Rocky River in the Southern part of the county and died about 1865, or definitely between 1864 and 1870, in probably Caldwell or Burke counties of North Carolina. His story is a solemn one.

The 1850 census finds his as a young man of 23 still living in the home of his parents, in the Smiths township of Stanly County, along with young siblings Jane Louisa, James Thomas, John Franklin and Gilliam O. Ramsey.

Shortly afterwards, he must have taken a wife, Elizabeth, as his oldest child, Solomon, is born May 15, 1860. The 1860 census shows William, Elizabeth and most of their children.
These were Solomon, George Samuel, Rebecca Elizabeth, James Allen, and John Calvin. Mr. Gilbert and his infant daughter were boarders only, as far as I know.

And then came the War. William the brother, however, remained in Stanly County and then by 1880 had moved to the Deweese community in neighboring Cabarrus County.

In following the military career of William Riley Ramsey, son of Samuel, we could determine which records were his by his occupation, as a mechanic, and also by the course of actions he took, and the ailments he sufferered.
Wife Elizabeth likely waited patiently for his return in Stanly County. He enlisted on May 29, 1861. Son William Owen Ramsey was born on July 12, 1862 in Stanly County.

The Muster Rolls for 1862 state that William R. Ramsey was at Camp Alamance on June 20, 1861. He was in Captain Junius Hill's no 6 Regiment.

Enrolled for active service in Charlotte on May 29 by J. L. Hill. Mustered in at Camp Alamance on June 20 "for the War" by J. G. Martin.

By the Nov and Dec. 1861 muster, a Major Cameron counted him as "Present".

In March and April of 1862, a Major Rodman recorded his as 'sick in camp'.

In May and June of 1862, Major Rodman recorded "Present. Half months pay forfeited by sentence of court martial."

Did he sneak home during this time?

In July to October 1862, a Captain Hughes recorded him as "Absent. In hospital sick".

In Jan and February of 1863, Captain Hughes was still recording him as "Absent...Hospital...Sick."

In March and April of 1863, Captain Hughes recorded, "Deserted from Hospital".

In May and June of 1863, Captain Hughes recorded, "Absent. Insane Asylum".

In July and August of  1863, Captain Hughes recorded, "Absent, Insane Asylum at Raleigh".

In Sept. and October of 1863, Captain Hughes gave a little more information. "Absent. Sent to Richmond in August of 1862. Now at Insane Asylum in Raleigh, NC. "

Nov and October of 1863 held the same information.

January and February of 1864 gave new information from Capt. Hughes, "Sent to hospital at Richmond."

By May and June of 1864, he had been transferred back from Richmond, Virginia to the Insane Asylum in Raleigh again, and was still there in July and August of 1864.

On the September and October 1864 muster it was recorded, "Deserted from Insane Asylum in Raleigh". 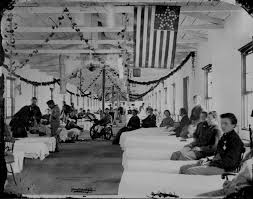 So what happened to William Riley Ramsey when he escaped from the asylum in Raleigh on his second trip?

Where did he go?

The one thing that is known is that he found his family. Did he meet with them in the dead of the night in Stanly County and whisk them away to the mountains, or did he hide in the foothills near Lenoir or Morganton and have his family travel into western North Carolina to meet him?

The youngest two children of William Riley Ramsey and wife Elizabeth were William Owen Ramsey, who was born July 12, 1862, which means he was concieved in the early fall of 1861, after his father had mustered in to the service. So it appears, Mr. Ramsey had a habit of slipping home, perhaps. William is said in family records to have been born in Stanly County. It is the birth of the youngest daughter, Maggie, that proves he made it back to Elizabeth after his escape from the Raleigh asylum in 1864.

Maggie Ramsey Clark's records have her being born in November of 1864 in Caldwell County.

Oral family history states that William Riley Ramsey died in the year 1865 of measles. He might have contracted these during his stay at the hospital. It is unknown where he is buried.

It certainly appears that W. R. Ramsey was not cut out for war. He had a history of illness and a bitter love for family that had him risk all to get back to them before he perished. What brought him to the insane asylum? Was the tragedy and gore he saw around him too much to handle? Or was it an invented illness in order to get off the battlefield long enough to lie in wait until he saw his chance to escape.

What is known is that he did not appear with his wife and children in the 1870 census of Burke County.

And from here, the story continues with the family.

The above is the Find-a-grave entry for Ellizabeth Ramsey. This person has her listed as an Arrowood. Looking at the records of the children of William Riley Ramsey and Ellizabeth tell another story.

In 1879, Elizabeth is granted a widow's pension for William's Civil War Service. 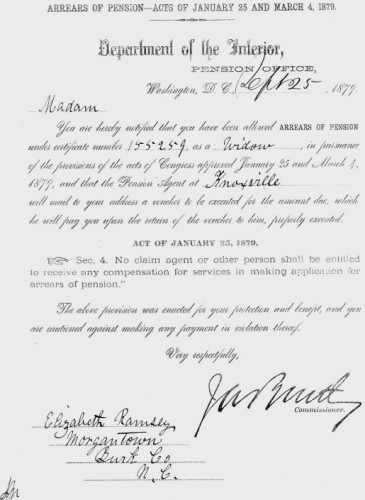 1880 found Elizabeth maintaining a farm, easily, with the help of her 4 adult sons. Two of the children from the 1870 census are missing from the household.