I love browsing through old newspapers. It's interesting seeing how public opinion changes, while human nature does not.

The following "obituary" was printed in the "The Morning Post", a Raleigh, North Carolina newspaper on December 25, 1898. I'm always scanning for things pertaining to Stanly County.

This type of article would never appear in a modern newspaper due to our 'sue-happy' society.  Survivors of Mr. Hinson would not want the truth of his departure to be publicized, but 117 years ago, truth was not suppressed due to the fear of retaliation for defamation of character.  Back in the day, they figured ones behavior spoke for itself.

I'm featuring it for his descendants, of which I am not one,for knowledge of his cause of death and perhaps the date as well. So, if you are a descendant of a Mr. Hinson, who you know died in 1898, or who does not show up in the 1900 census and you've been trying to find out why, he may be this poor unfortunate Stanly County native who fell off a mule. 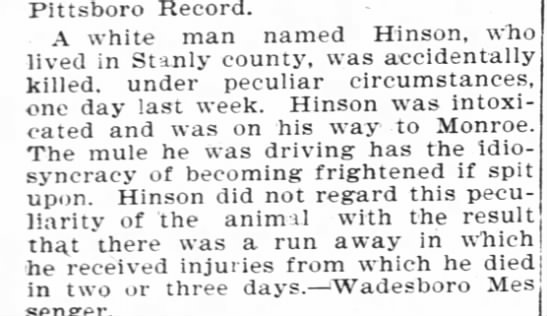 Posted by Jobs Children at 5:34 AM