The Demise of Neddy Davis 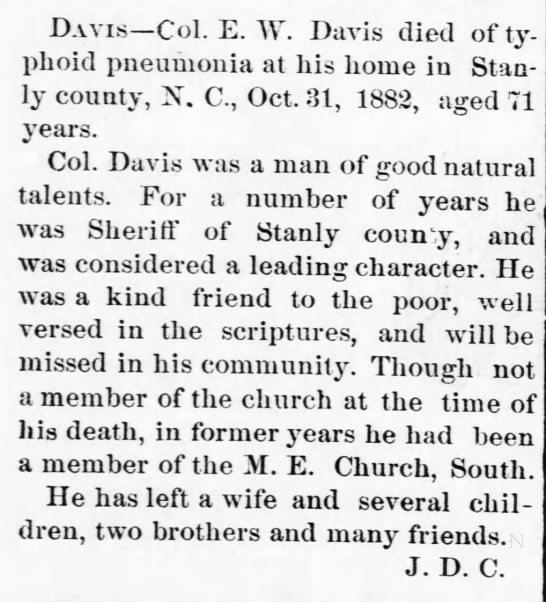 I love it when I am looking for one thing and accidentally come across a gem like the above obituary of my Great, Great (a number of these) Uncle Edward Winfield "Neddy" Davis.

E. W. Davis was the third son of Job Davis and the seventh child of Sarah Winfield Howell Davis. He was also the second sheriff of Stanly County and very active in county affairs during his lifetime. He was a notoriously eligible bachelor and did not marry until he was 56 years old to Miss Rebecca Hathcock. There were 3 Davis children born prior to his death: Sarah Hortense Davis (Stewart), Thomas A. Davis and John T. Davis. (I still have questions about J. T. who is sometimes seen as John T. Crump, Jr. and his mothers second husband was....John T. Crump, Sr.).

There are some signs in E. W. Davis's legal papers that suggested that he could be a tough character and a ruthless businessman. But there are many more that suggest his strength, charitable nature and compassion. At any rate, he was a notable character and a noble man, and upon the death of his older brother Henry, and even prior to that, upon Henry's fall from grace as a judge, Major and county leader to an alchoholic, he took over and oversaw the welfare of Henry's wife/widow and children. My great-great grandfather, Horton H. Davis, lived with his uncle during his teens and later returned the favor and saw to the affairs of his uncles widow and young children after his demise.

Edward Winfield Davis was born December 3, 1811 and died October 30, 1882. I never knew a cause of death, but as he was in his later years, it did not seem relevant. I  am glad I was able to discover a cause of death for other researchers. 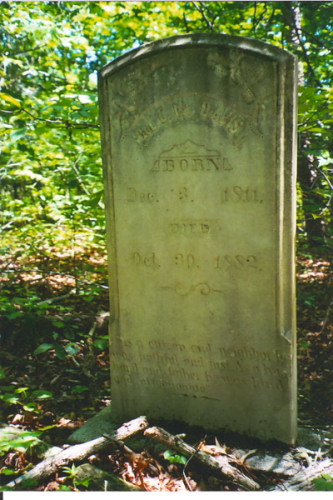