There are many people all over the nation, and even eventually, all over the world, who have roots that lead back to our little area of North Carolina.
Our history was affected by several waves of migration that took place during the 19th Century for various reasons: land grants, wars, exhausted farmland, fortune, or the endless search for good bottom land. Many people, devastated by the after-effects of the Civil War went west to attempt a 'start-over', others moved south and west in order to escape debts, crimes, or bad memories. Others had hopes of something better, bigger, brighter. But from the beginning of the settling of the Americas by people from other lands, there has alway been those two groups. One sibling will head west, another will stay where they are. That is how the west was won, and also how the east remained populated.


Among the families that moved west off the Rocky River, from the linked counties of Stanly and Anson, were the related families of the Howells, Lisenbys' and Threadgills. Several of these relatives and neighbors would migrate together,imagine a wagon train, and would remain together after settlement, a fairly insular congregation for the first and second generations, leading to modern people who live there and have several, not just one, links back to the same area of North Carolina in their family tree.

DNA and genealogy have led me to meet several wonderful and interesting distant (in miles as well as family trees) cousins. One of these persons is my dear cousin Gene, with whom I communicate regularly. We are both Winfield descendants. While I am descended from Sarah Winfields second husband, Job Davis, Gene descends from her first husband Richard Howell. 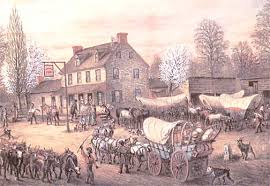 One of her ancestors, Holden Stokes Lisenby, wrote the following hymn  during his migration to Alabama in 1857.

He was the son of Thomas Lisenby and Rhoda Green Lisenby.

In 1837, he would marry Rebecca Threadgill, born March 13,1822, daughter of Randall Threadgill and Martha Lothrap Threadgill (or Lowthorp, etc. This name is spelled multiple ways and I also have a Lowthorp/Lathrop/etc. in my line).

This marriage would produce 8 offspring:

The family would migrate to Alabama in 1857. The 1860 census was the last census that Rebecca Threadgill Lisenby would appear in.


In 1865, Holden Stokes Lisenby would marry Margaret R. Henley, who was born either in Georgia or Alabama. This marriage would produce 3 children:


Mr. H.S. Lisenby passed away on May 7, 1908 in Marengo, Alabama. His beautiful hymn, composed on the long trip from Anson County, NC to Marengo County, Alabama, survives him.

His daughter Martha Asbury Lisenby would marry John Floyd Howell, another Anson County native who migrated West. John Floyd Howell was the son of Peter Howell and Elizabeth Floyd Howell, who farmed in the Cedar Hill area of Anson County, just south of Norwood and just across the Rocky River from Stanly County, near Concord Church.  Peter Howell was the oldest son of Sarah Winfield by her first husband Richard Howell and was the stepson of Job Davis. Elizabeth "Betsy" Floyd was the daughter of Josiah Floyd (III) and wife Mary Tillman Floyd, with whom Job Davis would migrate from the Mecklenburg / Brunswick County area of Virginia, to the Rocky River/ Yadkin /PeeDee area of Anson/Montgomery/Stanly County area of North Carolina in 1794.

My cousin Gene, an octogenarian, is the granddaughter of this couple. While her ancestors were among those who migrated West, mine are among the ones who stayed put.

With improvements and discoveries in DNA continuing, and research materials being continually made accessible online, the vast family connections across America will continue to be linked and distant family members able to find each other and share information.

And beautiful discoveries, like this heartfelt hymn by a devout traveler may yet come to light.

Posted by Jobs Children at 8:11 AM