I recently gained a renewed interest in the Howell family and decided to look down a few avenues I've not dwelt among lately. Following the children of Peter Howell, oldest son of Great (x) Grandmother Sarah "Sallie" Winfield Howell Davis, I'd mostly concentrated on his sons, and not on the daughters.

Several of Peter's daughter did not marry, as evidence in their selling of their share of Peter's estate in the late 1860's and early 1870's. (See Anson County Deeds )

One daughter, Julia A. Howell, did marry however, and a small delegate of descendants remain today. 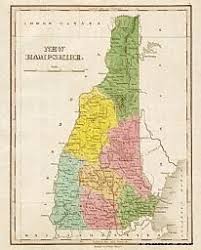 Julia married an impressive Northern gentleman, John F or K Capron  probably around 1859 or 1860. Julia is living with her parents in the 1850 census, and in the 1860 census, she has married Mr. Capron, nearly two decades her elder, and is living right next to her parents in Anson County in the Cedar Hill community.


John F Capron is listed as a Carriage Maker with a personal property value of $250. Other neighbors include John F. Kendall, a physcian and Woodson and Sally Davis Crump, Sally being Julia's first cousin.

John F. Capron may have had a previous family. That part I've not discovered yet. Family trees have him as the son of  Silas Capron and Sylvia Foster Capron, who were born in Massachusetts and moved to New Hampshire to raise their families. I'm not sure I agree with those trees, as that couple seems a little young to have been the parents of John K. Capron, who was born in 1806. 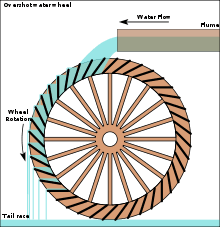 John F Capron may have came to North Carolina with the Capron Water Wheel Company, who is shown in deed in Cumberland County purchasing a site from David Kivett and Sons. Capron was not a Carolina surname. Julia's uncles, John W. Howell and Jordan Howell were businessmen in Fayetteville, a thriving market town of the era, and may have been the link between the middle-aged Mr. Capron and their 'old maid' niece, Julia, now in her 30's.

Searching old newspapers, I found this court notice, that shows John F. Capron may have been in Davidson County before coming to Anson and Stanly County. 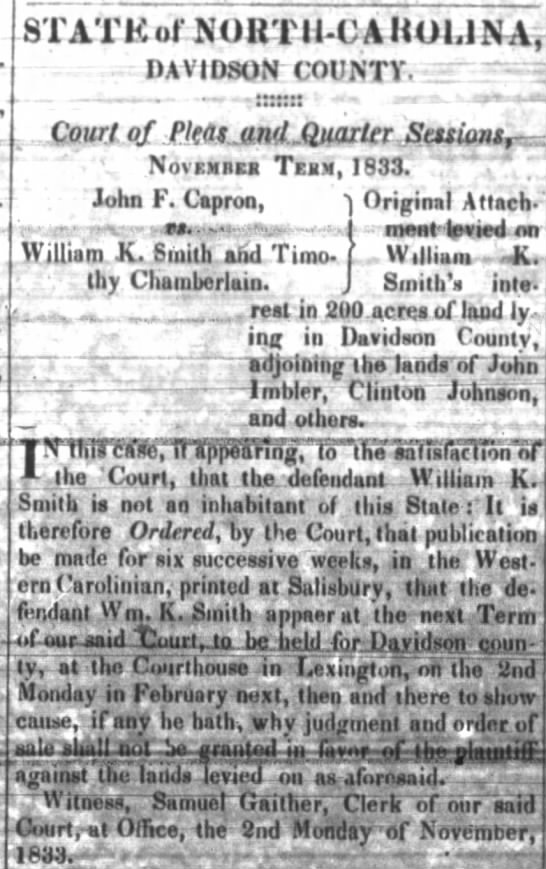 By 1870, John K and Julia had become the parents of three sons:

Peter Howell Capron, was the oldest, named for his grandfather, Peter Howell. John was next, born about 1866 and Edward Orford Capron was the youngest, born about 1868. Having married late helped the Caprons become a very small family for the times.

J K Capron and family had moved to the Harris community of Stanly County by this time, and he was listed as a mechanic. Neighbors included Ritchies, Penningtons, Cranfords and Biles. It looks like the location may have been in or near the modern town of New London.

The only deed involving the Caprons in Anson County was one dated 1871 in which J F Capron and wife Julia sell to James E. Howell, her brother, their share of the inheritance of the their father, Peter Howell's estate, a tract on the Rocky River, in Anson, from the Caprons of Stanly County, adjoining the lands of Dr. John S. Kendall, John Wall and others. "Known more particularly as the Howell lands, where Peter Howell, late of Anson, lived and died and containing 500 acres more or less." 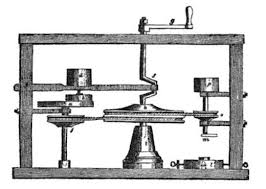 On October 16, 1868, John F. "of Anson"  bought a tract of land from Daniel Freeman, "all my interest, being one half in the tract of land known as the John Stokes land." Neighbors to this tract of land mentioned were Travis Carter, Jarrett Russel and Thomas Rice.

On January 4, 1871 is a very interesting transaction from Book 7 Page 270 of the Stanly County, North Carolina deeds: "This Indenture between... John Tyson, Jr. Administrator of Peter Howell....undivided three hundred acres of land lately belonging to the intestate Peter Howell known as the John Stokes (or Stoker) tract.....John F Capron became the last and highest bidder...lying in Stanly County on the waters of Mountain Creek....Jarrett Russel's line, Lewis Carters line...Thomas Rices line...    Sounds like the same tract of land mentioned above.

P.W. Melton in this deed would have to be Preston Wooley Melton, son of Joseph D. Melton, the shoemaker. Joseph D Melton lived long and left a long and mysterious trail. I've been working on finding information on this gentleman for awhile and he was quite the charactor and the oldest son of John Melton Sr. of Granville and then later Montgomery/Stanly County.

P. W. was one of the 'middle' children of Joseph and later on in life migrated to Arkansas, where he died. The younger P. W. Melton, or Milton, as the spellings continually crossed, was the son of his younger brother William, who lived with P. W. for awhile in his early adulthood, and the nephew P.W. was Preston William. 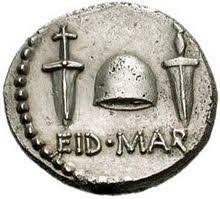 This document was the mortgage or collateral loan of a "Spring Wagon" to J. F. Capron, by P.W. Melton. Perhaps in payment for mechanical work done, or a wagon built.

On August 1, 1877, Moses Dry declares himself to J. F. Capron and as collateral offers up a gray mare and a hay wagon.

On January 14, 1887, perhaps feeling death closing in on him, John F. Capron began selling off his property. He sells a tract of land to G.W. Jenkins, adjoining G. W. Jenkins, Giles Bowers, J. F. Capron and others, 10 acres of land.

By July of 1887, J. F. Capron was becoming weak, ill and feeble. He would have been about 81. For the incidental sum of $1.00 J. F. Capron gave to J. D. Stoker his property "on the east side of Cloverfork Creek and the West side of Long Branch" bordering Richard Morris, Eleazor Coggins, Lewis Carter and others, 'known as the John Stokes lands'. In exchange, J. D. Stoker " shall keep, maintain and support the said J. F. Capron during the remainder of his natural life in a good and comfortable manner, suitable to his degree and condition in life and shall well and truly furnish him all necessary and proper food, clothing and medicine and other necessary attention and assistance, as long as the said John F. Capron shall live and also the said J. D. Stoker shall furnish and erect at the proper place, three tombstones to be at least three feet high and good Marble with proper engravings, whereon one for Julia Capron, wife of John F. Capron, one for Fletcher Capron, his son, now deceased and one for the said John F. Capron, after his death. And if the said J. D. Stoker  shall fail to perform the conditions above, then this deed to be null and void.

By naming son Fletcher as already deceased, it might be assumed that Peter Howell Capron and Edward Orford Capron might still be alive and that "Fletcher" would be John Capron, Jr. and the "F" in both middle names standing for Fletcher.

In the 1880 census, John F. Capron was seen as a Maintenance Mechanic with 3 young sons. Howell in 1870 is now "Peter H.", letting us know his name was Peter Howell Capron for Julia's father.

The reason John F. Capron did not sign his property over to either of his two surving sons was that the entire family was, and had been sick for sometime. Perhaps with thyphoid fever or some other malady of the time.

This sick in April of 1886 and assigning all of his property over to a friend in July of 1887, John F. Capron probably expired not long after that. The one of his 3 sons that did survive the illness however, was Edward O. Capron. His own obituary explains a bit of when the remainder of his family may have died. 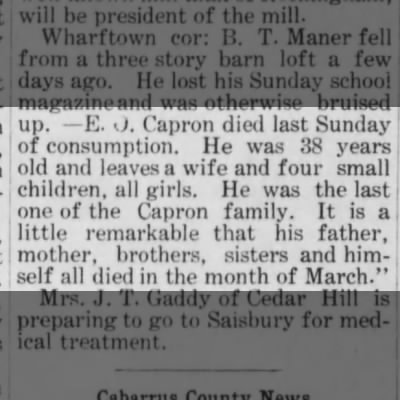 According to the 1906 Stanly Enterprise, April 5 edition, the Capron family all died within the month of March and suggests that John F. and Julia may have had at least two daughters in addition to their 3 sons, who did not show up in a census.

Edward O. Capron did not remain in Stanly County, but his name appeared in some deeds prior to his removal.  He apparently first moved to Anson County, in the area of his Howell grandparents home, after his parents death.

On January 7, 1891, J D Stoker and wife R. E. Stoker of Stanly, the family who took care of John F. Capron in his old age sells to E. O. Capron a tract of land in Harris township in Stanly County, adjoining Giles Coggins, G. W. Jenkins and J. D. Stoker, on Long Branch containing 80 1/2 acres, which was part of the property John F. Capron had sold to them for the nominal fee of $1.00, they sold back to his son for $100. A considerable profit for the time.

On the same day, E. O. Capron of Stanly County, for $300, sell sto J D Stoker, a tract of land adjoining the lands of John Howell, W. W. Rusell and Nathan Thompson, located in Harris Township on Cloverfork Creek, containing 80 1/2 acres. It appears a 161 acre tract may have been split in half.

There are no more deeds involving the Capron family in Stanly County.

To follow the only surving child of Julia Howell from here, we have to go back to the Howell family and the Threadgills, a related family.

Edward O. Capron married Annie Lenora Threadgill in 1893. She was the daughter of Patrick Randolph Threadgill and wife Lucy Carolina Gray. Annie was interestingly enough born in Mississippi and the couple were married in Virginia

Patrick Threadgill was a member of the Howell family, however. He was the son of Thomas and Martha Threadgill and his mother was widowed young, remarrying to Richard Howell the second, a brother of Julia Howell Capron, Edward O's mother, making Patrick Richard's stepson and Edward and Annie stepcousins.

Before picking up with the Threadgills and Edward and his family, it is to be noted that although he relocated with Patrick Threadgill and family to Pacolet Mills in South Carolina and the rest of his family is buried there, Edward O. Capron is buried at the Concord United Methodist Church Cemetery in the old Cedar Hill Community in Anson County. This church was built on the old Peter Winfield plantation, Edwards Great-Great Grandfather. He is the only Capron listed among the readable tombstones. Due to this fact, it is my belief that Edward was brought back to be buried with his parents and siblings. It makes no sense that he would be transported back up to North Carolina for no reason. Did Mr. Stoker actually buy the nice marble tombstones that J. F. Capron requested to mark his grave and those of wife Julia and son Fletcher? Or not? Were the locations of these graves lost after E.O Capron was buried?

I believe that Peter Howell and wife Elizabeth were probably buried in this cemetery as well. There are a large number of unreadable tombstones and no longer marked graves in this ancient cemetery. It also would make the most sense that John F. Capron and wife Julia, along with sons Peter Howell Capron and John Fletcher Capron, Jr. and possibly some young daughters, are buried there too, all possibly dying in March, the month of doom for Caprons.

Posted by Jobs Children at 7:36 AM