John B. Simpson, to me, is one of the more interesting members of the family. Perhaps because he lived a long life and also because a bit of information can be had on him. 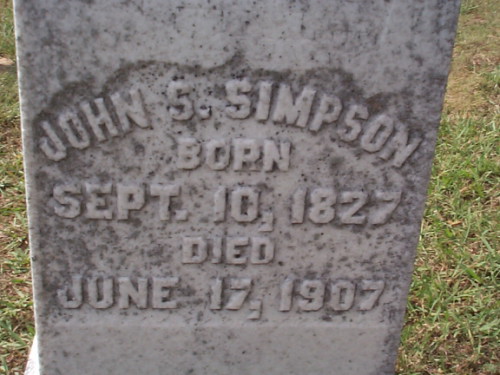 John B was born around September 10, 1827 and died on January 2, 1907. His tombstone had to be incorrect for date of death, as his obituary appeared in the Carolina Watchman in January of 1907 and his widow remarried in March of 1907.

He first appears in the records of Stanly County in the Mary 1847 session of  The Court of Pleas and Quarters, "Jesse Hathcock appointed Guardian of  Delila, John B. and Ruthy Simpson, gave bond of $300 with Green Palmer and Newton Howell as securities."

Related to the above were these entries from the February Session of 1841, Nathan Simpson relinquished guardianship of Thomas Simpson's heirs and Jesse Hathcock was appointed Guardian, gave bond of $400, James Hathcock as security.


By August Session 1849, John B had aged enough to serve on a jury, as he was listed among the jurors for The State vs. Thomas Burton.

John Brantley was the only son of Thomas Simpson II, son of Nathaniel Simpson and grandson of Thomas I. Thomas I inspired a lot of grandsons and great-grandsons named for him, and keeping them separate is a little tricky.

His mother's name was Judith and after the death of Thomas Simpson, she married Benjamin Franklin Cagle. Their marriage was not a long one, either, as he passed away in 1843.

It is thought that perhaps Judith was a Hathcock prior to her marriages, daughter of Jesse Sr. It is known that he had a daughter of the right age range to have been Judith Simpson Cagle, named Judith or Judy. No marriage license exists, however, as Montgomery was a burned county and Stanly was part of Montgomery until 1841.

John B. Simpson married Ursula Lowder, daughter of George Lowder and Elizabeth Adderton Lowder around 1848. They became the parents of 6 children:

It is unusual that they named a daughter "Doctor" or "Dockey", but I'm sure there was a story behind it. Docky married Frank Melton and Frankie married David Melton, when he was late in life. Both were 'second wives'. Sarah F. also became a 'later in life' wife, of Oliver Harrison Whitley. Only son, George Thomas Simpson married Henrietta Thompson, daughter of  Thomas Thompson and Mary Ann Smith.

This peculiar marriage record was found on family search.


John B. Simpson served in the Civil War along with his uncles.

Newspaper reports would later refer to him as Colonel.

A boy, John Farmer , was bound to John B in the November, 1855 Session of Stanly County Court. By 1860, the boy, John, had been reunited with his siblings, but was living in the homestead of James F Kendall, instead, along with Lydia Adeline Murray, daughter of Mariah Murray, whose estate had been administered by John B Simpsons contemporary uncle, Green W. Simpson, being only 4 years his elder.

In the Bastardy bonds for Stanly County appears this document: 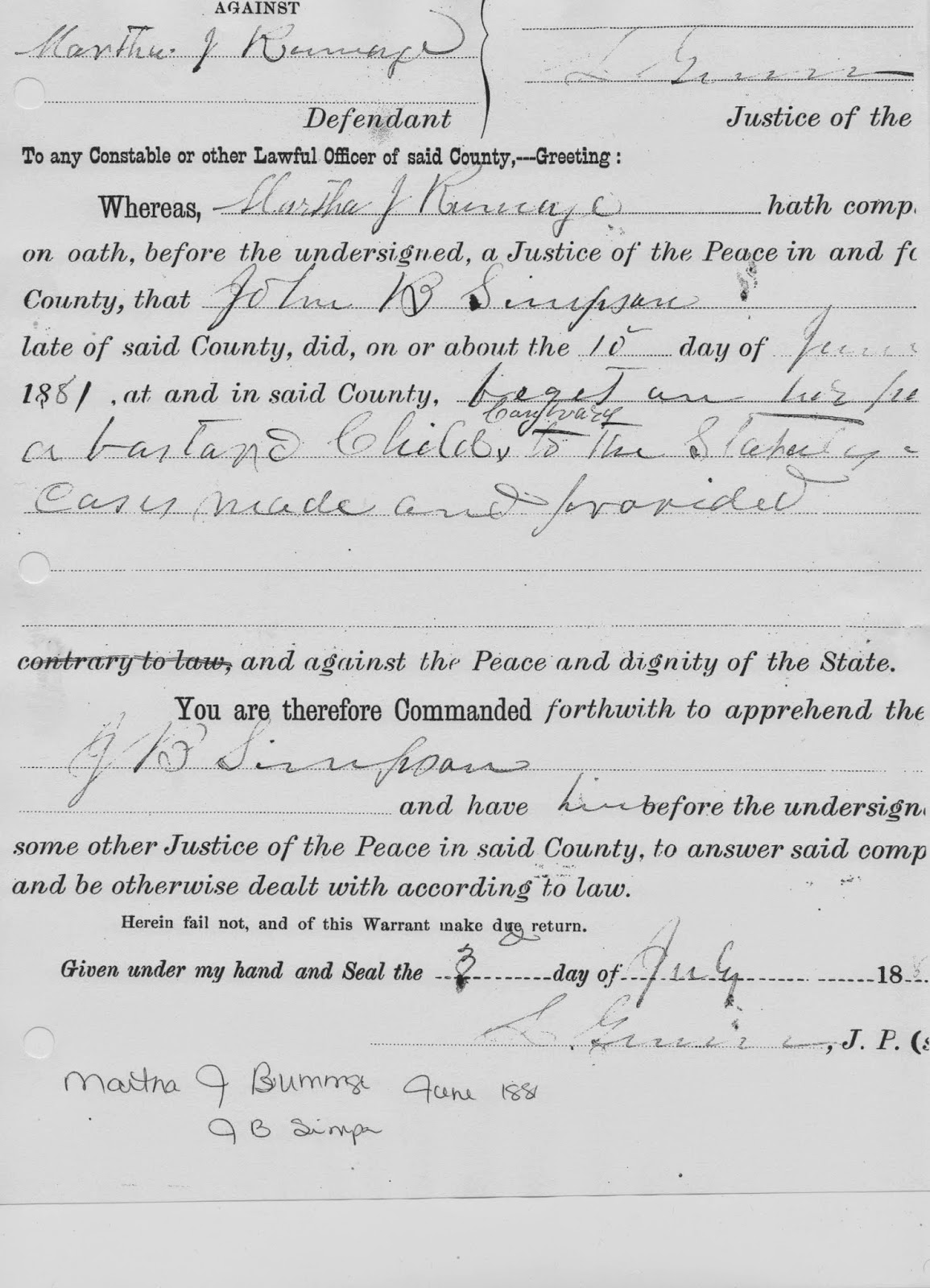 In 1881, nearly 20 years after his last child with Ursula was born, John B. Simpson had an affair with Martha J Rummage, that resulted in his becoming a father at 54 years of age. That child was Lee Allen Rummage and Martha Jane Rummage was the second cousin of J. B. Simpson, being the daughter of David Rummage, whose mother Margaret "Peggy" Simpson was the sister of John B.'s father Thomas. Martha Jane Rummage was about 30 and not a stranger to out-of-wedlock children. Lee Allen was her fourth child.


John B. Simpson now had at least 2 sons.

He was to make the newspapers in 1884, when his home was destroyed by a storm, either a hurricane or tornado.

Despite John B. Simpson having had an affair with his distant cousin in 1881, his wife Ursula did not leave him, as was most often the case in the days when divorce was difficult and women had few options with which to support themselves with and older women, none.  They were living together in the 1900 census, their own children already grown, or passed away.  And then another tragedy hit the family, and made the papers. 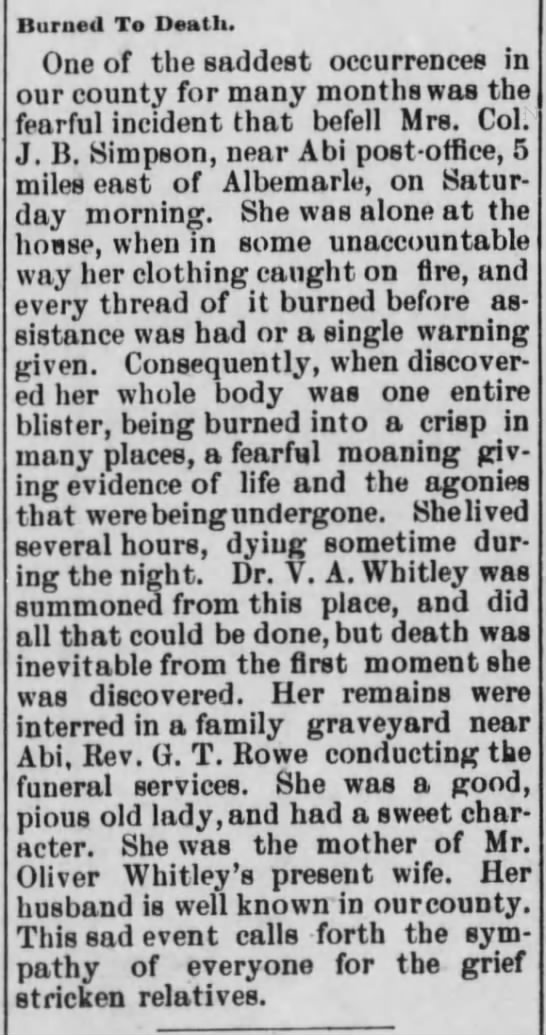 Ursula burned to death, and was characterized as a sweet lady.

John B Simpson, despite being on in age, wasted no time after the death of Ursula and found a new wife.

On January 27, 1902, he married Martha F. "Patty" Randle, the daughter of  Isham Randle and Carolina Carpenter Randle. John B was 53 years older than Patty, and married the 23 year old when he was 76. Amazingly, they had one child, his third and last son, Robert Lee Simpson.

Patty would waste no time in marrying George Hinson, as well, just 2 months after John B. Simpson's death in 1907.

He began getting ill in 1898, however, and actually moved in with his daughter Dockie Jane Simpson Melton, and her husband, Frank Melton, also a confederate veteran. 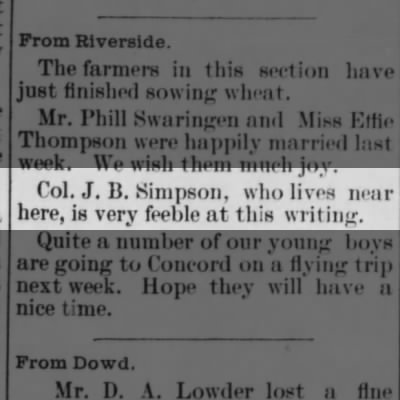 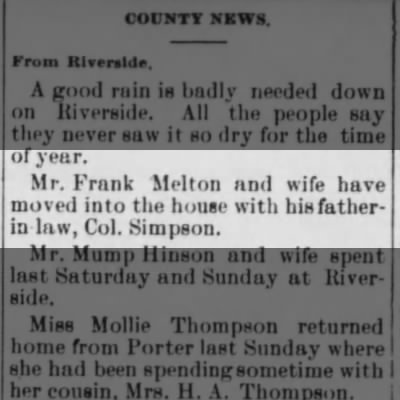 Perhaps his son-in-law and daughter helped to take care of the old vet.

The Salisbury paper would post a notice of his death in 1907.

John B. Simpson's death was noted in the list of Vets, along with Job's grandson and my ancestor, H. H. Davis.

The old rebel and grandson of Nathan Simpson left a few traces of his path in life. He stayed near his homeland and fought for it. He will always be remembered.

Posted by Jobs Children at 9:43 AM